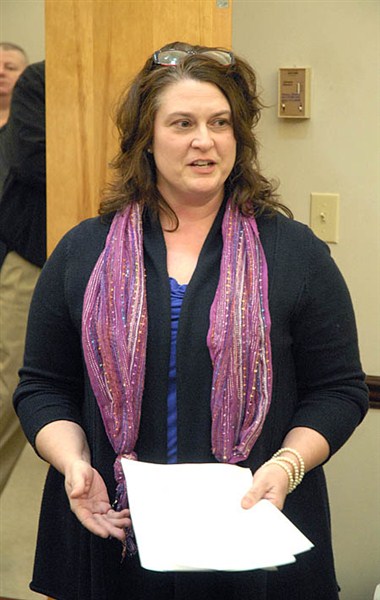 Teacher and mom Anna Koshenina spoke before the school board on the possibility of adding soccer to the athletic program at Water Valley High School. 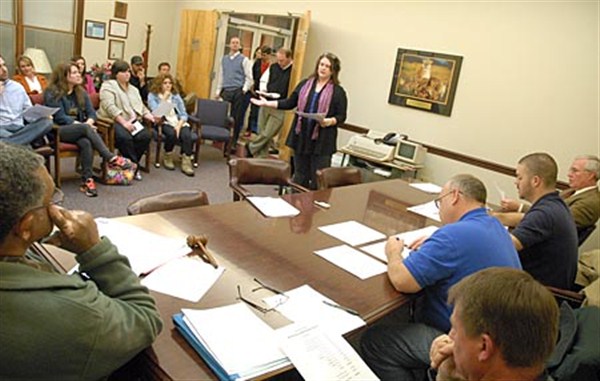 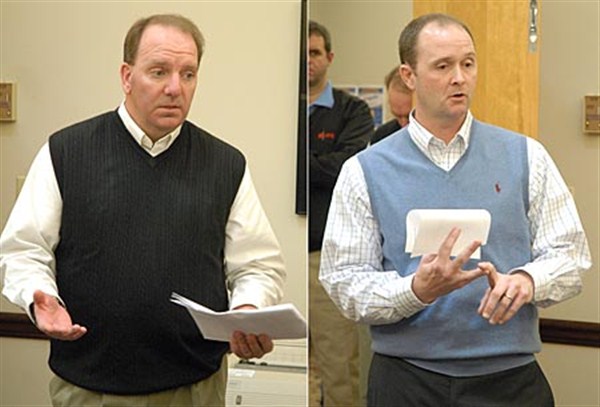 
WATER VALLEY – Soccer supporters made a fourth appearance before the school board Monday night in their quest to bring the sport to Water Valley High School.
WVHS English teacher and student council sponsor Anna Koshenina, who also described herself as Mom to Greta and Jackson Koshenina, spoke first telling trustees that there are a lot of kids who love soccer entering the 7th grade next year. “More than usual,” she said.
“We think the time is right with all the support we have from the community and the support we have from some of the faculty members and the number of children we have interested in it.”
She added that as student council sponsor she had 9th through 12th graders asking her about a soccer program. “I like to think my student council does a good job of fielding things that the students want in the school.”
“Students are asking, ‘Could we add soccer?’” said Koshenina. “So, parents got together and that’s why these folks and some of the kids who play are here.”
She added that the group had put together a budget in answer to one presented to the board on Jan. on 22. At that meeting Athletic Director Trey Allman gave the board a letter with a $135,791 itemized budget based on making a soccer program equal to the other sports programs already in place. Making sports programs equal is a directive of the school board.
Koshenina acknowledged that there are questions about how the program would be funded once it is built. And, she acknowledged that the school has other needs such as computers. But, she also touted the value of sports programs for motivating students. “The student athletic is usually a harder working student,” she added.
Koshenina said that the soccer parents believe that if a program is started, it could be done for under the amount estimated by Coach Allman. She then presented a $13,170 draft budget proposed by the parents. The group anticipates gate receipts of $3600 and $5000 in booster club funds, which leaves a balance of $4570.

Volunteer Program
She explained that the budget is much different that the budget generated by the school because the head coach positions would be volunteer.
“I know we have the support for this program now. And, I think that we can make it work. I think we can make it a program that will be comparable to the Pontotoc program that took both their boys and girls to state this year. I think we have a bunch of players willing to do it. I think it will motivate them to study harder because they want to stay on that team,” said Koshenina.
She then went over the parents draft budget line by line. The budget is reproduced below. Also presented was a letter from the Magnolia Youth League Board of Directors that states the members voted to allow the school soccer teams to practice and play official games there at no cost.
At the conclusion of her presentation, Koshenina was asked by board president Lamar Burgess who were the purposed head coaches. Koshenina answered that she would volunteer to coach the boys and another teacher, Charla Stark, would coach the girls.
She quickly added that paraprofessionals – “skilled athletes” – would assist. Burgess asked who they are and Koshenina said there are several who have shown an interest, but they would have to apply through the school’s athletic program.

Scholarships Possible
Next to speak was Lance Clement who said that soccer would reach a group of kids that might not play any other sport. He also talked about the possibility of scholarships, noting that the community colleges all offer both mens’ and womens’ scholarships.
He emphasized that because the number of schools offering soccer is smaller, so is the pool from which colleges can draw, enhancing the chances for a local student to receive a scholarship and further their education.
Jeff Bynum followed Clement and described the Pontotoc program upon which their ideas for the Water Valley program are based. The boys team made it to the north half championship game and the girls played for the state championship, he said.
Bynum added that anyone who has played for their school understands how special it is “to put on that jersey and represent their school.”
“We’re asking for your support to allow the kids who play soccer in our community to do that,” he concluded.
Burgess thanked the soccer supporters for the information. He then turned to the board and asked, “What say the board? Does this change anyone’s mind? Do you want to consider it?”
Receiving no response, he thanked the supporters again and moved to the next item on the agenda.

To Water Valley School Board: