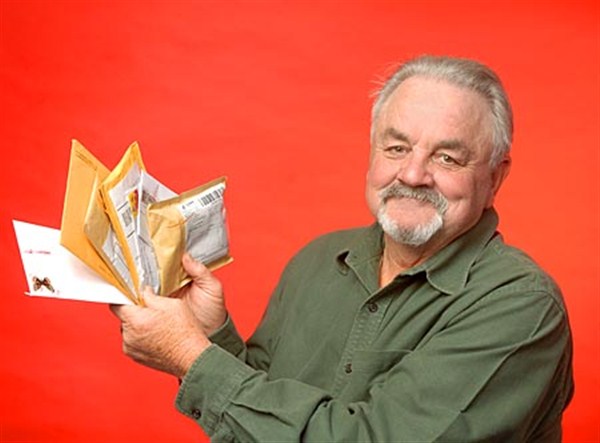 Someone impersonating Jerry Burt “purchased” 13 items from across the world on eBay and had them shipped to Burt’s residence. An investigation revealed that someone had set up a PayPal account using Burts’ name and address. – Photo by Jack Gurner


WATER VALLEY – Everybody has heard of chain mail, but how about chain packages.
Well maybe not exactly a chain, but Water Valley residents Jerry and Doni Burt certainly received a series of packages in some type of scam.
Apparently the unknown scammer purchased more than a dozen items off eBay, all costing less than $5, and used a Paypal account to pay for them.
All of the packages were sent to Jerry Burt. The couple returned home from a trip to Chicago last week and were greeted with the mysterious packages shipped from all across the world.
“They were from the Bronx, New York; Burlington, Co.; Edmonds, Wa.; Shenzhen Guangdong, China; Kowloon, Hong Kong; North Brunswick, N.J.; and Livingston, Texas,” Doni told the Herald.
Naturally they opened the packages and found a variety of small, inexpensive items – camera cards, a camera card adapter and plastic holders.
“I thought, what is going on, he didn’t order any of this stuff,” Doni said.
So the Burts launched their own investigation, first contacting their grandson in Illinois who is a computer whiz.
“I asked him if he ordered any of this stuff?” Jerry said.
Of course the grandson had no idea what they were talking about, but he advised Jerry to track down one of the senders using the return address off of one of the packages and see what he could learn.
“Jerry goggled this person, found his phone number and called him,” Doni continues.
The seller was extremely nice and informed Jerry that he sells stuff on eBay. The item in question had been paid for using a PayPal account.
“Okay, so we thought, Jerry doesn’t have an eBay account, PayPal account, or even an e-mail address, why is this stuff being sent to him?” Doni said.
Meanwhile another package arrives the next day.
“We start worrying about fraud, maybe someone has Jerry’s personal information and got a credit card in his name,” Doni said.
So Jerry checked all of their credit card companies to make sure there are no unauthorized charges. They find nothing.
Next they called the credit bureaus to check if any cards have been issued in Jerry’s name in the past several months. Again, nothing.
That’s when Jerry called PayPal to get more information and report the fraud.
This turned into a two-day fiasco as he attempted to get a real human to explain the situation.
In fact Jerry even raised his voice at the computer a time or two, but to no avail. The computer simply didn’t understand that Jerry didn’t have an account or if he had an account it was bogus and Jerry didn’t have an account number.
“Talk about blood pressure rising, if this wasn’t so serious I would have laughed. I think I did chuckle a little,” Doni reports.
He finally got through to eBay’s fraud department and a real a human the next day and was able to obtain a little information. The account was set up in Jerry’s name and address in January. A total of 13 items have been ordered, all under the price of $5.
The company promptly started an investigation and put a fraud alert on the account.
But it still leaves two big questions? What was the scammer ‘s intent and how did he (or she) pick Jerry Burke of Water Valley?
“I think they picked him because he lives in Mississippi. They might have thought he was just some old country boy that won’t do anything about it,” Doni explains.
As for the scam, Jerry and Doni surmise the scammer was building a history and feedback with eBay, buying these small items and charging them to what is likely a stolen credit card.
“Then they order a big item and change the shipping address directly to them,” Doni adds.
Meanwhile they are waiting for answers. They have filled out a crime report with the sheriff’s department, contacted eBay’s fraud division and the U.S. Postal inspector for possible mail fraud.
Of the 13 packages purchased on the fictitious account, there are several still apparently in route to the Burts including a cookbook CD.
The Burts promise to keep us posted, both on the outcome of the investigation and great recipes on the cookbook CD.