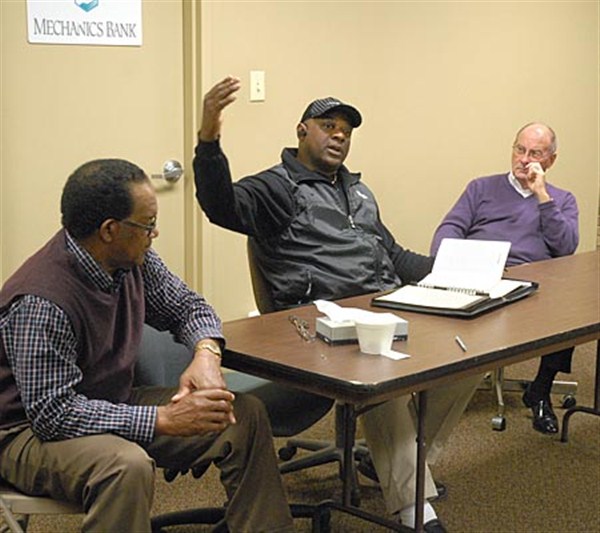 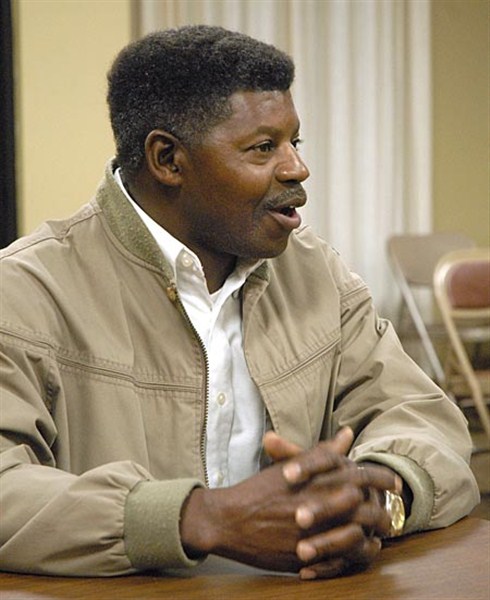 Louis Rowsey, pastor and founder of Highways and Hedges Church, talked about the Boys and Girls Club associated with his church.


WATER VALLEY – A small but enthusiastic group of citizens met Monday night in the Community Room at Mechanics Bank to share their concerns for the community.
Although the entire crowd numbered less than a dozen, organizer Levert Hawkins said he was pleased with the discussion even if the turnout was small.
As the meeting opened, Hawkins introduced Mayor Larry Hart, Police Chief Mike King, former coach and educator Butler McLeod and community volunteer Delice Reese who sat at the front of the room.
One of the first topics discussed was jobs. Hawkins acknowledged that Yalo-busha County officials were probably doing what they could but the county still has a high unemployment rate. “We’d like to see something done about it. Jobs are what keep our youth here.”
Jobs for youth led to a discussion of recreation for youth and the need to attract families. “The perception is that there is not anything for kids to do here,” commented Ramona Bernard.
Louis Rowsey, pastor and founder of Highways and Hedges Church, joined the conversation and talked about the Boys and Girls Club associated with his church. Rowsey said that the youngsters are excited about the club and want to be a part of it. “My biggest problem is getting parents involved with this.”
He added that the church is in the process of getting a grant and they hope to build a club building. Along with recreation, Rowsey said that plans include bringing in tutors to help youngsters with their school work and mentors to show the young people how to become successful.
He added that the club would give youngsters something to do year round. “When they get out of school, we want to be there for them.”
The business community and Main Street were also part of the discussion.  Hawkins said that those who had been in Water Valley all their life could remember how full Main Street used to be. “To see the “Mom and Pops” reestablished in this town would be great,” he said of the small businesses that used to be the downtown mainstays. “We see a lot of our revenue going toward Oxford and Grenada and Batesville.”

Looking Good
After several minutes of discussion about numerous problem areas, Mayor Hart joined the conversation and emphasized that he certainly isn’t distraught about Water Valley. “But, we have a horrible litter problem.”
To correct the problem, Hart suggested getting into the home and into the elementary grades “and start teaching people about littering.”
Hart continued that the litter problem is not just an eyesore, but a terrible expense for the city. “I’ll bet we spend $30,000 a year picking up litter.”
Several in the group suggested a volunteer community clean-up effort. “We set aside a Saturday in the spring and maybe a Saturday in the autumn and do a massive clean-up,” said Bill Warren.
While on the subject of appearance, Cliff Lawson said that some money should be spent creating a professional web presence for the city, which drew enthusiastic agreement from the group. “I think that is a great idea,” said Hart, “and I will pursue that for sure.”
Hart continued that there were plans under consideration to do overlay work on Main Street that will include some additional drains and crosswalks. “Main Street is ready to bloom in Water Valley.”
The final item discussed was the police department’s relationship with the community. Hawkins said that the police should do a better job of communicating. “Somewhere along the line they have lost the trust of the community.”
Hawkins added that the police aren’t able to get information they need to solve crimes because they don’t have a good relationship with the people. “People don’t feel comfortable talking to the police.”
Chief King said that often when the police are dealing with people, it is an adverse situation. “They are breaking the law, that’s why we’re there.”
King added that he would consider the comments and see what he could do about making his department appear more friendly to the public.
He noted that not all people are afraid to work with the police and that the department does solve crimes and does so with the help of citizens. “People don’t commit crimes in front of the police, so we depend on them (citizens) heavily to help us solve crimes.”
King said that he enjoyed listening to the comments during the meeting. “We’re committed to keeping your community crime free so that these business ideas you’re talking about can flourish.”