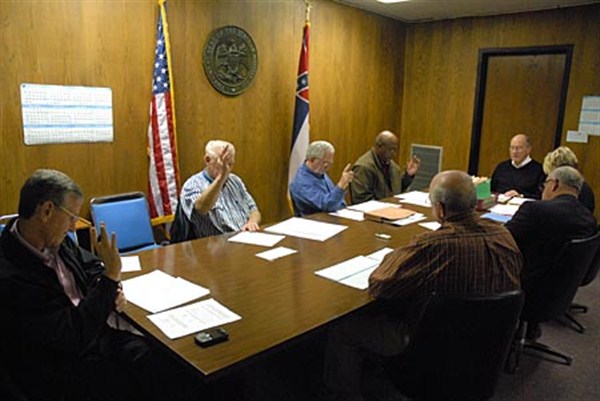 Water Valley aldermen vote to donate an old vehicle to Coffeeville in their monthly meeting on Feb. 5.


WATER VALLEY – About 30 managers from Mississippi Main Street Association northern district communities will be in town March 26 for a regional meeting.
Mickey Howley, manager of the Water Valley Main Street Association, told city aldermen that the northern district represents 30 of the 51 MMSA towns in the state.
Also in his report to the mayor and board, Howley said that the Arts Council will hold their annual fundraising party March 16. “Let me remind you that they have won three years in a row most creative fundraiser in the state.”
Howley noted that the event is the day before St. Patricks Day. “So, this will definitely have a green theme to it.”
He also said that the WVMSA is moving ahead with the pocket park for the empty lot at Main and Wagner Streets. “We picked a design done by MSU landscape architecture student Jerry Hill of Pascagoula.”
Howley added that the property owner, Dick Marchbanks, had okayed the project and work would start in March.
Among other actions at the Feb. 5 city board meeting, aldermen:
• Held a public hearing regarding an amendment for the upcoming city sewer project.
• Renewed the municipal airport lease with the Corps of Engineers to run through 2038.
• Paid invoices related to the “spec” building on the old Bondafoam property north of BorgWarner.
Goodwin Construction Company received $85,575.87 and Willis Engineering received $5,531.89.
• Accepted culvert bids from G & O Supply Co. and Advanced Drainage Systems.
• Donated a non-operable vehicle from the police department to the Coffee-ville police to use for spare parts.
• Agreed to provide Eddie Foster with a quitclaim deed to a surplus piece of city property – a former ally – near Clay and Price Streets.
• Heard that the city would observe President’s Day on Monday Feb. 18.
• Adjourned in just under 15 minutes after holding a public hearing and then meeting in regular session. The next meeting of the mayor and board is scheduled for March 5.