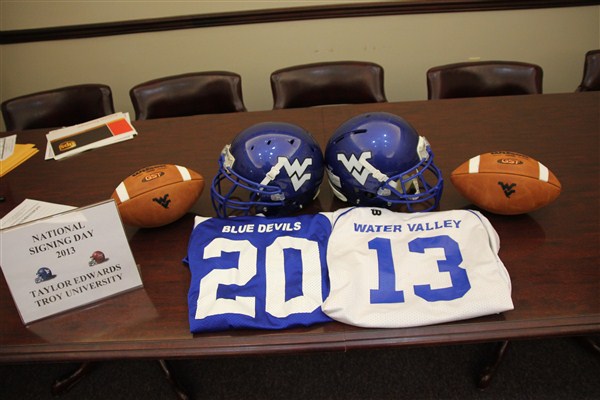 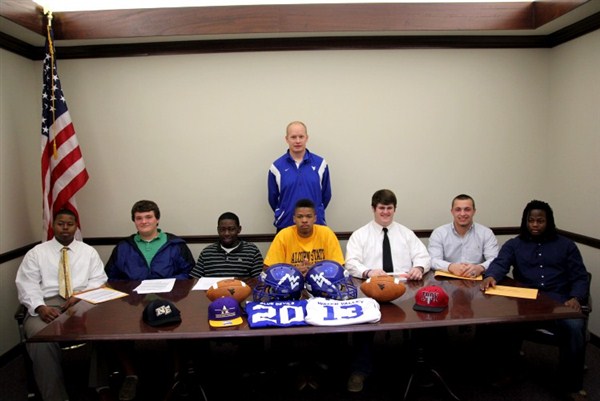 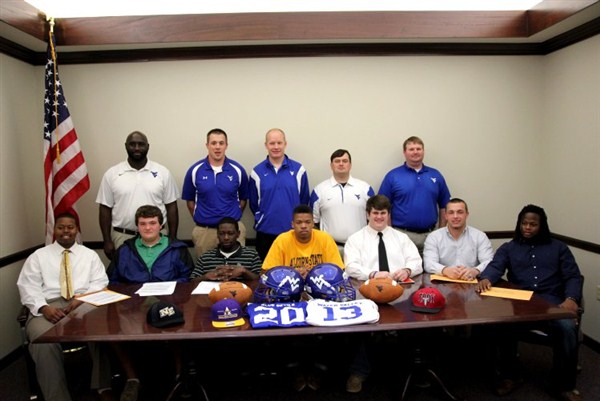 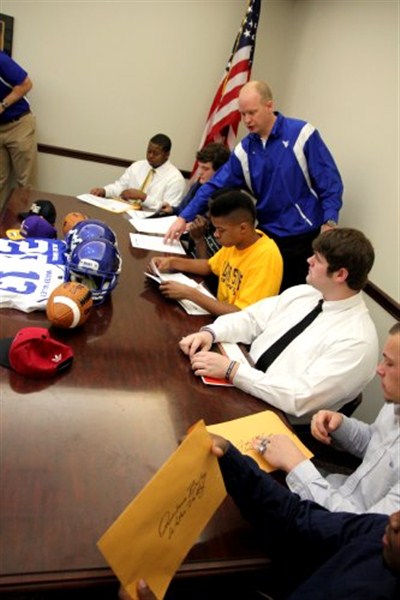 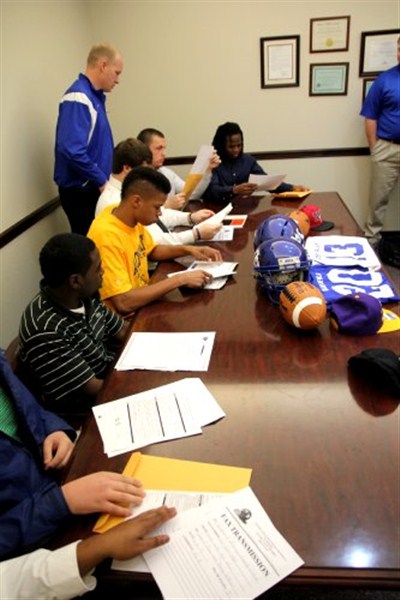 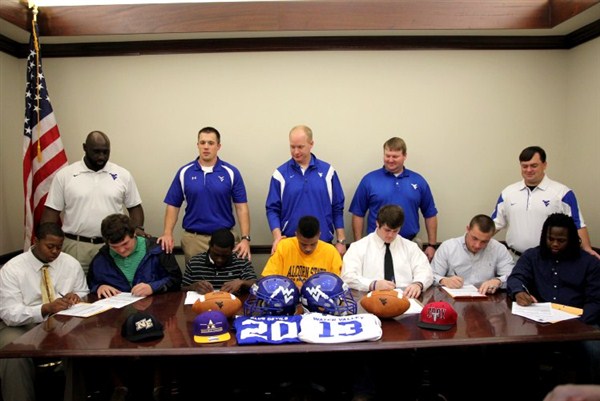 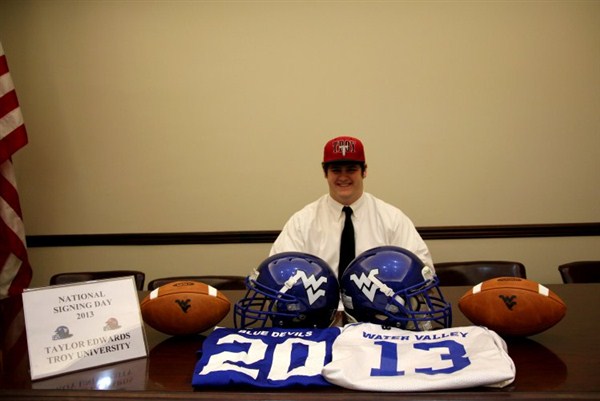 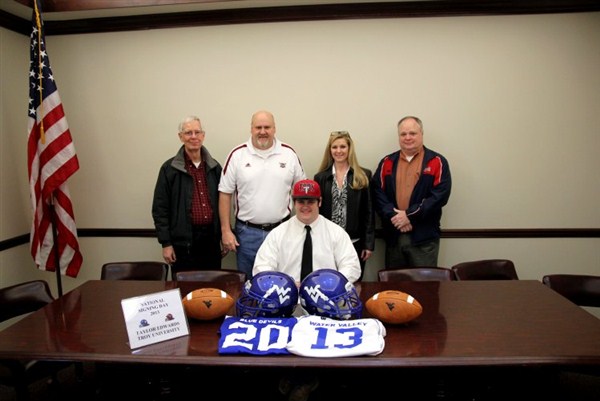 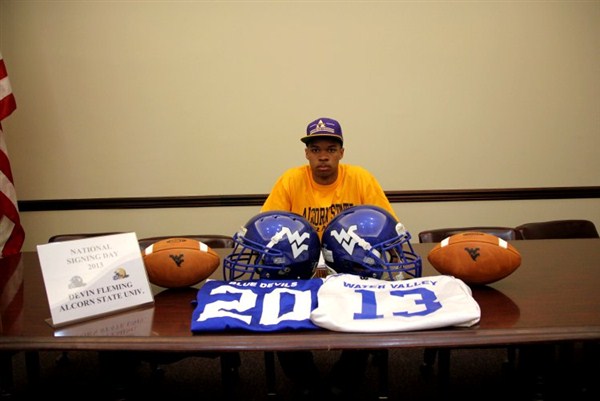 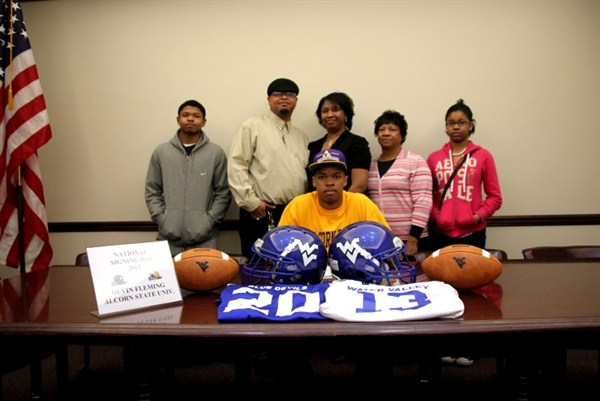 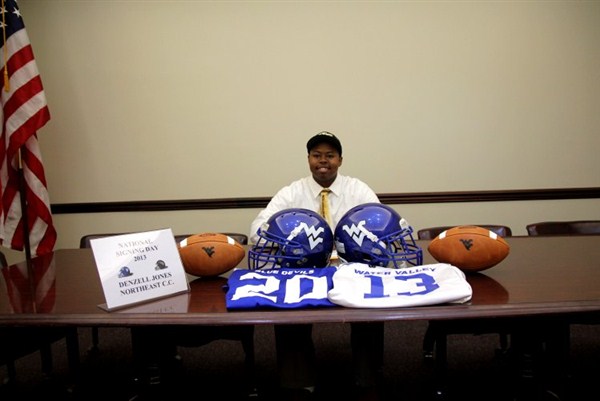 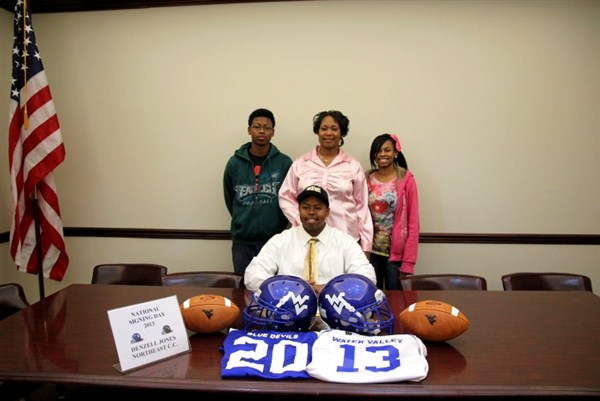 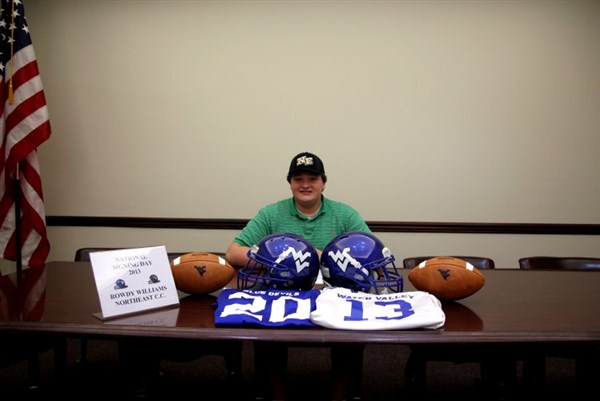 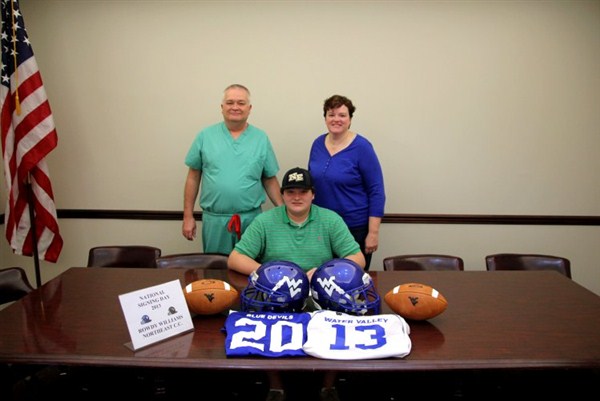 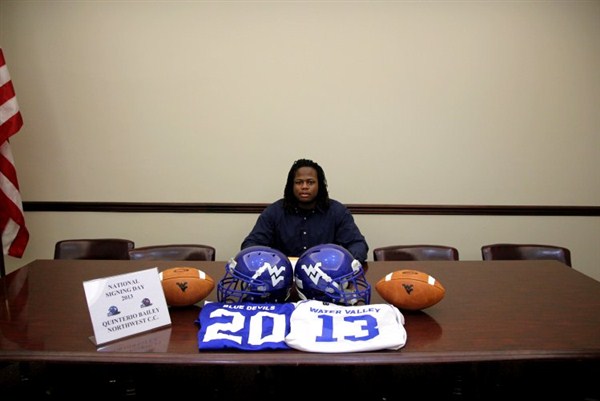 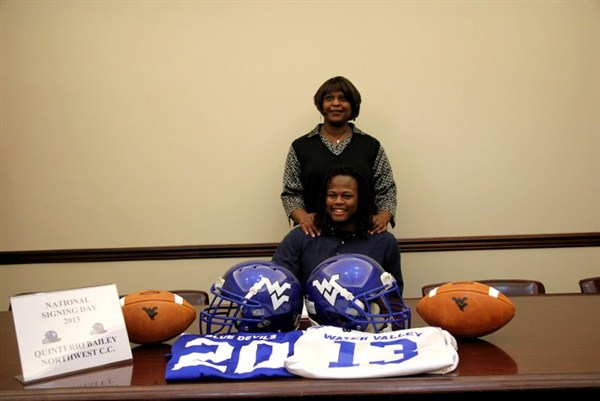 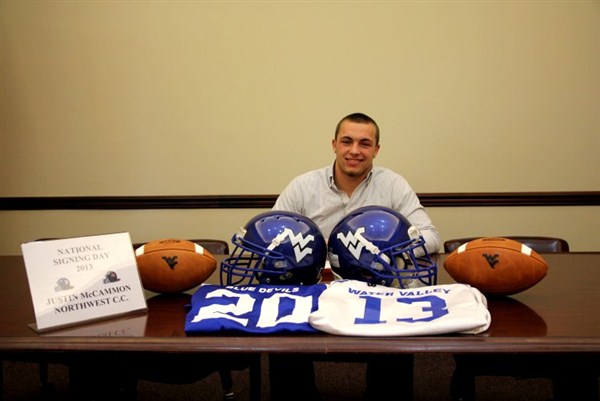 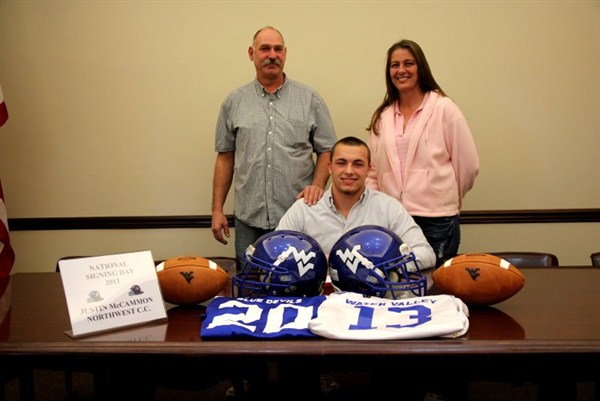 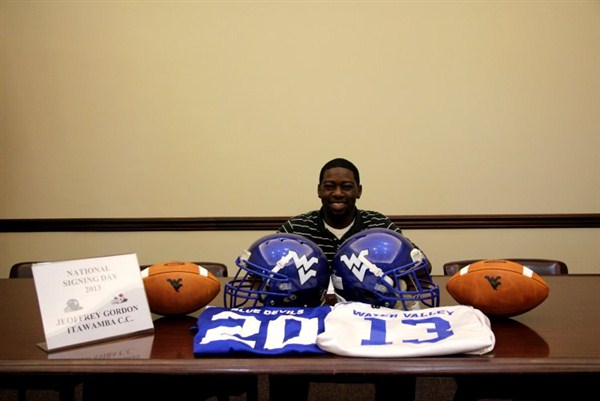 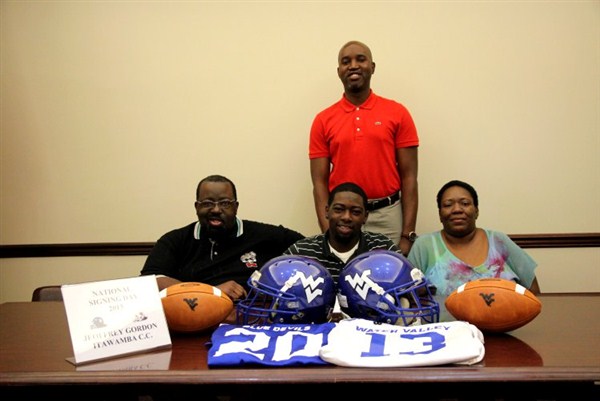 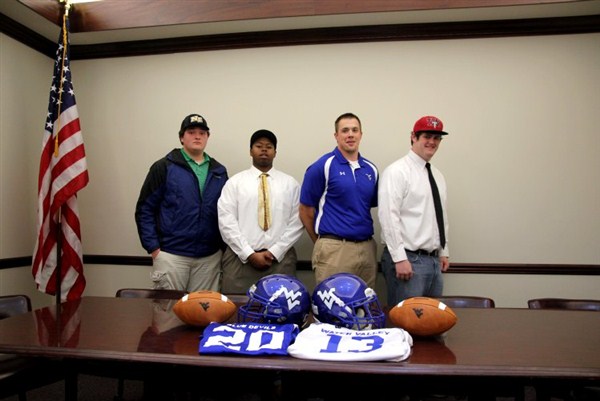 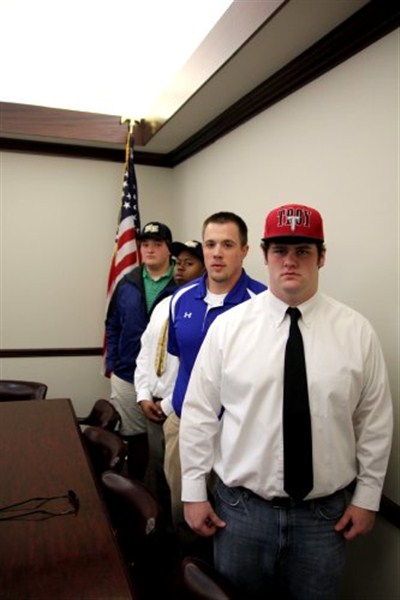 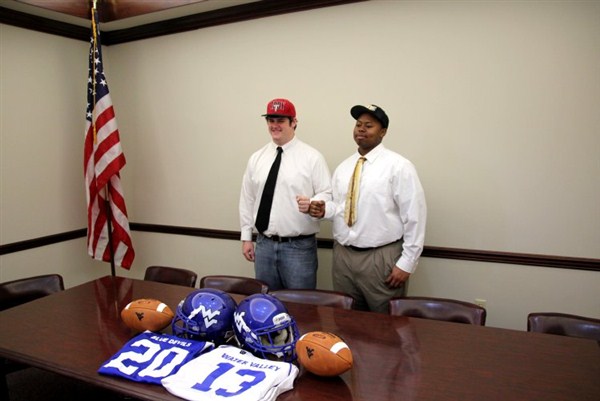 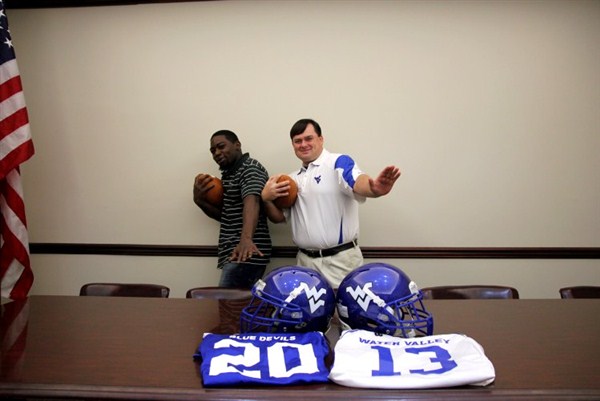 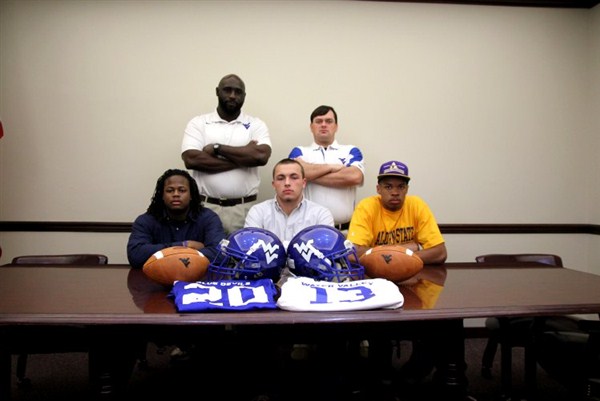 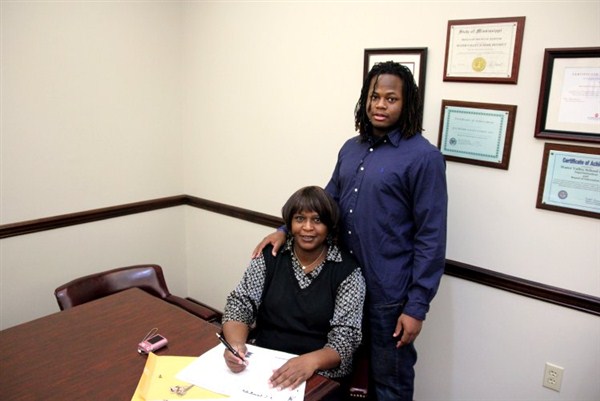 
WATER VALLEY – Wednesday, February 6, was a historic day for Water Valley High School and its football program. Seven Blue Devil football players signed National Letters of Intent (NLI) with two universities and three community colleges to further their education and playing careers.
Taylor Edwards (Troy University), Devin Fleming (Alcorn State University), Denzell Jones (Northeast Community College), Rowdy Williams (Northeast Community College), Quinterio Bailey (Northwest Community College), Justin McCammon (Northwest Community College), and Jeoffrey Gordon (Itawamba Community College) comprised what is believed to be the largest signing class in Blue Devil history.
This senior class won an outstanding 39 games in four seasons, earned a Region 2-3A Championship, three Region 2-3A Runners-Up finishes, and four playoff berths, will likely go down as one of the most successful classes in Blue Devil lore.         “These kids are all kids who turned into really good students and great kids,” reported Head Coach Brad Embry. “They’re leaders in the hallway and on the football field. Their parents have done a fine job raising them. I couldn’t be more proud of the men they have become. They will all represent Water Valley well.”
Three offensive linemen comprise the bulk of this signing class. Embry said of these linemen, “I am extremely proud of Taylor for sticking with his commitment to Troy when bigger schools became interested. When Taylor and his dad found a school they liked, they said when we’re committed, we’re committed,” Embry said.
“They never wavered from week to week or month to month. Taylor and Denzell can also be lumped together because about three years ago they decided they wanted to be football players and they have really out-worked everyone. When we get through with workouts in the afternoon, they refuse to leave and stay after to do extra on their own by running on the field or doing drills. Denzell signed a scholarship despite not playing the majority of his senior season. This is a testament to his character, work ethic, and technique. Rowdy is huge. That is the first thing that comes to mind. He just decided he wanted to play football recently and he’s a great kid. Junior colleges were ecstatic about him and his potential.”
Also included in this class are three of the self-proclaimed “Wrecking Crew Defense” members. Blue Devils Defensive Coordina-tor Coach Richard Russo reported, “I couldn’t be prouder of these three individuals as well as the entire signing class. By getting a college education these young men will have a very positive impact on their family tree for generations to come,” Russo added.
“Justin McCammon never missed one summer workout in the five years our staff has been here and was twice elected by the team as a Lifetime Captain,” the coach continued.
“McCammon has the highest motor of any defensive lineman I have ever been around and was incredible in pursuit. He really took what Coach Mix emphasized to heart. Q is our third linebacker to sign with a college in three years and that is something that is very special. His nose for the football was off the charts and that coupled with his physicality and speed make him a very dangerous linebacker for opposing offenses. Devin is very impressive as he is a rare physical safety that actually enjoys making tackles at or behind the line of scrimmage. If he continues to improve his ball skills and coverage skills the sky is the limit for his future at ASU.”
Rounding out the signing class is running back Jeoffrey Gordon. Embry said of Gordon, “Jeoffrey is a great competitor and he’s a guy I’m very proud of because of where he’s come over the last couple of years both as a football player and as a young man. He’s so competitive that he had to learn to channel and control his energy. He put the team in front of himself his senior year and played whatever role we asked of him despite various injuries and hurdles.”