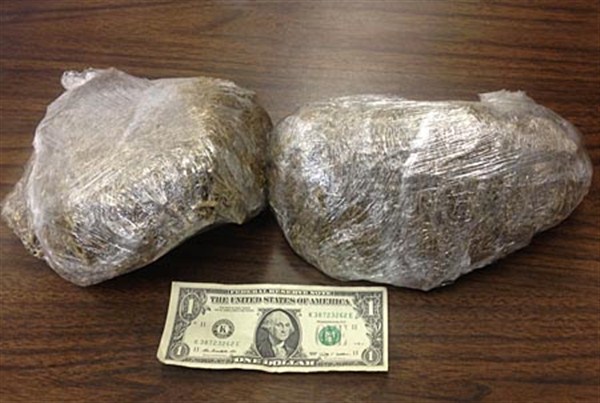 
COFFEEVILLE – One person was  arrested and several pounds of marijuana were seized Saturday following a six-week investigation into narcotics being shipped into the county.
Sheriff Lance Humphreys and deputies made the arrest Saturday around 3 p.m. on Okahoma Street in Coffeeville. The hispanic was arrested and charged with simple possession of marijuana, a charge that carries up to 30 years in prison and a million dollar fine.
Humphreys told the Herald a tip first alerted authorities to the possibility of the marijuana coming to multiple residences around Coffeeville back in December.
“We had a couple of informants tell us the narcotics were coming, but we didn’t have a suspect,” Humphreys explained.
Several weeks into the investigation authorities were able to determine that an immigrant farm worker from the Vardaman area was having the marijuana shipped to Yalobusha County.
Humphreys did not disclose the carrier that shipped the narcotics, but explained his department had inside help from the company throughout the investigation.
On Friday, the sheriff’s department learned that a shipment was expected to arrive at a residence on County Road 222 on Saturday.
Prior to Saturday’s afternoon delivery the carrier allowed deputies to bring a drug dog from the Calhoun County Sheriff’s Department to check the package.
“District Attorney John Champion okayed us to check the package without getting a search warrant,” Humphreys explained.
“The dog hit,” Humpheys said, and a plan was put into motion.
Humphreys obtained a search warrant for the residence on County Road 222 and waited for the package to be delivered as deputies staged several miles away.
However the plan hit a snag after no one was home when the carrier attempted to make the delivery.
Deputies remained ready for two hours and the carrier ultimately made two additional stops before successfully delivering the package.
Then the plan hit a second snag, as the suspect  immediately left the residence in a pickup with the package.
“We were going to wait 10 minutes and raid the house but that plan went to heck,” Humphreys said.
“We had two unmarked units in the vicinity who trailed the pickup to Okahoma Street in Coffeeville,” the sheriff explained.
Meanwhile the staged law enforcement officers quickly arrived and helped detain the suspect while a second search warrant was obtained for the home on Okahoma Street and the package.
Deputies did not find any contraband in the homes but the package contained alleged marijuana that weighed between two and five pounds, according to the sheriff.
The packages were sent from an address in south Texas.
Humphreys said the Mississippi Bureau of Narcotics assisted in the investigation. Coffeeville police also assisted after the suspect was stopped on Okahoma Street.
The suspect remains in jail and a bond hearing was scheduled at presstime.