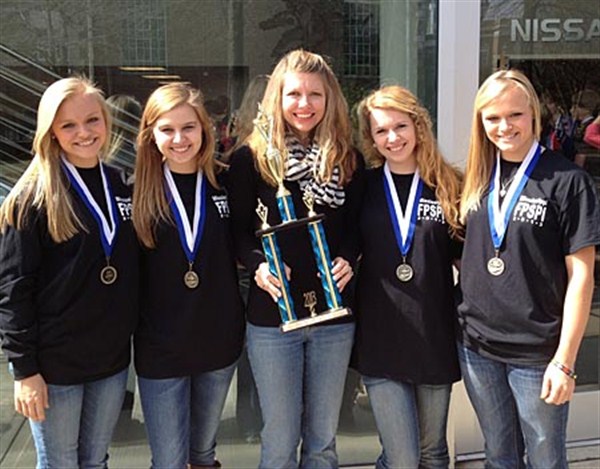 
WATER VALLEY – The WVHS Problem Solving Team won the state competition last week and will represent Mississippi at the National Competition in June at Indiana University.
Team members Callie Trusty, Anna Williamson Shade and Tyler Epes and sponsor Keli Lindsey were back at school Monday and already planning their attack on the Future Problem Solving Program Interna-tional Conference at Indiana University in Bloomington.
“I’m really excited to be a part of getting our school back in this competition,” said Lindsey, who competed at the state level when she was in school at WVHS. “When I saw it still existed, I wanted to participate. I enjoyed it so much when I was a student.”
The team won 2nd place in the Action Plan Presentation/Skit and then took first in the overall competition. Their problem was called “Ocean Soup” and revolved around the environmental issue of plastics in the world’s oceans.
Team member Tyler Epes won the t-shirt design contest and her fish-themed art was featured on all the programs as well as the t-shirts, according to Lindsey.
Although it has been a while since a team for WVHS has competed, the school has a winning history in the FPSPI on the state and international level.
Some of the winners have returned to teach at Water Valley including Angie Hodge, Tracey Varner, Shayla Burgess and Alana Harris.
In 2001, the team under coach Becky Terry won the top prize at the International Conference in Athens, Georgia for their HERO project that honored local war veterans.
Team members were Alana Reed, Lee Ann Holt, Tracie Mathis, Jill Terry, Lacey Harris, Melissa Smith, Ethan Bratton, Jessica West, Penelope Stokes, Tiffany Hille, Ashley Wilbourn, Shayla Burgess, Alita Wilson, Heather River, Megan Edwards, Andy Wright, Matt Weeks, Chris McCluskey, Carter White, Alan Cartwright, Justin Brewer and Dustin Welch.
The 2013 team now faces a new problem – money. It will take several thousand dollars to go to the International Conference this summer.
“I just hope people will support the team financially,” Lindsey said. “Our school winning the state title and going on to international competition is a really big deal.”