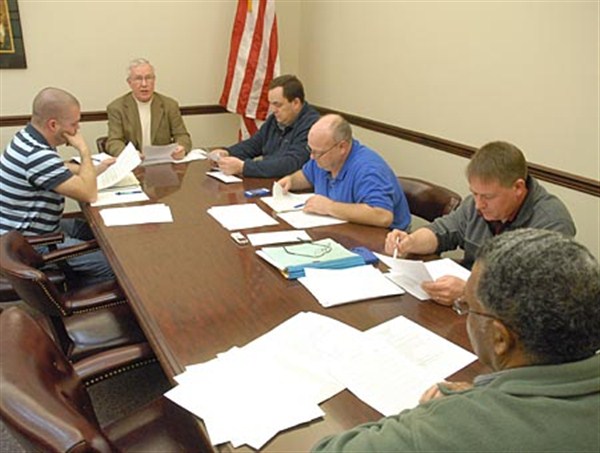 
WATER VALLEY – Two six-grade students who had a non-operating gun on the Davidson Elementary School campus will spend the remainder of the year in the alternative school program.
District school board trustees agreed Monday night to allow the students to attend the alternative school “with the stipulation that upon the first disciplinary infraction of any kind the student will be expelled for the remainder of the year,” Superintendent Kim Chrestman said Tuesday morning.
The initial recommendation from the DES disciplinary committee headed by Principal Chester Drewery was to expel the students for the remainder of the year. However, the school board modified that recommendation to allow the students to remain in school, Chrestman added.
The incident occurred Feb. 21 when a 14-year-old brought the non-operating handgun onto the DES campus and traded it to another six-grader for snacks. The father of the student who traded for the gun brought it back to school where Resource Officer Regis Mister seized it.
Officials emphasized that no students or staff members were in jeopardy and school policy was carefully followed during the incident.
Among other actions at the March 4 meeting, trustees:
• Approved the pilot program for performance based compensation for teachers and the MSTAR evaluation instrument.
• Approved a trip to the Memphis Zoo for the special needs students.
• Amended the dress code policy to not allow pick combs, a type of hair grooming accessory with long, widely-spaced teeth. In the 1970s, picks were sometimes worn in the hair as a fashion statement.
• Approved the extended school year and summer feeding program.
• Heard the superintendent’s report from Chrest-man, who said that DES students are celebrating the birthday of Dr. Seuss this week with a poster contest and visit from “The Cat in the Hat.”
That is one of just several events at DES this week, Chrestman told school board trustees at their regular first Monday meeting.
Among other activities, the Girls Scouts of America are presenting a free program for kindergarten through 2nd grade students on rocket science. “They will actually build and launch a rocket,” Chrestman said.
For the older students in the 3rd through 5th grades, the Girls Scouts are doing an archery program, he added.
Seventh grade students attended a baseball game at Ole Miss on Wednesday.  Students were invited to Ole Miss courtesy of the baseball program to participate in student day as the Rebels play their mid-week game, said Chrestman.
On Thursday Denzel Jones will represent Water Valley Schools and our region in the statewide Poetry Outloud competition in Jackson. “Best wishes to him as he participates in this prestigious event,” he said.
Ending the week will be a Positive Behavioral Inter-ventions and Supports program incentive featuring inflatable bouncers. “All students not going to the office last week and this week can pay 15 Davidson Dollars and jump in the Bouncee house, slides, etc. Each grade will have 45 minutes to do enjoy the activities in place of recess and activity time,” Chrestman explained.
The superintendent listed other goings on in the district, including a visit later this month from the “Rat Pack,” described as a fun-loving troupe that performs live and on stage with Terrance the Rat. The members are students from schools around the state who dance, sing and do skits helping spread the word about the harmful effects of tobacco.
Chrestman also congratulated several sets of winners from the district including the Problem Solving Team who won the state competition. “This is awesome for Water Valley,” he said. “It proves our students can be successful at the state level academically, not just athletically.”
The team will be representing Mississippi at the National Competition in June at Indiana University.  “It is estimated that it will cost at least $3,000 to cover the expenses of the national competition.  Any contributions would be greatly appreciated as the team tries to raise the funds necessary,” Chrestman noted.
He also thanked Marshall Allred and Keaton Burns for representing Water Valley at the Mississippi Scholastic Chess Championships.  He said the pair were among the students involved in the Chess Club sponsored by Sim Ramirez and Justin Thomas.
He continued the list of winners with the Junior High FFA Tool Identification Team, whose members were successful at the district level last week and now move on to regional competition. “We know they will do well in this contest,” he said.
The next regular meeting of the board will be March 25 due to the spring break holidays.