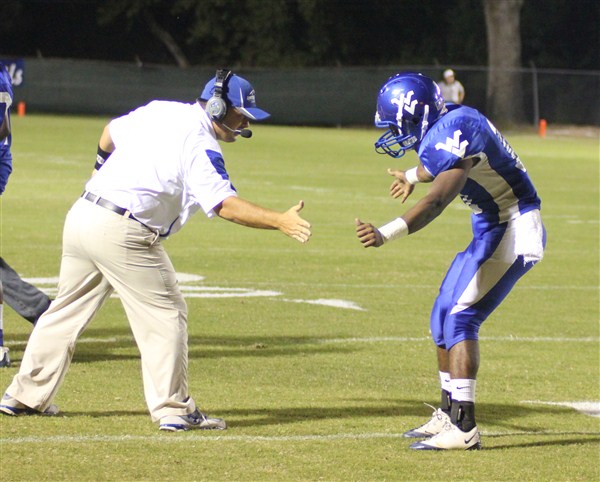 Former Water Valley Blue Devil Defensive Coordinator Coach Richard Russo has been tapped by the Independence High School Football Selection Committee as the Wildcats’ new head football coach. The Blue Devil Defense allowed a school record 39.7 points per game in 2007 prior to Russo’s arrival and improved to 23.0 in 2008 and have posted three consecutive seasons under 14.0 points per game in 2010, 2011, and 2012. Russo will be charged with taking over a program that has gone (0-22) during the past two seasons, have scored an enimic 164 points and allowed a robust 847 points.
To make this task even more daunting, the Wildcats will be in the new Division 2-3A with the Blue Devils, Charleston, and upstart North Panola. “Water Valley is a special, special place. The town, the parents, the school, the students, and the boosters love their Blue Devils and love their Football,” Russo said about his tenure at WVHS. “It is my wish that every coach gets to coach in a place like this at least once in their career. This was one of the hardest decisions I’ve ever had to make. I simply prayed that if God wants me at IHS he would open the door and if he didn’t, he would close the door. I’ve been at WVHS longer than at my own alma mater, so it was a very bitter-sweet decision!”
Russo added, “The direction of the school is amazing under the guidance of Coach Chrestman, Dr. Kitchens, Mr. Babb, and Coach Allman. This school is going to reach wonderful new heights both academically and athletically. Water Valley will roll on, as no one person is bigger than Blue Devil football. In fact, I can’t wait to see what all the Blue Devils accomplish in 2013, I think it’s going to be a fun ride. If I were a parent, I would be honored to have the likes of Coach Embry, Coach Mix, Coach Faust, Coach Lee, and Coach Thompson coaching my boy. This school and community is blessed because of them and their leadership of young men. If I may be indulged, I would like to thank each and every player that I had the fortune to coach in the blue and white. It has been a fun ride and I truly believe we left the defensive reputation of WVHS Footbal better than when we found it. I thank Coach Embry so much for the opportunity.”