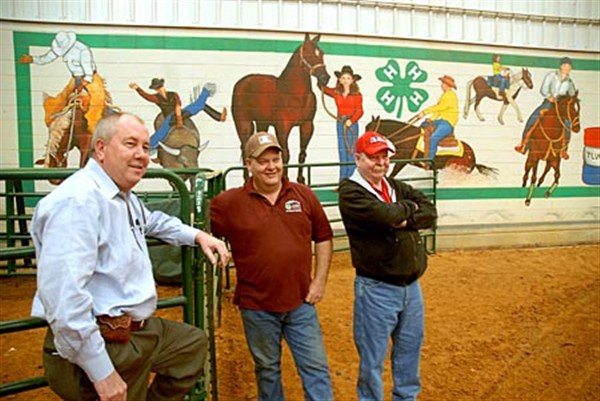 
COFFEEVILLE – Some of the best-known bull riders in the world will tangle with some of the meanest bulls during the Bulls and Barrels Bonanza in the arena of the Yalobusha Multipurpose Building April 6.
The event is a fundraiser for the Rotary Club of Water Valley and will include barrel racing with 20 of the best riders around. “It’s going to be a premier event,” said Rotarian Brent Gray, one of the event coordinators.
“We’re going to have 35 bull riders and we’re going to have a long go and a short go,” Gray said. “The top ten riders from the long go will ride in the short go for the prize money.”
Among the bull riders are nationally ranked Brent Menz of Missouri and former PBR world finalist Willis Trosclair of Louisiana. But, they aren’t the only famous names to kick up some dust. Bulls with monikers like Widow Maker, Undertaker, and Dozer will be there to toss cowboys around. Some have participated in the national finals rodeo in Las Vegas.
The main barrel race will be held in between the bull riding events, according to Gray. But, the racing will begin at noon and is open to the public.
There will also be a game of bull poker between the barrel racing and the short go finale. Gray described the event as a card table sitting in the middle of the arena with four guys sitting around it. “Then you turn a bull out,” he said.
The rodeo clowns do their best to make the bull angry and lead it to the table. “Last man sitting in a chair wins the jackpot,” said Gray. “We will be looking for contestants out of the crowd.”
Announcer for the rodeo is nationally recognized Jeff Lee and funnyman is Chad Farley, who has held the funnyman of the year title.
The show starts at 7 p.m., but organizers recommend  coming early to get a good seat. Tickets are $10 for adults, $5 for kids four to 12 and admission is free for youngsters three and under.
There is plenty of parking and the multipurpose building is easy to find on Hwy. 7 at Coffeeville, about 11 miles north of the Coffeeville exit on I-55 and about 9 miles south of Water Valley. There will be concessions available.
Main sponsors of the event are the Rotary Club of Water Valley and Kirk Auto Company. Additional sponsors include Wade Equip-ment and Mississippi Land Bank.
The Bonanza will help the Rotary Club of Water Valley provide support for their many projects such as providing dictionaries for third grade youngsters and sponsorship of student attendance to the Rotary Youth Leadership Conference, among others.