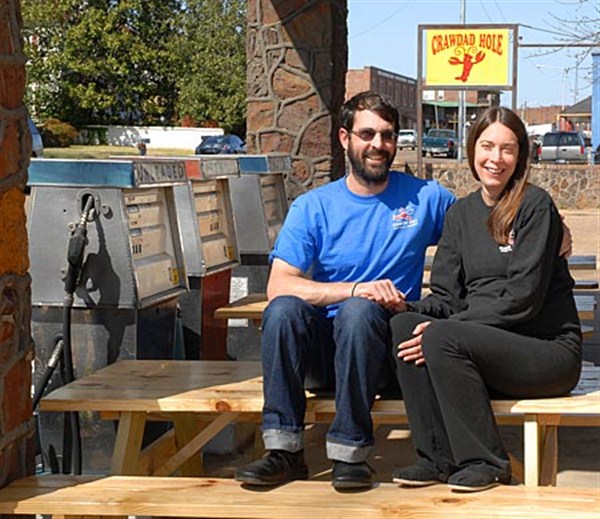 Justin and Alexis Showah pose under the happy crayfish at their business, Crawdad Hole, on South Main Street. – Photo by Jack Gurner


WATER VALLEY – The Crawdad Hole is celebrating its second anniversary with picnic tables by the gas pumps and a new hand-painted sign.
The sign, painted by local artist and sign painter Bill Warren, features a crayfish with a bubbly personality. And, the tables provide a touch of whimsy for diners who like the great outdoors.
Alexis and Justin Showah purchased the old Jenkins Service Center at 129 South Main Street at the end of 2010. The couple began boiling and serving crawfish out of the former gas station at the end of March 2011.
They began preparing the crawdads outside with only a single aluminum pot, no electricity, and a passion for bringing authentic Cajun crawfish to Water Valley, said Justin.
The operation began as a carryout only operation, but it quickly evolved to include a dining area outside and other menu items such as boiled shrimp, crab legs, corn, taters, Cajun sausage, and boiled peanuts.
Justin Showah grew up working at his father’s Jackson restaurant, which is also called Crawdad Hole. Alexis Showah worked as a server and manager at Ajax Diner in Oxford before spearheading the idea of opening a seafood restaurant here with her husband.
The goal of the Crawdad Hole is to provide great Cajun style food in a laid back, family atmosphere with a “come as you are” approach, according to the couple.
The eatery features seasonal menus such as the summer menu with New Orleans style shaved ice and barbecue shrimp po-boys and the fall menu with homemade seafood gumbo and fresh oysters. The restaurant also offers live crawfish for sale by the sack during the spring.
The Crawdad Hole opens for dinner service from 3 p.m. until 9 p.m. on Thursday and Friday and from noon until 9 p.m. on Saturdays. Sunday hours are 3 p.m. until all of the food is gone. The restaurant can provide catering for large events.
The restaurant has a Facebook page at Crawdad Hole Water Valley, and you do not need to be on Facebook to access the information on the page.
Future plans for the Crawdad Hole include an outdoor deck in the back of the building and a renovation of the garage on the property’s south end into a gathering room for 40-50 patrons.
For any questions, call Alexis or Justin at (662) 816-4006.