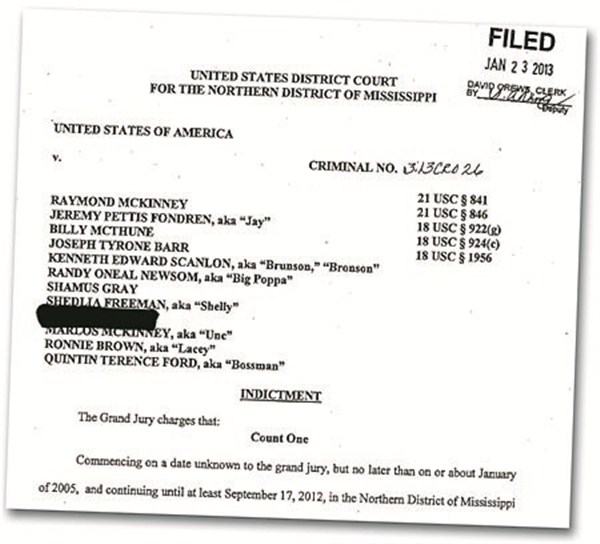 
OXFORD – Eleven people including two from Water Valley have been charged in a multi-count drug indictment.
Kenneth Edward Scanlon, Shedlia “Shelley” Freeman  , both of Water Valley were among the people indicted on January 23. The case was made public on April 2, and the indictment alleges the pair were involved in illegal activity from 2006 through September, 2012. Local sources report both men’s houses were raided by the FBI last September.
A federal grand jury claims they conspired to distribute and possess powder cocaine and marijuana. Other charges include money laundering and unlawful possession of firearms.
Both men made an initial appearance Tuesday in front of  Judge S. Allan Alexander. Scanlon was released on a $10,000 bond and Freeman on a $5,000 bond on April 2.
Others indicted include Raymond McKinney, Jeremy Pettis Fondren, Billy McThune, Joseph Tyrone Barr, Randy Oneal Newsom, Shamus Gray, Marlos McKinney, Ronnie Brown and Quintin Terence Ford.
Another name is blacked out, and the document numbering begins with 42 instead of the usual 1, which indicates other activity in the case is sealed, according to a story in the Northeast Mississippi Journal.
Scanlon faces a 10-count indictment which includes one count of conspiracy to distribute marijuana; four counts of violent crime/drugs/machine gun; and five counts of unlawful transport of firearms, etc. The weapons charge stem from Scanlon’s possession of seven firearms for the furtherance of the alleged crime. Scanlon is a previous convicted felon.
Freeman and Raymond McKinney each face one count of conspiracy to distribute marijuana and three counts of money laundering-interstate commence.
In the 12-page indictment, Raymond McKinnney, Fondren and Freeman are alleged to be involved in illegal gambling on sporting events with proceeds from drug transactions. McKinney would send out lines on the sporting events and betters would place bets with either McKinney or Freeman.
A Wells Fargo bank account was used for the proceeds of the illegal gambling operation and narcotics operations, according to the indictment.