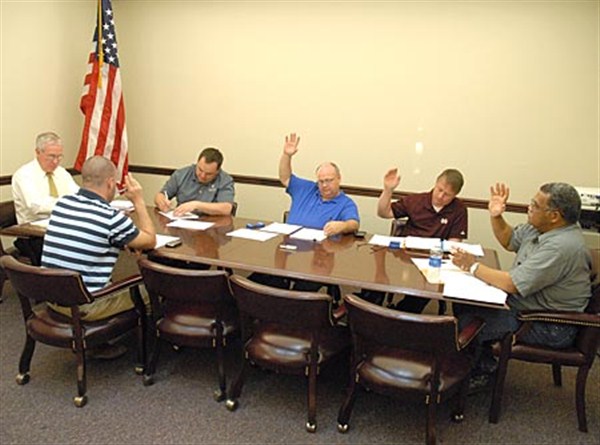 School board trustees vote during the regular “first Monday” meeting this week at the district office boardroom. Superintendent Kim Chrestman is on the far left and board members are Chris Terry, Casey Washington, Taylor Trusty, Pierce Epes and Lamar Burgess. – Photo by Jack Gurner


WATER VALLEY – Keeping up with 500-plus students is a difficult, daily task at the high school. But, it can become even more difficult when special events – such as prom – are scheduled for later in the day.
And, the level of difficulty increases even more when you throw in a fire drill at the same time.
That was the case two weeks ago on a Thursday when a “head count” team sent by the State Department of Education arrived unannounced around 1:30 p.m. to perform a student census at WVHS.
Principal Glenn Kitchens said that when the team arrived, one asked what was going on. “The buzzer was buzzing and the building was being emptied,” Kitchens said with a grin. “I told him, ‘well, we’re having a fire drill.’”
Superintendent Kim Chrestman explained to school board trustees Monday night that Dr. Kitchens had to show that every student is in their assigned classroom or signed out. “We’ve got to verify where every kid is,” he added.
Chrestman continued that a large number of seniors had signed out to prepare for prom, others were signed out to go to work, and still others were in the alternative program or on in-school suspension or on a field trip.
“It was scary there for a while, but he (Kitchens) keeps up with everybody and documented where everybody was,” the superintendent said. “We accounted for every student down to the last student.”
Among other actions at the “first Monday” school board meeting, trustees:
• Accepted the low bid from Tri-Star Mechanical Contractors for a hot water heater.
• Approved a public notice for school officials to apply for a $210,000 rural development grant to help purchase air conditioning equipment.
• Accepted the revision of the Water Valley School District Instructional Management Plan.
• Heard the superintendent’s report from Superintendent Kim Chrest-man.
Among the items covered were kindergarten and early registration at Davidson Elementary School, which is going on this week. Chrestman explained that parents would need the following documents in order to complete the registration process:
• certified birth certificate (you may bring a copy)
• Mississippi original certificate of compliance (immunization)
•  Social Security card
• Two proofs of residence (must be in parents name)
• Complete nurse and bus registration forms
• Go to www.wvsd. k12.ms.us to download some of these forms.  Make sure the forms are school specific (DES or WVHS).
“For all other grades you must provide two proofs of residence and complete all registration forms,” the superintendent said and added that the forms are available for download on the school’s website at www.wvsd.k12.ms.us.
According to Chrestman, early registration is also taking place this week at the high school offering families the opportunity to complete this task and not have to work that into their summer calendar.  School will begin for students on Aug. 7 with open house on Aug. 6.  “If Early Registration is complete families will have no obligations at the school until open house or the first day of school.”
The superintendent also noted that Academic Awards Day will be Friday, April 19, beginning at 8:15 in the high school gymnasium.
The complete text of the superintendent’s report is included with this story on the Herald’s website.
• Heard Dr. Kitchens pay tribute to the late Stanley Crow, long-time Water Valley School Band Director noting that Crow’s service to the community continued with his work with the Community Band.
“He was a fine man who spent his career devoted to this community. He is going to be missed,” he added.
Crow passed away Mon-day after a battle with cancer.
The next Water Valley School Board meeting will be April 22 beginning at 6:30 p.m. in the Water Valley central office boardroom.