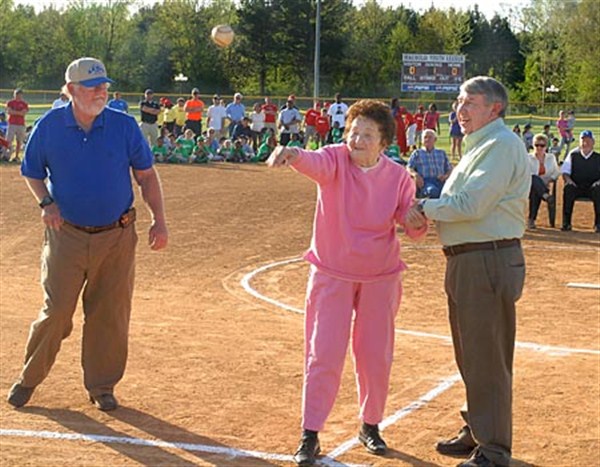 Mrs. Frances Stewart, wife of the late L. C. Stewart, throws out the first ball during opening ceremonies for the Magnolia Youth League Monday. Her son, Jimmy Stewart (right) and Tommy Edwards of the league assist. – Photos by Jack Gurner 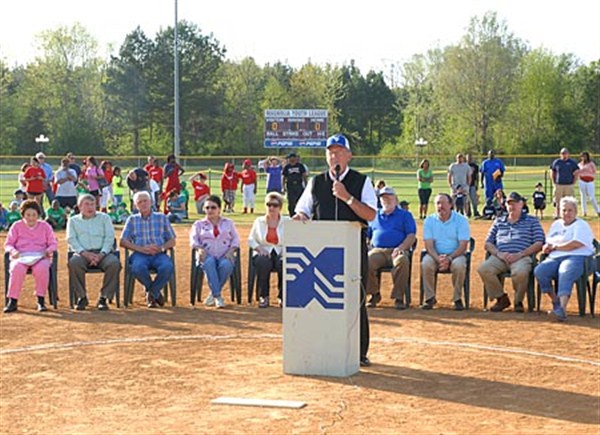 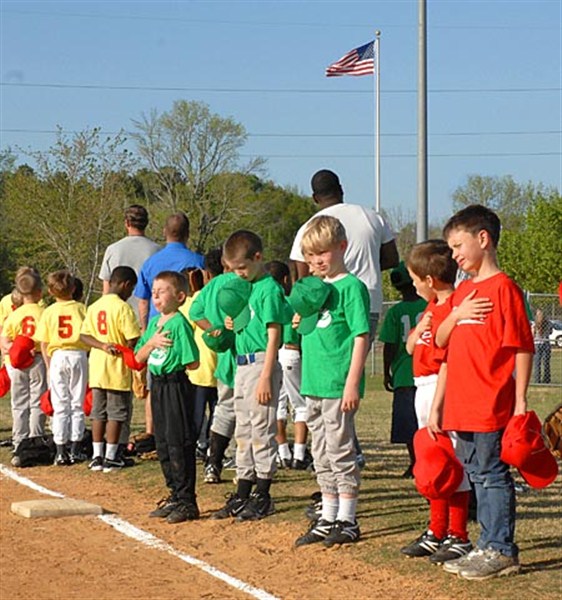 The bright afternoon sun made it uncomfortable for these Magnolia Youth League players who were standing at attention for the National Anthem being sung by Water Valley’s First Lady Betty Hart.


WATER VALLEY – Youth baseball opened for its 50th season Monday by honoring the Magnolia Youth Baseball Association’s first commissioner, the late L. C. Stewart.
Stewart’s wife, Frances Stewart, threw the first pitch of the season using the same ball that opened the very first season in 1963. She was accompanied by her son, Jimmy Stewart, who played first base on one of the 1963 teams.
Darnell Vaughn of the Magnolia Youth League Baseball/Softball program introduced Mrs. Stewart and said that Mr. Steward and many other men and women “cut trees, cleared, plowed, and sodded in order to form this league.”
She noted that in the early days the association consisted of six county teams:  three from Water Valley, two from Oakland and one from Coffeeville. Additionally, teams from Calhoun City, Grenada, Montgomery and Tallahatchie Counties were part of the association. “More than 100 games were scheduled for that year,” Vaughn added.
Stewart, who also served as mayor of Water Valley, was credited with helping start a number of innovative youth programs in the city. He was also a pioneer in economic development.
Earlier, Rev. Fred E. Moorman of the Gatewood Church of God opened the ceremonies with a prayer. He was followed by Mayor Larry Hart who welcomed those attending. “I believe we have one of the best sports complexes in North Mississippi,” he said.
Following the mayor, Betty Hart sang the National Anthem and Tommy Edwards read a list of teams and their coaches.
Mayor Hart also asked for a moment of silence to honor the recent passing of one of the programs staunchest supporters. “This is the first opening day that we have come here without Dr. Joe Walker,” the mayor said.
“Please bow your head for a few moments of remembrance of Dr. Joe and his family and all he did for our program and our city.”