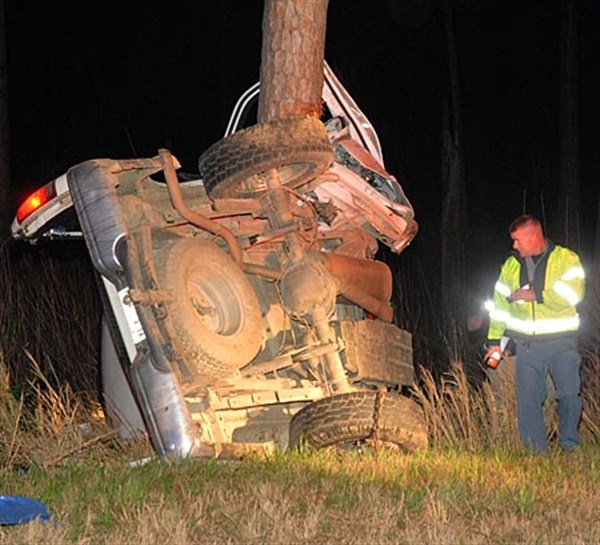 A Mississippi Highway Safety Patrol Trooper marks the scene of a one-vehicle crash that took the life of Justin Williamson, 29. – Photo by Jack Gurner


WATER VALLEY – Three Yalobushians died within a two-hour period Friday night, beginning at around 8:30 p.m. when emergency medical responders were called to the PizzaGetti restaurant on Main Street.
Owner Billy Rotenberry, 70, had fallen ill and was transported to Baptist Memorial Hospital in Oxford but did not survive. He had operated restaurants in Texas and Water Valley for much of life and loved serving people.
“He left this life doing what he loved most—cooking and serving good food, surrounded by the people he loved the most, his family,” according to information in his obituary.
About two hours later, EMRs were sent to a home on County Road 82 where Neal Bennett, Jr. died as a result of an accident at the residence. Bennett was 22.
Minutes later, EMRs were called to a one-vehicle crash on Hwy. 7, about a mile-and-a-half from the Grenada County line where Justin Williamson, 29, was killed.
“It was a very tragic night,” Yalobusha Sheriff Lance Humphreys reported about the weekend.
Humphreys said Bennett had been working on the drive shaft of an automobile that apparently rolled over him. The vehicle was up on ramps when the drive-shaft came loose, and the emergency brake did not hold the vehicle.
Humphreys said reports indicate that Williamson was friends with Bennett and may have been responding to a phone call about the accident when his vehicle left the road and struck a tree.
Coroner Ronnie Stark told the Herald both men were pronounced dead at the scenes. He cited blunt force trauma as the cause of both death.
Humphreys said deputies also responded to a head-on collision at the Panola-Yalobusha County line after a male driver was struck by an 18-wheeler after driving south on the northbound lane on I-55.
“All of these calls were going on simultaneously,” Humphreys reported.
Humphreys said the I-55 accident occurred just inside Panola County, but Yalobusha deputies assisted the Panola County Sheriff’s Department and Mississippi Highway Patrol.
The driver of the vehicle had entered the exit at the Pope/Courtland exit and traveled several miles before the accident. He was airlifted to the Regional Medical Center in Memphis in critical condition.