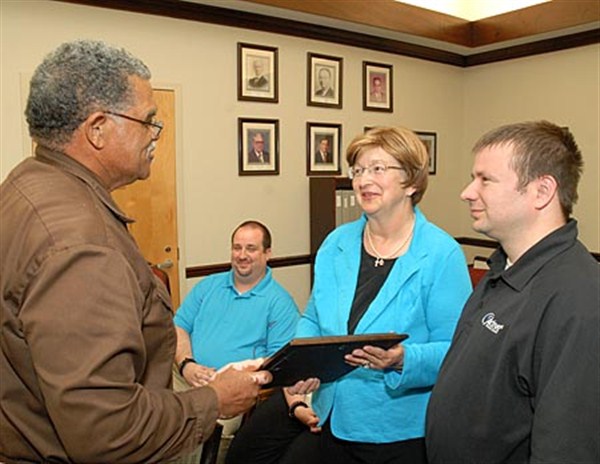 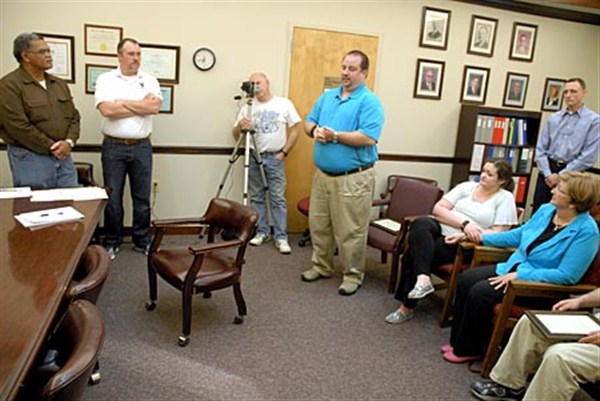 
WATER VALLEY – The Band Hall at WVHS has been renamed in honor of the late Stanley Crow, longtime Director of Bands for the local schools.
The resolution renaming the hall was passed Monday night at a recessed meeting of the Water Valley District School Board.
Board President Lamar Burgess read from the resolution stating in part that Crow spent his career directing the Water Valley Band from 1969 until 1997 and under his leadership the band received numerous superior ratings and awards.
“Mr. Crow exhibited an incredible level of patience with his students,” Burgess said, drawing smiles from the board members.
Burgess went on to list some of Crow’s achievements including his term as president of I-55 Band Association and Northeast Mississippi Band Directors Association. He also served as coordinator between the Lions Club and the Mississippi Lions All-State Band as well as music director for the Water Valley Community Band.
He was also part of the First Baptist Church Hand Bell Choir and a charter member of the Oxford Community Band, the resolution stated.
Burgess continued that in honor of his leadership and years of service at Water Valley High School, the Board of Trustees of the Water Valley School District hereby renames the band hall the Stanley Crow Memorial Music Hall.
Burgess presented a copy of the resolution to Crow’s wife, Becky, and son, Michael. “I just want to say ‘thank you,’ we love you and we are sorry for not only your loss, but for the community and the state’s loss,” Burgess said.
Becky Crow responded that the timing for the resolution was handled well. “If you had tried to do it any sooner, he would have said, ‘Oh, no. Absolutely not.’ He would also say that at Water Valley we just had great students. And, I can say kids because they became our kids when we had them eight years in a row.”
Superintendent Kim Chrestman noted that the board recognized that the achievements were a family affair. “We know your part and we recognize you for it and your family. I know the resolution goes to him, but we all recognize that it is a partnership.”
Between them, Stanley and Becky Crow served 48 years in the Water Valley Band program.