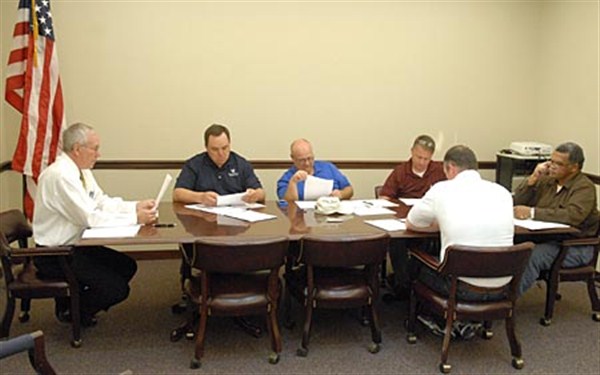 
WATER VALLEY – A collaboration with parents and the community is required for local schools to overcome impediments to learning and become successful.
“Too often the entire burden of success or failure is placed on the schools,” said Water Valley District Superintendent Kim Chrest-man during an interview with the Herald last week. Chrestman recently attended an education seminar that delved into learning impediments like those facing the local district.
Chrestman said that strong support is needed from the community to help educate children in poverty who represent more than 70 percent of the student body in the Water Valley District. And, to a lesser extend, the school system has to deal with ELL students (English language learners who are becoming more prevalent in modern day classrooms).
“We’re expected to take these kids and they will learn, they will succeed, they will graduate and everything will be alright,” he said. “But, there is a definite difference between the skill levels of different students.”
Chrestman explained some of the basic impediments to learning faced by students including:
• Behavior – Chrestman said that there is a lot of difference between the behavior of students especially among those from different socio-economic backgrounds.
• Constant moving – According to the superintendent there are 7th and 8th grade students in our district who have been in a half-dozen or more schools.
• Bullying – There are more complaints of physical, verbal and sexual harassment than ever before, Chrestman noted.
• Culture – There are so many different cultural differences now. “It’s not that any one is right or any one is wrong, they’re just different and they are going to clash,” he said.
• Social skills – Some students lack the ability to interact and get along with others. “They don’t have the social skills to manage conflict,” Chrestman said. “The only way they know how to handle it is physically with violence.”
But, the superintendent continued, even with these issues, the schools are expected to teach and the students are expected to learn.
“You have a lot of families who have a lot of positive experiences at school. My children did. A lot of people do. But, not everybody’s experience is that way,” he added. “We’ve got students with health issues. We’ve had students in car wrecks who have had operations. We’ve got some with disabilities. We’ve got students with mental problems.”
“We can’t provide a complete package to meet everyone’s needs, but sometimes we’re expected to,” said Chrestman. “There are just so many barriers we face.”
“We want to do our part,” he emphasized. “We are responsible for so many things. We can influence so many things. We can overcome so many things. But, it’s tough. We’ve really got a long way to go before we can have the success we want with these kids.”
“But, we are going to push,” Chrestman commented on the improvement steps being taken by the district. “We’re going to put in as many interventions as we can afford.”
This year the district hired Interventionist Patricia Treloar to work at Davidson Elementary School. While one of her main tasks is helping students improve their reading skills, she is also doing interventions on such diverse things as how to sit still in class, how to look at the teacher and tell the truth, how to go to the restroom without stopping to play and how to simply walk down the hall in an orderly manner.
“But,” added Chrestman, “some of these barriers to learning only a parent and only the community can help overcome.”


Jalen Southern was nominated by his teacher, Mrs. Burns, for the 2013 Junior National Young Leaders Conference based upon his academic achievements and leadership potential.  Jalen has been invited to be a part of this conference in Washington D.C.  Water Valley School District would like to share Jalen’s achievements and to congratulate the parents.

The “Traveling Trunk” from Ole Miss visited 2, 3, 4, 5, grades to make a presentation on “low-country” basket weaving. Students learned the history and origin of the craft and even got to begin weaving their own basket.

The 2nd grade took a field trip to Cedar Hills Farm in Hernando.  The students were able to learn facts about animals, pet animals, plant seedlings, pick strawberries, ride a train, play, and have a picnic lunch.  Everyone enjoyed a great day!

The Water Valley fire truck recently visited Kindergarten, 1st, and 2nd grades. Children were taught what to do in emergency situations and explored an ambulance.

WVHS students Garrett King and Callie Trusty attended the Rotary Youth Leadership Conference earlier in the semester.  These two students were guest speakers last Tuesday for the local Rotary Club Luncheon at Regions Bank.  Both students did an excellent job sharing with the Rotary Club members and guests about their experience at the leadership conference.  They represented themselves, their families, our school, Rotary and the Water Valley Community very well.  Thanks to the Water Valley Rotary Club for sponsoring WVHS students to attend this annual event for developing leadership skills.

The WVHS Track Team won the Division Championship at Tishomingo County High School last week besting all other teams in the division and moving forward to regional events this coming Saturday in Oxford.  North Half will be in Winona the following week before the State Track Meet follows near the end of the semester.  First place finishers at the meet were Justin McCammon-Shot Put Champion; E.J. Bounds-Triple Jump Champion, Jarard Williams-Long Jump Champion, K.J. Lee – 110 and 300 Meter Champion, Deon Hilliard-200 Meter Champion, Mark Gooch, Jeofrey Gordon, Cortaveous Hawkins, and Deon Hilliard-4X200 Meter Relay Champion and Devonte Towns, D.J. Spearman, Javonta Jackson and Brandon Smith-4X400 Meter Relay Champion.  These wins coupled with strong finishes in several other events netted 124 points and a Division 2-3A Championship.  Congratulations to all team members and Coaches Bryant Mix and Richard Russo for this outstanding achievement.  The WV Track Team will be in Oxford on Saturday for the next round in competition.

The high school band traveled to Gatlinburg, TN last Thursday-Saturday to compete in the Smoky Mountain Music Festival.  To my knowledge this was the first trip that the band program has been on since Stanley Crow retired, and the first contest that the band has performed in since 2009.  As for the performance at the festival, it went great.  The band scored an overall 2(excellent).  The standards to get a 2 or a 1 are higher at this festival than most other festivals.  We are proud, but it doesn’t stop there.  We were awarded two Certificates of Excellence: 1) Kala Reynolds for her trumpet solo 2) Percussion Section for their overall performance.  To top it off, the band was awarded first place in their class.  We are very proud of the way they represented Water Valley and Mississippi.

As for the trip, could not have asked the students to be any better than they were.  They were well behaved, always on time and represented our band,

WVHS athletes will receive physicals tomorrow, April 23, on campus.  Thanks to Yalobusha General Hospital and Administrator Terry Varner for providing this service to our student athletes and our school athletic program.

Congratulations to the Softball Team and Coach Clouse for a great season.  They completed their season this weekend in the first round of the state playoffs losing to Booneville.  Good season – thanks to everyone.

Water Valley Baseball team will begin first round playoffs this Friday evening at Belmont.  Belmont will travel here on Saturday for game 2 and, if necessary, game 3. Times are TBA.

The WV Chamber of Commerce will hold their annual banquet in the multi-purpose building this Thursday evening April 25th.  Many community members will be in attendance and we are always happy to have the community on the campus for events such as this one.

Friday evening is our community’s Annual Relay for Life event.  WVHS will have a team along with several other groups in the community.  It is not too late to make your contribution to the fight against cancer and to help the WVHS Blue Devils top the Coffeeville Pirates in a friendly fundraising competition between our two neighborhood schools.

The WVHS Drama Club will have their spring production, Class Action, on Thursday and Friday, May 2 and 3 at the Civic Auditorium.  Thanks to Mr. Ramirez, Ms. Murchison and Ms. Koshenina for sponsoring the club this year and everyone is invited to come out and enjoy the show.

Spring Football Game is May 2 at 6:00 pm at Water Valley.  Please come out and support our Blue Devils!!

Before the school board meets again we will be well into the testing season.  Thanks to our teachers and our student body for their work this year in the classroom.  They have worked hard and it is very much appreciated by the entire Water Valley School Community.