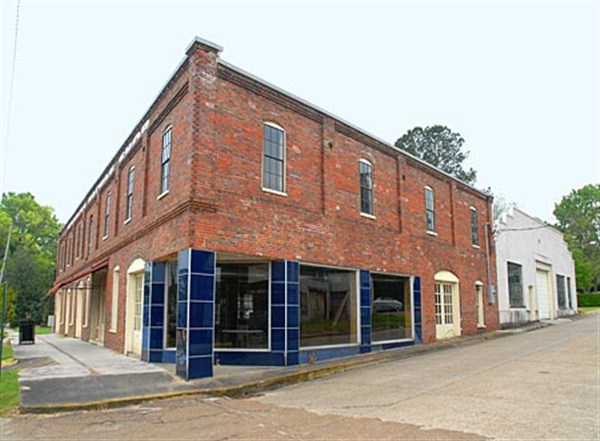 The Hendricks building on Main Street in Water Valley was cited a contributing factor in the decision for business partners Andrew O’Bryan and Dr. Mac Nichols selection for the destination of the craft brewery. – Photos by Jack Gurner 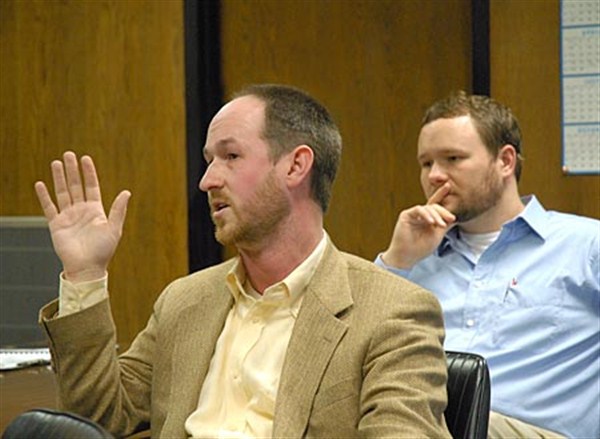 
WATER VALLEY – The historic Hendricks building will soon become home to the first craft brewery in north Mississippi.
The brewery will be only the fourth in the state and will represent nearly a million dollar investment in downtown.
Business partners Andrew O’Bryan of Tula and Dr. Mac Nichols of Oxford appeared before the Planning Commission last week initially seeking a zoning variance that would make the project possible. However, central business district zoning doesn’t prohibit light manufacturing, according to commissioners. So, no action was needed.
O’Bryan said that the brewery would create 10 to 15 jobs in the first year. “We can dream after that. We would hire locally,” he added. “We want to use as many local assets as possible.”
Commissioners did question aspects of the operation including emissions and parking. O’Bryan answered that craft breweries are quiet businesses and that wastewater discharge is heavily regulated by both the state and federal governments.
“There are no emissions other than when you cook,” he continued. “During the very first part of the sequence it smells like a bakery.”
After meeting with the planning commission, O’Bryan told the Herald: “We’re done. We’re already in our licensing phase. We’ve already passed our inspections. We’ve got our zoning approval. The money is in place. All the hurdles that keep people from operating, we’ve passed them.”
“We’re in the ‘hurry up and wait’ stage where we’re just waiting for our equipment to be fabricated,” he added.
What makes craft brewing legal in Mississippi was legislation passed last year and signed by Gov. Phil Bryant that raised the alcohol by weight in beer from five percent to eight percent. The law, which allows a greater selection of imported and craft beers, was supported by the state’s tourism and restaurant sectors.
“We would not be in Water Valley if that law had not happened,” said O’Bryan. “And, we wouldn’t be in Water Valley if the beer law hadn’t passed.”
“We want to be good citizens of Water Valley. We do our banking here. That’s why we are doing everything we can up and down the street,” he continued. “We’ve hired a local graphic artist instead of hiring someone from New York or some ad agency.”
The Hendricks building in Water Valley beat out Oxford and a site on Highway 6 in Panola County, O’Bryan said.  “When we met Bill McGregor and we found out that building was available, we stopped the whole process and completely changed our entire business plan to fit Water Valley.”
“We have a built-in story with that building. We have a built-in story being a part of the resurgence of business in Water Valley,” he said. “I give Amos (Harvey) full credit for opening our eyes to this. We were really set on Oxford before we met Amos. He invited us down and we saw what was going on here with the BTC, with the different art galleries, with the other businesses started by people in our age group, it really opened our eyes.”
Harvey, a tour manager and producer in the music industry, once worked in the craft brewery business and will handle the day-to-day operations of the brewery.
Another aspect of Water Valley that impressed O’Bryan and Nichols was the helpfulness of the town’s people. “Everybody we talked to was very positive,” said O’Bryan. “We saw an environment that was fertile for us as young people to come in and make an investment in the town.”
He also praised Mayor Larry Hart for his help. “He was very receptive. He did his due diligence in finding out about our industry, about our backgrounds, our track record in business.”
Mayor Hart told the Herald that the business compliments what is already out there on Main Street. “There is uniqueness about it. Hopefully folks will come in and check it out and eat at the BTC or the Crawdad (Hole) and come over to Casey Jones (Museum).”
Tourism is a huge part of the business, according to O’Bryan. “We’re going to have tours where you can actually see this thing operate. There’s chemistry involved; there’s mechanical engineering involved,” he said.
“We will have a retail shop in our front. At the end of the tour they can buy our t-shirts or they can buy our hats, mugs and things like that. We can’t sell beer out of our building.”
“At the end of the day you forget what the end product is,” O’Bryan commented on the stigma some attach to beer. “At our core we are manufacturing. We will be bringing manufacturing jobs, tourism, and a whole plethora of other positive aspects to Water Valley.”