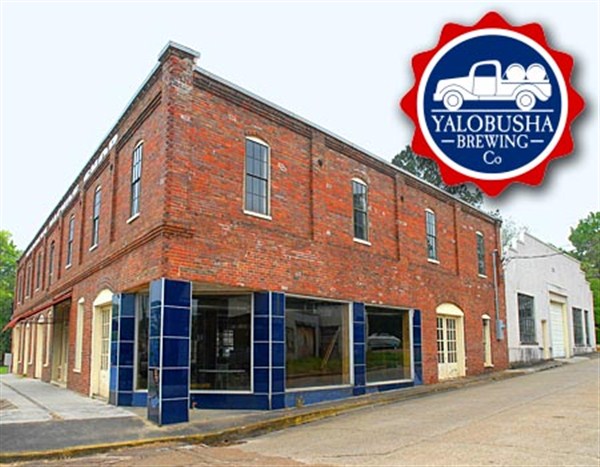 
WATER VALLEY – If all goes according to plan, Yalobusha Brewing Company could have a run just in time for Watermelon Carnival weekend.
The product will be small run of specially-brewed root beer or ginger ale for carnival goers.
That’s just one of many developments following last week’s breaking news of a craft brewery opening on Main Street in Water Valley in the old Hendrick’s Machine Shop. Brewery co-owners Andy O’Bryan of Tula and Dr. Mac Nichols of Oxford have released more details about what will be the state’s fourth micro-brewery and the first in north Mississippi.
Both men attended last week’s Chamber of Commerce banquet and reached out in an effort to meet as many people in town as possible.
“I have not heard a single negative comment, the reception has been great,” O’Bryan told the Herald during an interview Monday.
O’Bryan had spent part of the afternoon meeting with neighbors in the vicinity, both homeowners and business owners.
“They were all very nice and welcoming,” O’Bryan told the Herald.
Equipment has been ordered and is scheduled to arrive in late June, giving the brewery a month to get set up for the first brew.
O’Bryan also outlined the new product lines the company will brew.
“We are not interested in products that are run-of-the-mill. This will be akin to somebody who is a connoisseur of wine, they would want to get this product.”
Although more expensive than bulk-brewed beer from the big beer companies– the price will be relatively cheap for the craft beer market, according to O’Bryan.
The company will initially start off with three different beer products.
“I would rather have fewer products that would all be really, really great products, rather than have  a dozen products that maybe only a couple of them are great and others are average,” O’Bryan explained.

Job Outlook
While Amos Harvey has been hired as the general manager, other positions will be filled in the coming weeks and will include a head brewer, two assistant brewers, a human resource manager, a marketing/social media director and others. The company will initially employ 10-15 in 2013 and possibly double in 2014.
Applications can be e-mailed to info@yalobushabrewingcompany.com. Interviews will also be conducted on-site at the facility at a later date.
The company has also established a partnership with the Haley Barbour Center for Manufacturing Excellence at the University of Mississippi as an official internship partner. Chemical engineer John Hunter is the first intern selected through the program to assist at the brewery.