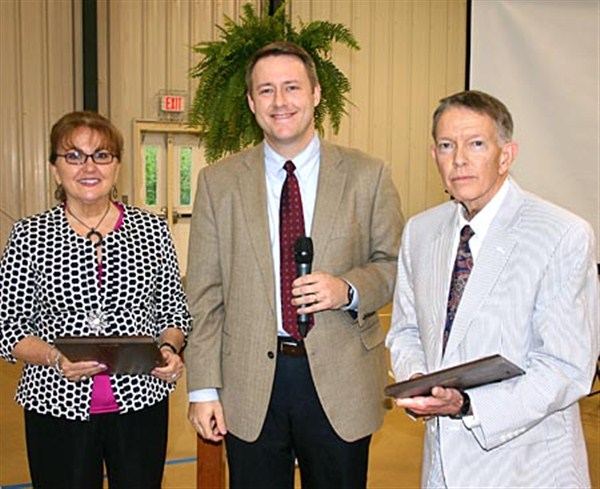 
WATER VALLEY – Whether is was homegrown, global or entrepreneurial, business success was the story of the night at the annual Water Valley Chamber of Commerce banquet.
Mayor Larry Hart kicked off what would be a series of positive updates for Water Valley in his annual State of the City Address.
Hart started with a report on Allied Group, explaining the business will move to a new location in Water Valley in May. The business has been temporarily working out of a county-owned building in Coffeeville as the city constructed a new building using grant funds.
“They hope to start out once they are set up with about 35 employees,” Hart said. “But they are telling me their sales are very strong and they see that number increasing pretty quick.”
Next Hart reported the poultry plant’s work force had doubled to 200 people during the last year.
Hart then introduced Andy O’Bryan and Dr. Mac Nichols as the owners  of a new Main Street business, Yalobusha Brewing Com-pany.
Hart explained the craft beer brewery business would  compliment the special emphasis on arts and crafts in recent years of Water Valley.
“Guys we appreciate you investing your time, effort and money in our city. We trust you are going to have good success at it,” Hart said.
Speakers from three of the county’s largest employers followed Hart, continuing the theme of positive economic news for their plants.
Cayce Washington was first to take the podium in what was one of the most touching stories of the night.
Washington explained the impact of the community on the success of his company, starting when he established Valley Tool Inc. at age 25. As a privately owned business, Washington pointed to his “board of directors,” as driving the success of his business.
This board includes his wife, Michelle, as the brains of the operation; his bank, Mechanics Bank, who was willing to take a risk on a “country boy” with no college degree.
Most importantly, Washington cited the Lord, who has opened doors that could only be described as blessings.
With this support and the backing from the community, Washington reported his business currently employees more than 150 people and had a $1.3 million payroll in 2012.
“All because you believed in a local boy,” Washington said.
Keeping in tune with the upbeat tone for the banquet, Washington added that his company could be on the verge of doubling in size if a deal on the table becomes reality.
“It’s about an 80 percent chance,” Washington explained.
BorgWarner Human Resources Manager Rodney Francis followed Washing-ton. Francis acknowledged that the global economic downturn created tough times at the local level, especially during 2008 and 2009.
“Since 2009, we have not had to lay off anybody,” he reported. The company currently employees 480 in Water Valley, and is responsible for many indirect jobs in the community.
Francis also touched on BorgWarner’s business outlook, reporting there are several things in the works which could have a “real positive impact.”
Windsor Foods CEO Joe Sablich was the final guest speaker for the night. Sablich  reported he was a native of Mississippi, growing up on the Gulf Coast, and had returned to work in his home state after almost three decades.
Sablich presented a slide show that showcased his company’s frozen brands as a leading manufacturer of frozen ethnic foods.
Nationally, Windsor Foods employs almost 2,400 people, Sablich added.
“Oakland right now is at 300 (employees). We have a couple of projects in the works… Hopefully by the end of 2014 we will be a little over 400,” Sablich added.


WATER VALLEY – While the highlight of last Thursday’s Chamber of Commerce banquet was an upbeat economic report, the event also marked other important annual business.
Topping the list was the presentation of the Braswell Hatcher Award, an honor bestowed annually on an individual or couple based on service to the community. Chamber President Daniel Martin presented the coveted award to Joe Elliot Jr. and Patsy Wilder, tracing their 13-year commitment to restarting the Watermelon Carnival.
“In 1980, 39 years after the carnival ended a couple stepped up and decided they could revive the carnival,” Martin explained. Year after year, they worked on the event.
“Joe Elliot Jr. and Patsy Wilder, for your service to the community, thank you so much,” Martin said as the individuals were each presented a plaque.
Martin then reflected on the year’s accomplishments and the role of the Chamber.
“It’s been an interesting year, I’ve never held a position like this. I have strived to do things and increase interest. I felt like we made steps in the right direction,” Martin said.
The outgoing Chamber president pointed to the Chamber board, members and elected officials as all striving to serve Water Valley.
As the night wound down, Martin turned the gavel over to incoming president Tyler Hill,  who  set the tone for the new year.
Continuing the annual tradition, Hill thanked the outgoing board of directors including Clay Ashford, Linda Bass, Jeff Bynum and Bennett Crow.
“We would like to thank them for their dedication,” Hill told the group.
Next he recognized the Chamber of Commerce officers including  vice-president Janet Dickey, secretary Glenda Gordon and treasurer Ron Hart.
Hill also recognized the remaining 2013-2014 Board of Directors including Tonya Eubanks, Michael Fonte, Kimberly Ingram, Nell Jobe, Daniel Martin, Drew McGehee, G.R. Orndorff and Dale Tyler.
“I want to challenge all of us to support and promote our local businesses,” Hill added in a pep talk that concluded the night’s activities.