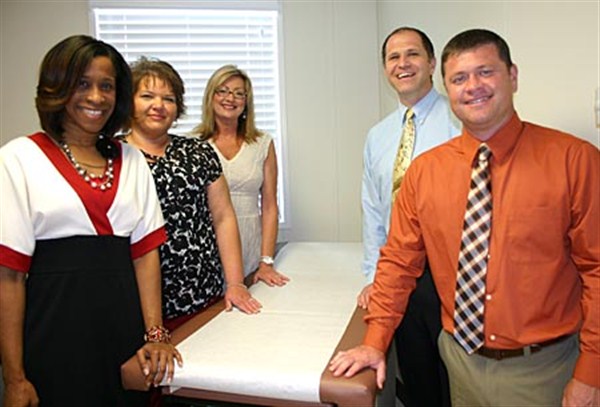 
OAKLAND – With the opening of the Oakland Medical Clinic Monday, Yalobusha General Hospital now operates medical clinics in all three municipalities  in the county.
Hospital officials hosted an open house from 2 to 4 p.m. Sunday afternoon and the clinic was open for patients Monday morning.
Hospital Administrator Terry Varner reported the investment would be around $300,000 for the facility.
“I budgeted 10 patients a day for the first year, which would be the break-even point,” Varner told the Herald Sunday.
Varner explained the size of the building could accommodate traveling doctors and specialists, similar to services already offered in Water Valley and Coffeeville where smaller populations will not accommodate full-time specialists.
The hospital has also partnered with SUNRx for a pharmacy inside the clinic. The company provides automated solutions that help community health organizations manage 340B, PAP, GPO and other discount drug programs and comply with government regulations.
While work is complete on the inside of the facility, exterior work not completed will include brickwork.
Varner also announced Sunday that the hospital will build a new clinic in Coffeeville after outgrowing it’s current location adjacent to the county courthouse.
“We have people sitting in their cars waiting to see the doctor, there is not enough room inside,” Varner explained.
The Coffeeville project is budgeted in the neighborhood of $650,000.
The upbeats plans shared by the hospital administrator also included Water Valley, where Varner said the hospital has recently purchased the former funeral home building on Frostland Drive. The hospital will operate an adult daycare out of the facility.