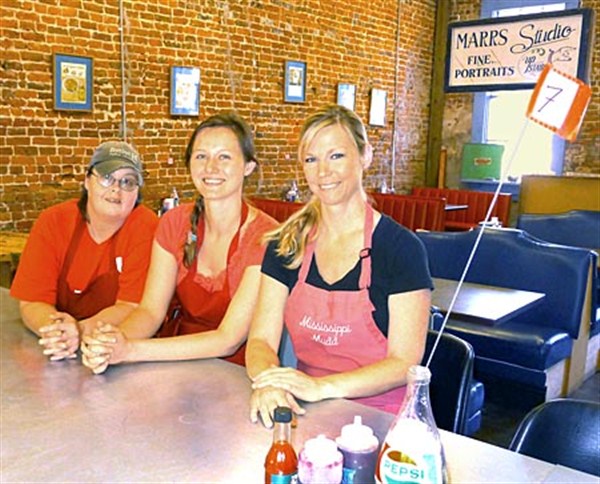 The team at the B.T.C. Old Fashioned Grocery including (from left) Dixie Grimes, owner Alexe van Beuren and Cora Ray are celebrating three years this week. – Photo by David Howell


WATER VALLEY – Who would have thought an old-fashioned bologna sandwich would shape the future of a business that would become a major success for Main Street?
Three years ago, on May 1, 2010,  Alexe van Beuren opened the B.T.C. Old Fashioned Grocery as an alternative for organic and home-grown produce and meat intertwined with health food, cold cuts and specialty items.
Admittedly it was a slow start–even before the store opened there were some raised eyebrows as van Beuren and her husband, Kagan Coughlin, purchased the  three-story building in full need of renovation.
To put it bluntly, “Everybody thought we were out of our minds,” van Beuren explained.
They didn’t have the money to hire a contractor and Coughlin methodically labored for over almost five years, working nights and weekends, as he maintained a full-time day job.
“I have got to give him credit,” van Beuren explains on the eve of the third anniversary. And while Coughlin gets the credit for the renovation, it was circumstances that led to the downstairs space becoming a grocery store.
“We had a (empty) building and were frustrated to have to go north to Oxford to buy Billy Ray’s (Brown) milk,” Beuren explains. So with no experience she launched the niche grocery store to fill the unused space on the first floor of what was still referred to by the locals as the Parker building.
As the business slowly gained momentum,  it was the cold cuts van Beuren offered that would prompt her to add the cafe. She had the simple ingredients to make an all-time favorite sandwich, bologna and hoop cheese–and customers recalled fond memories of a long-ago store that served an all-time favorite sandwich.
“I had dozens of people telling me about eating bologna sandwiches at Johnson’s Grocery,” she explains.
Located on Central Street for decades into the 1990s, the late Dale Johnson served the cold cut that seemingly left an impression on his customers, not only for the classic sandwich, but also the feel of an old-fashioned business in simpler times.
So the sandwich and soup cafe was added to the B.T.C. and the menu naturally included the “Country Boy,” a bologna and hoop cheese sandwich with mayo.
The cafe was a hit and the success, interwoven with the resurgence of many other businesses all across Water Valley, helped propel the entire town into the national spotlight with countless stories in publications and magazines across the country.
And while that support has been great, van Beuren’s gratitude remains steadfast for her local customers.
“Folks talk about people in small towns being unwelcoming and rigid. That’s not true here at all,” she explains.
“People were willing to bear with us in the beginning, especially when we didn’t know what we were doing,” van Beuren adds.
She strives to maintain true to her roots–serving local customers with an affordable lunch and groceries.
“We keep our produce cheaper than the grocery store to make sure people in Water Valley have a good reason to come in here,” she continues.
As part of that, stocking quality produce is fundamental for van Beuren.
“Some of it is local, some is not. Some of it is organic, some is not,” van Beuren notes.

The Team
During the three years serving her valued, local customers, van Beuren has assembled a team to meet their expectations. As a member of the team, van Beuren manages the produce, while Cora Ray handles the bakery and Dixie Grimes runs the cafe.
Ray was on board almost from the beginning making her famous pies and desserts.
“She has been supportive from the get-go,” van Beuren reports. “I have people stop by and buy a fried pie. They will come back and buy five more.”
Over mid-way through the operation, van Beuren hired Grimes to run the cafe.
“She has five-star restaurant experience,” van Beuren reports. An Oxford native Grimes worked on the square  in her hometown for decades.
Grimes had been working in Texas when she returned to Mississippi to work in Water Valley.
“It was going to be a temporary stop” van Beuren said. “But she got attached to the small-town environment and those loyal customers.”

The Future
After the unusual twists and turns that have shaped the first three years of the B.T.C., van Beuren is very non-committal about long-term plans for the business.
But on Wednesday, Thursday and Friday, she will commemorate the anniversary with a special meal–the country boy brown bag special.
This includes the bologna sandwich, a drink, chips and a cookie all for only three bucks.
Beyond that, “We just take it week by week,” van Beuren reports.
For her, the reward for operating the Main Street business in a small town is a daily affair–work is only a short walk away, which means the kids are in close vicinity, and spending each day with friends and neighbors who are her customers.