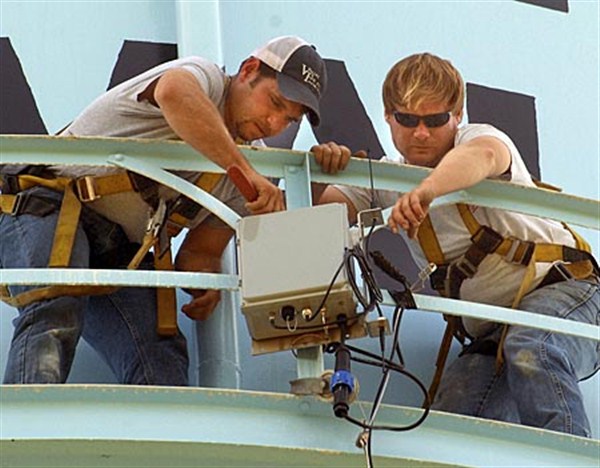 
WATER VALLEY – The electric department is helping field test state of the art data collection equipment that  is part of the city’s advanced metering infrastructure.
Workers from the department installed three of the Mueller Systems Mi.Hub data collectors at points around town last week including the communication tower at the water department headquarters and the water tank on Stephens Street.
The purpose is to see how the equipment operates in the field, according to Electric Department Man-ager Andy Hall, who added that the equipment is being provided at no charge. “A considerable savings to the citizens.”
The collectors communicate with “smart” utility meters by radio and can retrieve meter readings and other data that can be immediately viewed by utility personnel.
The new system will save money for the electric department by providing   readings directly to the business office. No longer will a meter-reader be required to go house to house and utility service can be turned on and off from the office. The system will also report power outages and pinpoint their location.
Eventually city utility customers will be able to monitor their use of electricity and water online, as well. That will allow customers to save money when TVA begins billing at “time-of-use” rates and charges the Water Valley Electric Department more during peak use hours.  The “time-of-use” rate structure varies between seasons and during different times of the day; afternoon in the summer is the highest cost period, early morning in the winter is the second highest cost period, and spring and fall are the lowest cost periods.
Otherwise, the cost of electricity would have to be averaged and customers who are willing to conserve would be paying for those who are not. Completion of the system is still many months away, but Water Valley is ahead of other cities in the TVA system, according to Hall.