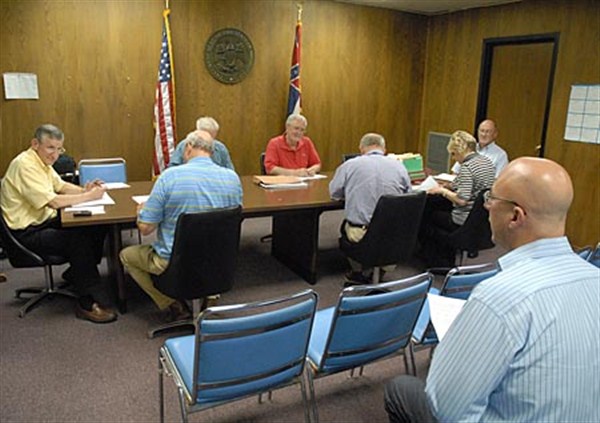 Main Street Director Mickey Howley gives his report to aldermen at their meeting May 7.


WATER VALLEY – Nationally known retail consultant Margie Johnson will be in town June 4 to share her expertise with local businesses.
The Mississippi Main Street Association is sponsoring the visit, according to Water Valley Main Street Director Mickey Howley.
Howley explained to city aldermen at their May 7 meeting that Johnson would meet with merchants at a morning meeting upstairs over the B.T.C. Old Fashioned Grocery. The meeting will not only be for Water Valley business people, but for others from all around the area.
He added that in the afternoon she would work specifically with Water Valley’s Main Street offering individual merchants advice on what they can do to “bump up” their retail sales.
Howley also thanked the mayor and aldermen for the cooperation from the city during the World’s Largest Crappie Festival on May 4. “The park looked great,” he said, praising the work of the Street and Sanitation and the Parks and Cemeteries Departments.
He also noted the work of the Police Department and the Electric Department.
Howley continued his report, telling aldermen that the weather had put a slight crimp in the Farmer’s Market. “The old rule for Farmer’s Markets is that if you don’t have tomatoes, you don’t have a market.”
He added that the vendors have asked that the opening be put back until June 1.
Among other actions at the regular “first Tuesday” meeting, Aldermen:
• Accepted the low bid of $502,998.87 from Northwest Contracting Services, Inc. for sewer work.
• Approved invoice number five from Goodwin Construction Co. for $54,739.05 and Willis Engineering for $6327.10 for work on the “spec” building located on the old Bondafoam property.
• Authorized a $7,136 change order to Goodwin Construction on the “spec” building to add a concrete shipping dock, ramp and pad at the front entrance.
• Heard from Alderman Larry Bell regarding problems with a utility pole in the 1600 block of Central Street that has been struck by vehicles. “That’s the third time that pole has been hit,” said Bell, referring to an incident early Saturday that took out the pole and knocked out power north of that point on Central, including Dogwood Lane, for about eight hours, Bell said. “We need rails or a fence put up there.”
Mayor Larry Hart said that he had instructed Mike Scroggins of the Street Department to gather some cost figures on a guardrail.