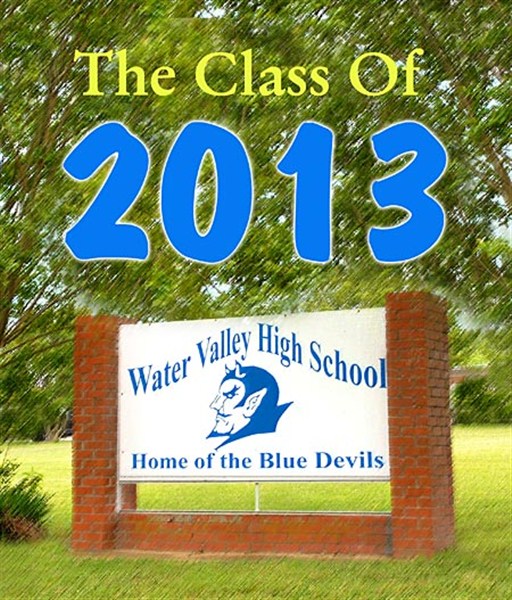 
WATER VALLEY – The WVHS Class of 2013 is going to be remembered as non-traditional.
At least, that’s how their principal, Dr. Glenn Kitchens, fondly recalled his time with the class.
Dr. Kitchens said that three things come to mind when he thinks about the graduates.
“One, I don’t know that there’s a class that I’ve had in my ten years here that have had so many individual students face so much adversity. I say that because, to their credit, so many of those individuals have taken that situation and hung on for the hope of graduating from high school.”
“The second thing that comes to mind is that – and I don’t really say this negatively because sometimes I wish I was more this way – this is a group that is not afraid to live on the edge,” he continued. “In fact, they just kind of live on the edge.”
Kitchens said that the third thing that comes to mind about the class is they are unique in their goodness. “There are quite a number of young men in this class who have faced very many challenges just trying to get a high school diploma.”
“There are some of those same young men who may not take the most traditional route of completing high school and making their way into being an adult citizen,” he added. “That group of people I am talking about, however, is a group of people that if I had to go to war, that’s who I want to take with me.”
“What I see some of them being able to do five, ten years down the road, that some people might not be able to do, is compensate for what is missing and to be of service in a unique way,” the principal said.
Dr. Kitchens had high praise for Valedictorian Mason Ward who is joining the Navy and will enter Seal training. “That’s a little nontraditional for your standard Valedictorian these days. It’s a little removed from what a lot of the top percentages of high school graduating students choose to do in this day and time.”
“But for me I just take a whole lot of pride in that. Because we need all level of people serving in our armed services,” he continued. “Here’s a kid who had a lot of options and that is the one he chose. I’ve very proud of him for making that decision.”
The principal described Ward, who is also the Star Student, as a “great, great kid.”
Dr. Kitchens also praised Salutatorian Amber Kilpatrick who is going to begin her higher education at Northwest in a clinical laboratory technician program before going on to the University of Mississippi Medical Center.
He noted that so many grads leave high school and don’t know what they want to do and don’t look at all the possibilities for careers. “They think more in standard, traditional terms. ‘I’m going to go to college and major in Liberal Arts, I’m going to be a teacher, I’m going to be a doctor,’”.
“This group of kids is so incredibly different from any other group I have seen in that they don’t buck the system from the perspective of rebellion,” Dr. Kitchens said. “They’re just very comfortable, very happy, very confident in just being who they are. Their expectations are their expectations, not your’s, or the community’s, or society’s, or the world’s. It’s their expectations.”
He admitted that the class was challenging and frustrating from the point of view of a traditional educator. “They are a very non-traditional group. But, there are a lot of things about them that you have to applaud.”
“As a whole, they are very satisfied with being competent. That’s ok,” he said. “That frustrates the educational establishment. But, at the end of the day, that’s really ok.”
“It will be interesting what a non-traditional group goes out into life and does. It may be that they are just the first of a new chapter and change in life. They may reflect what we will be seeing for several years until the next big change.”
But in the end, he said, “They’re going to walk.”
“They’ve earned their diplomas – many of them by the skin of their teeth – but, they’ve earned them,” said Dr. Kitchens.