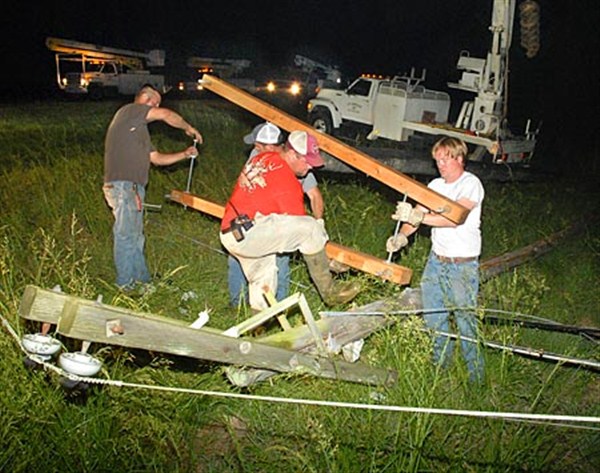 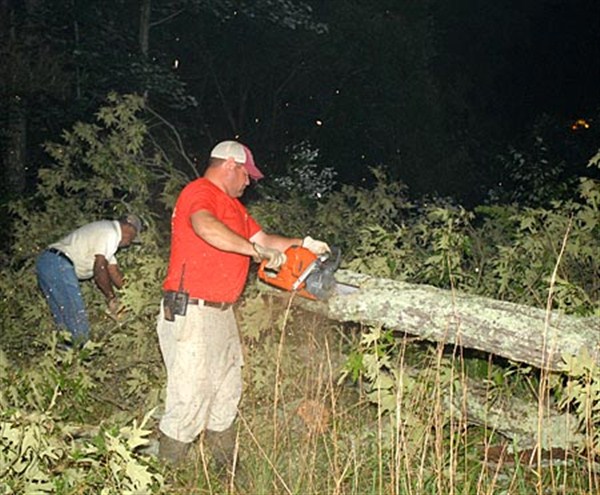 
WATER VALLEY – Quick action by Police averted a near disaster Saturday night when utility lines fell across the Hwy. 7 Bypass between North Main and Central Streets.
An oak tree located on the utility right-of-way just south of the bypass fell just before 11 p.m. pulling down a pole on the south side of the highway. Electric lines along with television and telephone cable fell across both lanes.
Police Sergeant Bubba Jackson was first on the scene and blocked the northbound lane with his vehicle. Jackson said that a southbound 18-wheeler truck was rapidly approaching and he ran across in an attempt to flag down the truck.
When the driver finally saw Jackson, he applied brakes and came to a stop, but not before hitting the lines and dragging them about ten feet, according to the police report. The driver wasn’t injured, but the truck was slightly damaged.
Officers Chris Blair and Luther Folson arrived and blocked off both lanes of the bypass while the Electric Department crew and representatives of the telephone and cable companies completed repairs.
In another action, Police solved break-ins at Davidson Elementary School with the help of a parent. The mother of a 13-year-old juvenile called to report that her child had several electronic items that he wasn’t supposed to have.
With the mother’s permission, Officer S. Crenshaw questioned the youngster last Sunday and obtained information about the break-in that occurred late Thursday, May 9. During that break-in, a laptop computer was taken from a classroom in the 5th and 6th grade building.
The juvenile also provided information about another break-in that occurred over the past weekend during which additional items were taken and one classroom was ransacked. Several items taken from the school were recovered.
Police are investigating yet another school incident from this weekend not connected to the DES break-ins. An air conditioner was taken from the agriculture building at the high school on Markette Street.