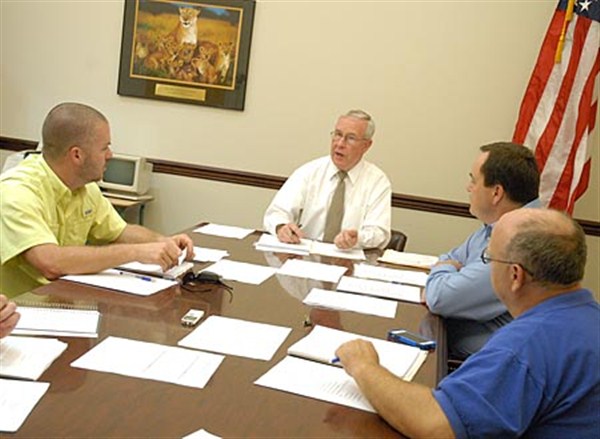 
WATER VALLEY – Security was at the top of a long list of “summer projects” presented to school board members at their recessed meeting Monday night.
“There are a lot of security issues that we have talked about,” Superintendent Kim Chrestman said, referring to discussions between administrators and board members after a recent walk through of school property.
Chrestman presented quotes for a 12-camera security system to be installed at Davidson Elementary School similar to the system at the high school. He said the quotes were for interior cameras only, but exterior cameras are available for an additional cost.
“We may need that after this weekend,” he commented on break-ins at DES and the theft of an air conditioner from the agriculture building at WVHS. (See police story on page 1)
Chrestman continued that he had also talked with vendors about electronically operated security doors for school entrances. And, he had looked at replacing some of the doors with windows with solid doors.
“Some of the doors, at present, will not lock,” he added.
The superintendent also said that he had looked into methods to close the ventilation openings in classroom walls. Suggestions included steel grids or cinder block with grids, which would still allow air to circulate, but would block anyone from entering.
Chrestman said that “the second means of egress” would also have to be addressed for every room. “What that amounts to is a place where children and teachers can exit besides the front door.”
There will also have to be emergency exit signs, some of which will have to be lighted, he continued. “We’ve already started on that.”
The superintendent also described some other routine maintenance issues that need attention over the summer.
“We should address any security issues first,” said trustee Casey Washington. “Anything that is tied to security should have some, in my opinion, priority.”
Board members agreed to call a special meeting if necessary to approve quotes so that work could begin as soon as possible.