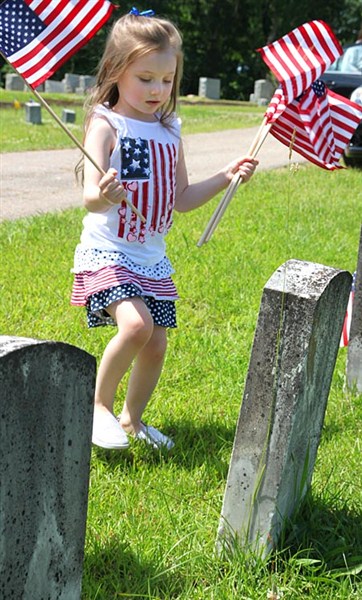 Mackenzie Daughtery was among volunteers who placed almost 1,000 flags on the graves of veterans Sunday afternoon in cemeteries across the county. Other volunteers included Mark and Claudia Anthony, Joyce and Sam Phillips and Mackenzie’s mom, Dawn Mack. – Photo Provided 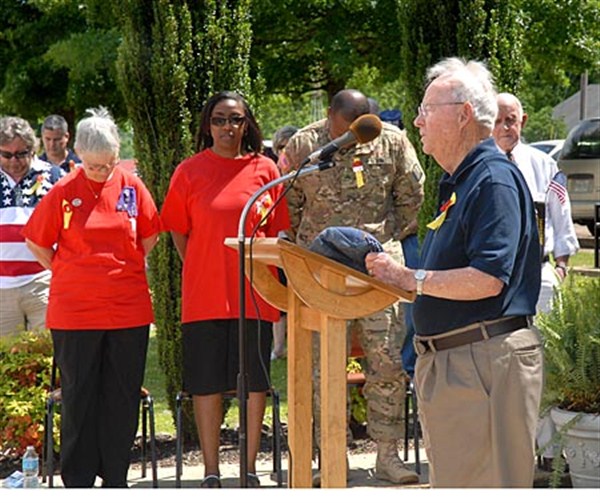 Dr. Rayfor Edgar spoke the opening and closing prayers during the Memorial Day observance Monday at the Veterans’ Monument in Railroad Park. 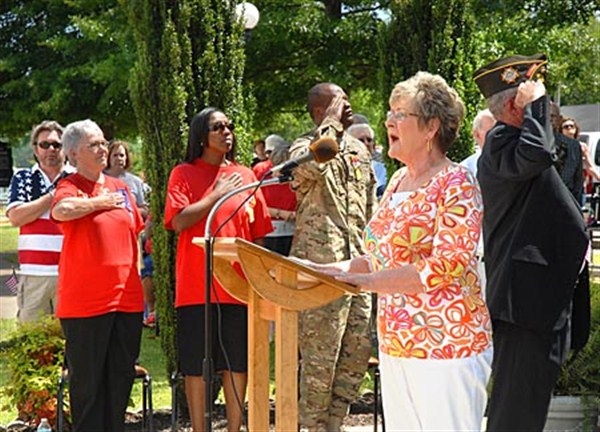 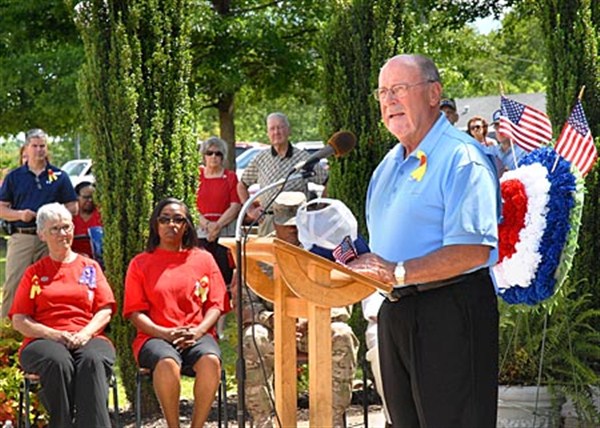 Mayor Larry Hart welcomed the attendees on behalf of the City of Water Valley. 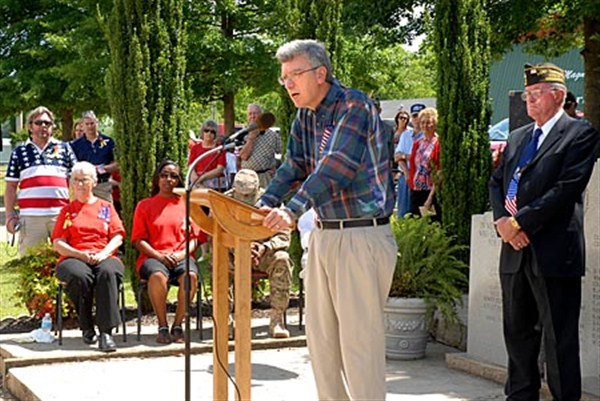 Rep. Tommy Reynolds reminded everyone of the price of freedom. 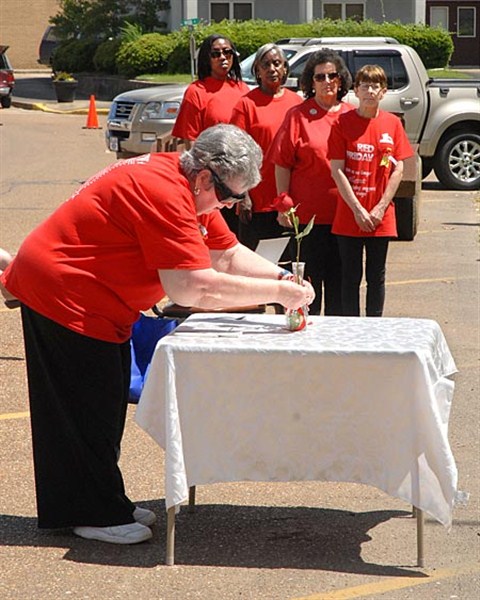 One of the highlights of the event was preparation of the Fallen Soldier’s Table by members of the Post 4100 Ladies Auxiliary. 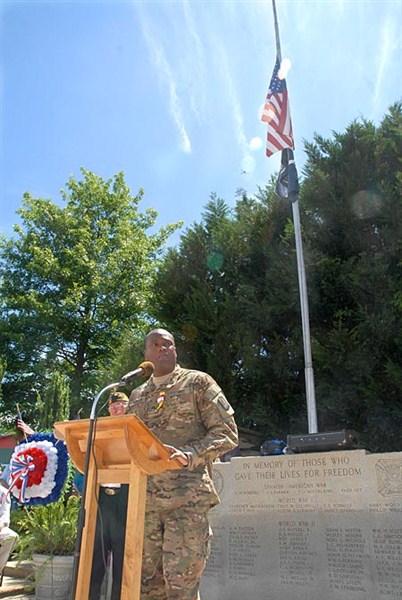 Staff Sergeant Tommy Turner (above and below) of the Water Valley detachment of the 289th Vertical Construction Company spoke during the Memorial Day observance at the Veterans’ Monument in Railroad Park. The annual event is sponsored by Post 4100 of the Veterans of Foreign Wars. – Photos by Jack Gurner 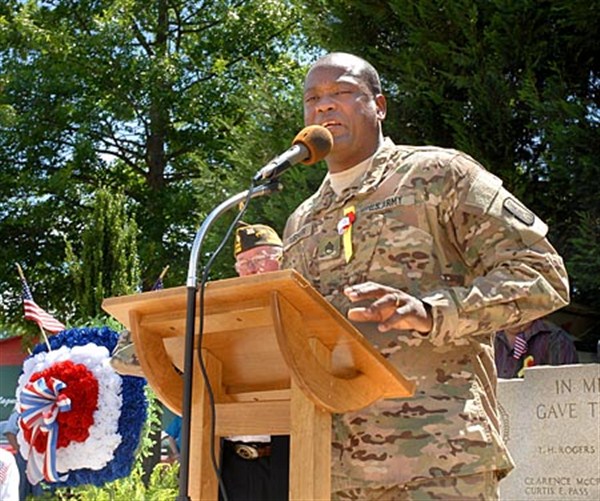 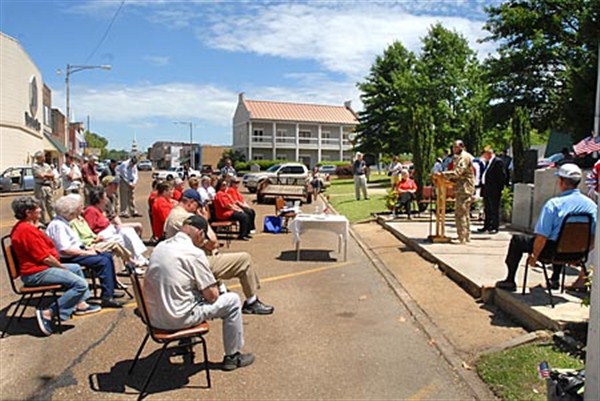 
WATER VALLEY – A local soldier with two combat deployments said Monday that it is time to bring our men and women home.
Staff Sergeant Tommy Turner, a member of the Water Valley detachment of the 289th Vertical Construction Com-pany, was the guest speaker at the Memorial Day observance sponsored by VFW Post 4100.
This was the second time for Sgt. Turner to stand before the Veterans’ Monument in Railroad Park on Memorial Day. Last year he spoke right before his unit left for Afghanistan and this year he has just returned.
Sgt. Turner said that the American loses are senseless. “I’m not going to say that we can’t win. We can win anything with God. With God all things are possible,” he continued. “But, it’s a hard fight. You don’t know what the enemy looks like.”
According to Sgt. Turner, the enemy is disguised and there are improvised explosive devices all over the place. “You’ve got people who are willing to put on a suicide vest and blow themselves up to take you out.”
“Somebody might not agree with me,” he added. “Somebody might say ‘he is a coward.’ But, by a long shot, I’m not a coward. I really do think it’s time. We’ve lost enough soldiers over there.”
Sgt. Turner said that he was with an engineering unit during this deployment, which included carpenters, masons, plumbers and electricians. “We were over there to train the ANA (Afghan National Army) to take over their country…to build up a government for them.”
“In the midst of that the ANA was killing our soldiers. We’re over there helping them and the ANA is killing our soldiers. And, we still want to send our people over there in harm’s way.”
Sgt. Turner acknowledged that it is better to go over there to fight than it is to have them come here. “We’ve either got to take the fight to them or they are going to bring it here.”
He gave as example the bombing of the Boston Marathon. “Those people over there are ruthless and they don’t care,” said Turner. “Anytime that they will take one of their own loved ones and strap a bomb to them and they think they are going to see Allah, they’re serving the wrong God. I am not going to teach my children to believe in that kind of stuff because it is wrong.”
Earlier in his talk, Sgt. Turner praised Water Valley for supporting the 289th during their deployment. He first thanked Sam and Joyce Phillips of Post 4100, who “played a big part in this deployment.” He also thanked Mayor Larry Hart and the Post 4100 Family Support Group.
Before Turner spoke, Post 4100 Commander Sam Phillips opened the observance at 11 a.m. noting that the approximately 75 people in attendance were there to honor those who had fallen in the service of their country.
Phillips introduced Dr. Rayford Edgar, a veteran of World War II, who offered a prayer. Water Valley’s First Lady Betty Hart, who sang the National Anthem, followed him. Next, a veteran from the Post and a member of the ladies’ auxiliary placed matching wreaths at the monument.
Mayor Larry Hart welcomed those gathered on behalf of the City of Water Valley and reminded everyone to thank America’s veterans for their service. He added that Water Valley’s “National Guard Boys” were home, referring to the local detachment of the 289th. “We thank you guys and appreciate you so much,” Hart said.
Representative Tommy Reynolds followed Hart and reminded everyone that former President John Kennedy, a wounded World War II veteran, once said, “A nation is judged not by the men it produces, but by how it honors those who have sacrificed for that nation.”
Reynolds continued that it is up to us to make certain that those who have died for this country did not die in vain. “But what they died for – to preserve our freedom, to preserve liberty and to preserve justice in our country – remains alive for all.”
Next, Joyce Phillips, Ladies Auxiliary President, and members of the auxiliary prepared a Fallen Soldier’s Table. Each element of the table setting symbolizes something specific, for example salt sprinkled on the table represents tears shed for the soldier.
Commander Phillips next explained the role of the Post 4100 Family Support Group and some of the help they provided for military families.
Finally, Commander Phillips asked Dr. Edgar to offer a prayer and “Taps” was sounded.