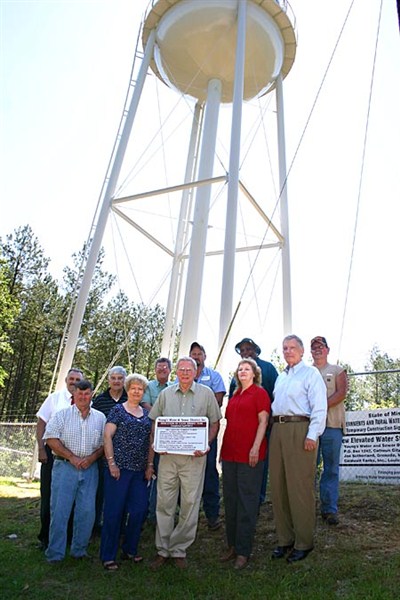 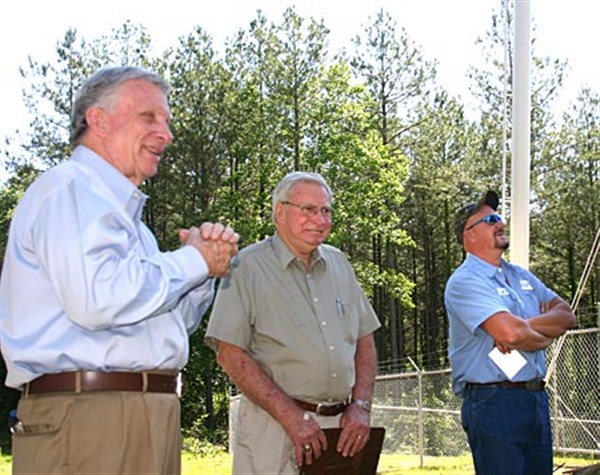 
An aging concrete water tank jeopardizing the water flow for an estimated 1,260 customers served by Young’s Water and Sewer District (YW&SD) is no longer a threat after the construction of replacement tank was completed this spring.
The 100,000 gallon water tank was dedicated in a ceremony last Thursday with board members of YW&SD, along with county officials from Yalobusha and Calhoun at the tower site in southeast Yalobusha County.
The project started over 30 months ago when YW&SD officials appeared before Yalobusha supervisors requesting help after the 1979-model concrete tank had developed an unrepairable leak in the bladder.
If the bladder had completely failed on the old tank, the water district would have to rely on one existing tank to supply water, a problem that could have restricted water use for customers in Calhoun, Grenada and Yalobusha counties until the new tank was completed.
“We were kind of nervous that people in three counties were going to turn their faucets on and nothing was going to come out. But we made it, it was a team effort,” Yalobusha County Economic Development and Tourism Director Bob Tyler explained during the tank dedication.
Tyler got involved in the project in late 2010, helping to secure state funding after project engineer Joe Sutherland explained the cost of the tank would be a hardship for the water association without some matching money.
Sutherland, also speaking at Thursday’s dedication, reported that all three counties supplied letters of endorsement for the project which helped secure money through the state’s Drinking Water Systems Improvements Revolving Loan Fund ((DWSIRLF) Program that funded almost half of the $400,000 project.
“This is my first tank dedication but this is not my first tank to build, I have been doing it 30 years,” Sutherland told attendees. But he pointed to the importance of water and having adequate infrastructure, especially in rural areas.
“Water is still more basic than even, electricity,” Sutherland said.
The engineer also heaped praise on YW&SD  board members for their role in the project.
“I want to thank the board for hiring me, I have got to work with one of the most fiscally responsible boards. They are dedicated to their jobs,” Sutherland added.
“This is a joint effort and a lot of people have been in the trenches,” YW&SD President Sidney Parker explained, also speaking during the dedication.
Parker also praised both Yalobusha and Calhoun counties for helping make the project a reality as well as Yalobusha County Economic and Tourism Director Bob Tyler.