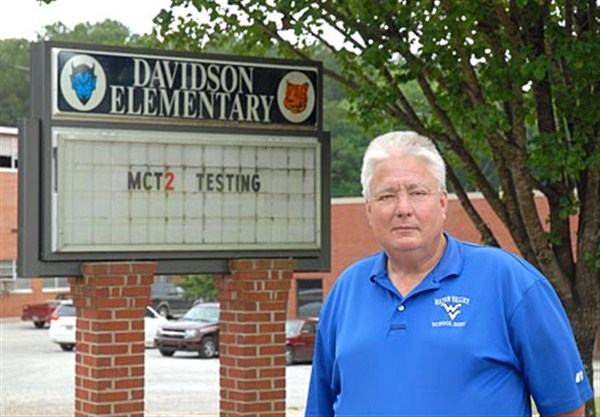 
WATER VALLEY – After more than three decades in education, Chester Drewrey may finally get a little time to go fishing.
The popular principal is retiring June 30 after 13 years at Davidson Elemen-tary School.
Like many people who retire, Drewrey has mixed emotions about leaving. But, he noted in his resignation letter that he was once told that he would know when the time is right for him to move on and let someone else lead. “Well, the time is now right for me to do just that.”
He added that the community has been very supportive of DES. “This is their pride and joy,” he said of the way parents feel about the school.
“It’s a small community. When you’ve only got like 700 students, the parents know each other,” Drewrey added. “There are no secrets in the school. The parents take care of a lot of our problems. It makes our job a little bit easier at times.”
Drewery spent his first year at DES as interim principal. He well remembers a comment made to him during that time by former superintendent Sam Higdon. “He said, ‘I just want you to know that these teachers can do without a principal. But, as principal, you can’t do without the teachers.’”
“We have some excellent teachers. I’d put our teachers up against anyone’s,” he added. “I think I have worked hard trying to get the teachers what they need. And, I make it a point to try to understand what is going on in their life.”
“You celebrate a new birth, you mourn with them over the loss of a family member, you pray with them over struggles in their lives and you guide in helping them become the best teachers for our students,” said Drewrey. “It is a team effort and I will never forget their dedication and love for the students they taught year after year.”
Early Years
Drewrey grew up in the Denmark community in Lafayette County and went to Lafayette County schools where he graduated in 1973.
He remembers playing football under Coach Jimmy Arrington, a Water Valley native. “He had such a positive influence on me. I wanted to be just like him,” Drewrey said.
He took a break after high school and worked as a bricklayer for three years before deciding to go on to college. He got his degree and in 1980 started his teaching and coaching career at Bruce. He came to Water Valley in 1985 and spent two years before going to Lafayette for 11 years. He came back to Water Valley and spent two years coaching before becoming principal at Davidson.
Among his memories from his first year as principal is the Red Ribbon Week. Every day for a week he had to dress up as a different character. “I can remember how the kids loved me being a different character each day.”
He almost quit the day he had to dress as “Rat” and got his photo taken for the Herald. “From that point on my wife had to push me out the door each morning to get me to finish the week in costume.”
Drewrey said that in the 33 years he’s been in education, there have been a lot of changes. And, with all the changes that are taking place, parents are going to have to be very involved in their child’s education. “It doesn’t just fall on the teachers,” he emphasized.

Retirement
Drewrey said that he plans to spend more time with his grandchildren. “I want to make memories with them.”
He said his wife’s father would do something special with their children from time to time. For example, he would cook pancakes on Saturday morning, something they still talk about today. “That’s what I want my grandkids to remember about me. That I’m doing these special things with them.”
“I’m going to hunt; I’m going to fish a little bit and I have talked about raising a garden. I may even find something else to do,” said Drewrey. “I don’t really like to say I’m retiring. That makes you think you are really used up, I guess.”
After thinking a minute, he added, “I may come back down and volunteer to read to kids.”
“Not everyone gets to do what they want in life. I have been blessed in a lot of ways,” said Drewrey of his career. “I’m going to miss it. I’m going to miss the people.”