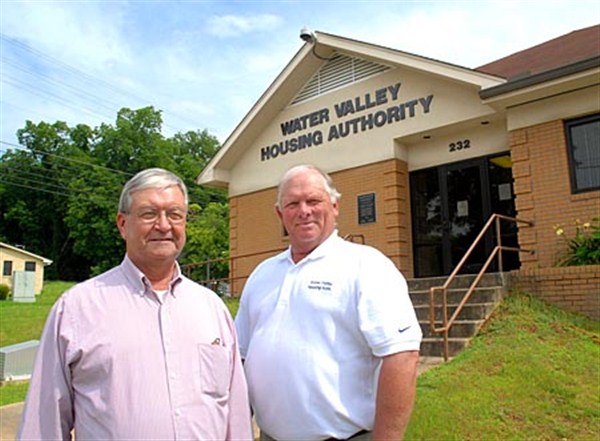 Barron Caulfield (left) is retiring and Ray Brasher will take his place as Executive Director of the Water Valley Housing Authority. Caulfield has served in the position for the past 26 years. – Photo by Jack Gurner


WATER VALLEY – Barron Caulfield is retiring as Executive Director of the Water Valley Housing Authority after 26 years of service.
The announcement, which was made Friday by James E. Moody, chairman of the authority’s board of commissioners, included the promotion of Ray Brasher to Executive Director. Brasher, who has been with the authority since 2001, has served as Maintenance Director and Deputy Director.
Moody said that during Caulfield’s tenure the authority has been through many challenges dealing with changing HUD regulations as well as the changing economies of the times.
Caulfield added that along with the day-to-day challenges of operating and maintaining the apartment complex, it’s hard not to get involved with the personal lives of the people who live there. “Sometimes you have to be friend and counselor,” he said.
He said that among his proudest moments is seeing some of the youngsters who have grown up there excel in their chosen fields.
Caulfield is also proud of the “High Performer” rating the authority received from HUD in 2012 when the complex was at 100 percent occupancy and met other requirements.
He gives credit to the staff and the Board of Commissioners for the success the authority has achieved. “Without a good staff the work just doesn’t get done and the Board of Commissioners has fostered an atmosphere for success,” said Caulfield. “A good working relationship with the Jackson HUD office has also helped.”
One of the things accomplished by Caulfield and the Board was modernizing and maintaining the 200 apartments and other buildings under the authority by using a combination of rental income and grant funds. In 2004, they built a new administrative office using reserves and in 2009 built a new community building with  grant funding.
Caulfield became Executive Director in 1987 following former Executive Director Margaret Kinne. In 1989 he became a certified Public Housing Manager.
He has been active in MAHRO (Mississippi Association of Housing and Redevelopment Officials) and SERC (Southeast Regional Council) and is presently serving on committees with both organizations.