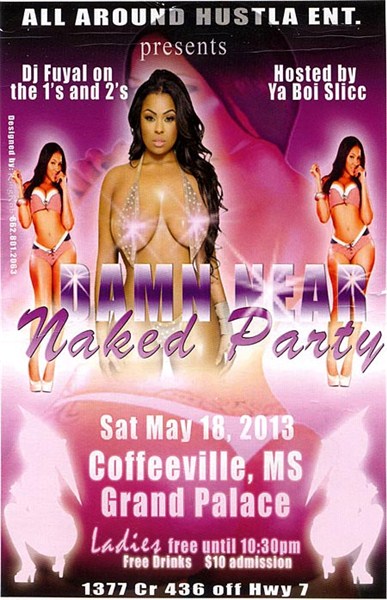 County officials are preparing a new ordinance to restrict the operation of late-night entertainment at clubs. The ordinance will be geared to restrict commercial parties such as the May 18 “Damn Near Naked Party” that includes a fee for admission.


WATER VALLEY – Late-night activities at commercially-oriented parties in the county could be curtailed after Sheriff Lance Humphreys requested help from supervisors.
His plea comes after repeated problems at the Grand Palace, a private club located outside Coffeeville on County Road 436.
Most recently Hum-phreys said his deputies encountered a hostile environment while responding to a 911 call involving an irate customer with a gun during a party advertised as a birthday bash on June 8.
“When we get down there, deputies almost had to fight,” Humphreys explained during a recessed board meeting last Friday in Water Valley.
Supervisors readily agreed to the request, instructing Board Attorney John Crow to draft an ordinance that could restrict parties.
“I will come up with something that is constitutional,” Crow assured supervisors. He also assured supervisors that the ordinance will differentiate between legitimate, isolated private parties and parties “operating under the guise of a private party.”
“It’s not just this one,” Humphreys said about the Grand Palace. “We have another one in the county that deputies are called out to regularly,” he explained.
“It’s kind of ironic that you have to have a security guard to have a birthday party and you almost have a pistol shooting in the middle of the birthday,” Board President Tommy Vaughn said about the June   8 incident.
Also discussed during Friday’s meeting was a May party, advertised as “The Damn Near Naked Party” held May 18 at the Grand Palace.
Both the birthday bash and almost naked parties were advertised on flyers circulated at businesses in Yalobusha and neighboring counties, according to the sheriff.
Humphreys said 17 law enforcement officers worked traffic control during the May party, creating a strain on his budget with the extra manpower.
Humphreys also explained that party-goers are traveling from neighboring counties and as far away as Jackson or DeSoto County.
“I bet we didn’t have five people from Yalobusha County come through the road blocks,” Humphreys continued.
“Here we are spending our tax payer dollars to secure something that is not benefiting our tax payers,” District 5 Supervisor Frank “Bubba” Tillman said.
“That is not the kind of tourist destination we want,” District 3 Supervisor Lee McMinn added
Crow agreed to have details of the ordinance to present to county officials at the next meeting, scheduled July 1 in Coffeeville.