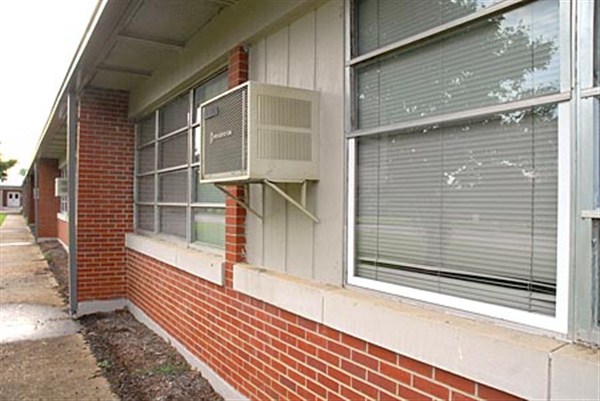 Clear polycarbonate panels made of Lexan® have been installed in the Water Valley School District to provide a second means of egress for students. The panels replace one set of windows to allow quick escape in the event of an emergency.


WATER VALLEY – Clear polycarbonate panels have been installed to provide a second means of egress for students in the school district.
Superintendent Kim Chrestman told school board trustees at their meeting Monday that the Lexan® panels replace one set of windows to allow quick escape in the event of an emergency.
The window replacements are one of several security and school safety issues that are being addressed as part of a list of summer projects now well underway.
Chrestman said that quotes had been received for electronically operated security doors for entrances and video camera systems were being installed now.
He continued that glass windows in school room doors were being replaced with three-quarter inch plywood panels that will include a port to see inside the room. “We think it will look good without having to replace the whole door.”
School officials have decided to close ventilation holes that open into the hallways using concrete blocks.  This will allow air to continue to circulate, the superintendent added.
Chrestman said that five fire extinguishers would be put in five locations in the high school and one at the elementary.
Installation of exit signs is almost completed at David-son Elementary School.
Among other actions at the June 17 meeting, trustees:
• Disposed of cumulative records for the 2007-2008 school year.
“Does this mean that your permanent record is not permanent?” asked trustee Pierce Epes.
Chrestman explained that the cumulative records were different from the permanent records that are kept on file by the school district.
• Scheduled two advertisements and two hearings for the redistricting plan. The ads will appear in the Herald for hearings that will take place July 1 and July 8 beginning at 6 p.m. at the district office building.
• Paid claims and heard the financial report from District Business Manager Randy Goodwin who said the all-important fund balance in district maintenance as of May 31 was $2,215,274.43.