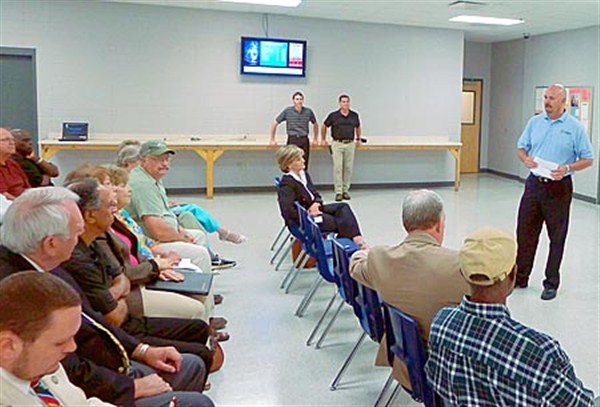 
OAKLAND – Windsor Foods will soon be producing 1.6  million pounds of egg rolls shells annually at its Oakland plant. The news came in a press conference Monday with final details about the long-anticipated bakery expansion at the facility.
The company will spend $3 million to fund the expansion, which marks the third since 2008 when the company spent $15 million to turn the 140,000 square-foot facility from a raw processing plant to a frozen foods plant.
Windsor produces both Asian and Mexican Food at the Oakland plant. Nationally Windsor Foods has 11 locations for manufacturing or distributing the frozen ethnic foods it produces.
Locally the investment means 4,000 square feet added to plant to expand the existing bakery to produce egg roll shells. The investment also means the creation of 10 new jobs added to a payroll that already includes more than 300 employees in Oakland. Nationally, Wind-sor employs almost 2,400 people.
“We have a line here in the factory that actually produces egg rolls. Right now we are shipping egg roll shells in from St. Louis,” Sablich explained.
As part of the expansion, Windsor was awarded a $150,000 Rural Impact Grant through Mississippi Development Authority (MDA). Yalobusha County kicked in $15,000 to fund a 10 percent match required by MDA to help fund the grant.
The investment, both from the company, state and county will also fund infrastructure improvements, safety improvements at the warehouse, updated access to the shipping docks and enhanced security for employee parking.
“I really appreciate all the hard work from this group,” Sablich said in Monday’s press conference. The group ranged from Oakland residents, field representatives for both Senator Roger Wicker and Senator Thad Cochran, Yalobusha County officials, Town of Oakland officials, representatives from North Central Planning and MDA.
“We are going to be the flagship of Windsor. We are working hard to get there,” Sablich reported. “The company is excited about investing here in Oakland. They are excited about the relationship we are building in this community,” he added.
Yalobusha County Economic Development and Tourism Director Bob Tyler helped coordinate Monday’s press conference for Mississippi Development Authority (MDA).
Tyler praised the upper level management team at Windsor.
“Their workers are happy, that is something that is great to achieve,” Tyler said Monday.
Tyler listed a number of important economic development team members who assisted with the project. He also thanked local officials.
“Our county supervisors are the very foundation of what happens,” Tyler added.