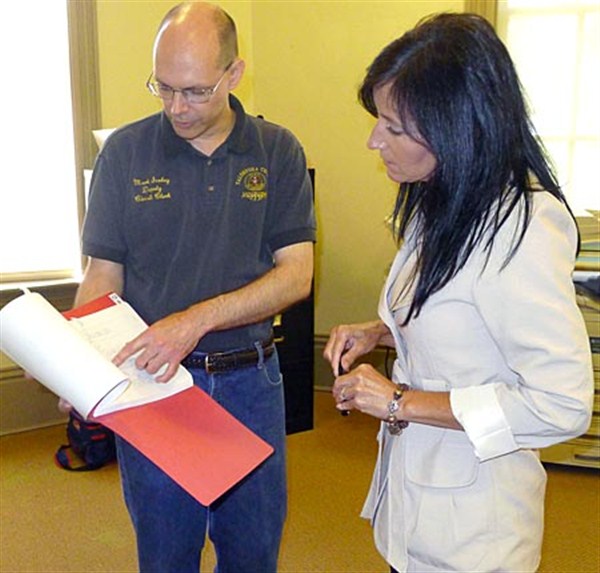 Deputy Circuit Clerk Mark Scobey is retiring at the end of this month after working more than 34 years for Yalobusha County. His replacement, Lawana Fly, started training last week. – Photo by David Howell


COFFEEVILLE – Mark Scobey is retiring as deputy circuit clerk after logging 34 and-a-half years in the courthouse.
Although Scobey’s official retirement starts at the end of June, you won’t find him working this week after he took a week-long vacation, a rare occurrence in his career.
“I think I took a day or two three years ago and another couple days seven years ago,” Scobey said.
His dedication meant customers expected to see him when they visited the Circuit Clerk’s office in Coffeeville. Back in 1979 Scobey was only 16 when he started working for the county. He was juggling school and a full-time job, working on nights and weekends to get the hours. His initial duties were as janitor, but he was deputized to work as a fill-in clerk shortly afterwards under previous Circuit Clerk Mary Sue Stevens.
He continued to work full-time while earning an art degree in college and afterwards as the years passed.
He told the Herald he enjoyed working  in his hometown of Coffeeville and having the opportunity to be able to walk to work if he wanted.
“I live two streets over from the courthouse,” Scobey added.
“Mark is one of the most valuable assets the county has,” Circuit Clerk Daryl Burney said about Scobey’s career. “I am looking forward to him working a little part time in the future.”