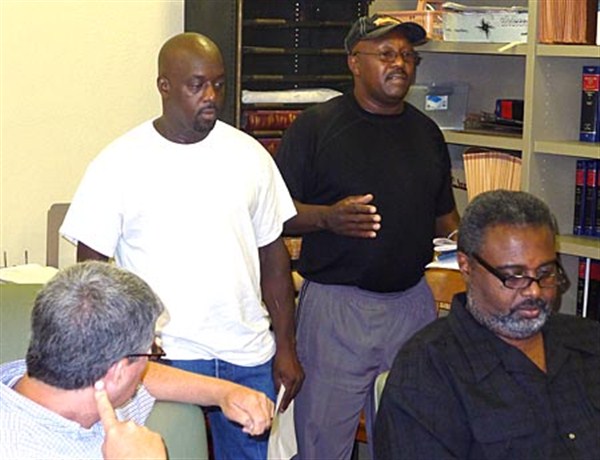 Brothers Terry Hayes (left) and Donald Hayes (right) question recent allegations made against their business during Monday’s Board of Supervisor meeting. – Photo by David Howell


COFFEEVILLE–Club owners and brothers Donald Hayes and Terry Hayes countered claims made last month that problems at the Grand Palace were out of hand and the club was a hostile environment for law enforcement officers.
“There have been a lot of accusations that have been printed in the paper about the place that we run called the Grand Palace,” Donald Hayes told county officials  during the “first Monday” meeting in Coffeeville on July 1.
Specifically the brothers cited a report in the Herald about a 911 call from a security guard working at the Grand Palace on June 8. The guard called 911 after the customer displayed a gun.
Sheriff Lance Humphreys mentioned the incident last month when he asked supervisors to pass an ordinance restricting activity at private clubs in the county after midnight.
“Recently the two papers that I read the accusations coming from the sheriff’s department. I don’t know how it got reported, but  some of it was lies,” Donald Hayes told county officials.
“I didn’t like the fact that it was reported that we put them in the hostile environment,” Donald Hayes continued. “I come to clear my name. I never disrespected any of your officers. Period.”
“Mr. Hayes I don’t think it was you. Specifically, they said you were very nice and not rude at all,” Humphreys countered.
Instead the sheriff pointed to Terry Hayes.
“He was hooping and hollering  and talking about the sheriff’s department was taking payoffs and I wasn’t going to be the sheriff in two months. It was your security guard that came up and told three of my deputies and a Coffeeville police officer that a gun was pulled,” Humphreys replied.
The sheriff added that the security guard hired by the club also thanked law enforcement officials for coming that night before somebody got hurt.
Humphreys’ remarks prompted a response from Terry Hayes, who said the club has always been cooperative when deputies came to the club to do walk-throughs or respond to a 911 call.
“Y’all used to come to the club all the time, I guess we didn’t say thank you one time and y’all quit coming,” Terry Hayes added.
“My guys are answering calls. Our call volume is up,” Humphreys told the brothers.
“When we make a call it is a big deal. You have to get who is calling,” Terry Hayes countered.
“As far as us trying to do right y’all are not going to let that happen,” the club owner explained.
“Do right?” Humphreys questioned.  “You are putting on your flyers that you are selling alcohol up there. You don’t have a permit,” Humphreys said.
“Who is putting on the flyer that we are selling alcohol up there?” Terry Hayes asked.
“Every flyer y’all put up says free mixed drinks. Is that Kool-Aid?” Hum-phreys asked.
“Free mixed drinks, what is a free mixed drink. It’s free,” Terry Hayes answered.
“We want the law enforcement to be involved because things happen and people are going to be people,” Donald Hayes added later in the meeting about cooperation between the club and the county.

Unequal Treatment Allegations
Both brothers also made allegations Monday that they were not being treated fairly, a claim that was also strongly denied by the sheriff and other county officials.
“I get a lot of comments from black people, our people, saying it seems like y’all don’t want black people to have nothing to do,” Donald Hayes said.
“Let me go ahead and stop you. This doesn’t have anything to do with race. It irritates me how it comes out that it is a race thing, it’s not,” Humphreys countered.“It is a right or wrong thing. It is illegal for y’all to be selling alcohol in Yalobusha County. I don’t have the manpower to come up there every single weekend to enforce that. I can’t do it because my budget won’t allow it. And I am not throwing it back on the Board of Supervisors because it is not their fault,” the sheriff continued.
The sheriff also pointed to another business that was cited multiple times for alcohol-related problems.
“Don’t make it like it’s a black or white thing because that gets under my skin because it’s not,” Humphreys said. “I have already heard all your comments on taking payoffs and all this. Y’all just keep doing what you want to do and I am going do my job,” Humphreys continued.
Again, Donald Hayes explained that he had not disrespected the sheriff or his deputies.
“I have not made any comments about taking payoffs,” Donald Hayes reiterated.
“Again, Mr. Hayes, I apologize, I am not talking about you,” Humphreys said.
Donald Hayes then said he wanted to work things out with county officials so “we can get along.”
But he also alleged that other businesses  in the county were treated differently.
“When you make exceptions for some people, you need to try to make exceptions for others. I just don’t like the stuff being printed in the paper that is not true. If it is true, it is true.  When your officer reports some stuff to you, you should ask me if it is true. That’s the reason I came forward today, to defend myself. Because all those allegations in the paper were not true. Really the situation wasn’t as bad as they said it was. The guy standing out there had a firearm in his hand. We just wanted somebody to pick him up and lock him up,” Donald Hays said.

Revisiting History
Donald Hayes also questioned the sheriff on why deputies did not pursue the alleged gun handler, explaining they gave deputies a description of the car and direction of travel as they left the club.
“I thought they should have radioed ahead… We knew they were going to Panola County. They should have tried to get him cut off,” Donald Hayes said.
Humphreys countered, saying his guys were not provided with the name of the gun man.
The topic then shifted to an incident back in 2011 when someone discharged an AK-47 in the air multiple times in the parking lot at the  club.
The club owners have strongly condemned the sheriff’s department for not arresting the shooter, who they identified.
“That’s what I can’t make y’all understand. I can’t arrest him. You have to file the charges. I didn’t see it,” Humphreys told the brothers.
“Let me ask you something, if you came down to Piggly Wiggly and shot an AK-47. Emptied it out there in the parking lot, would you not go figure out who it is?  Business is business. You didn’t go get him. You didn’t try to go get him, or none of that,” Terry Hayes continued.
Mr. Hayes, you have to file the charges on whoever shot the building,” Humphreys said.
“You drove up and didn’t want to hear anything we had to say,” Terry Hayes countered.
“Do you know who he is?” Board Attorney John Crow asked about the identity of the shooter.
“Yes,” Hayes answered.
“Why don’t you walk across the hall over here and file charges against him?” Crow asked.
“For what?” Terry Hayes asked. “That’s water under the bridge.”
“They will issue a warrant for his arrest. The county attorney is obligated to prosecute that case,” Crow explained. “If you are so concerned about what went on down there, go over there (justice court’s office) and do something about it and file charges. He (the sheriff) can’t do  it unless he sees it. That’s a misdemeanor,” Crow explained.
“That’s a misdemeanor? Shooting an assault weapon is a misdemeanor. I seriously doubt that,” Terry Hayes shot back.
“You don’t want to file charges?” Crow asked again.
“I am not going to file charges,” Terry Hayes answered.
“Why not?” Crow asked again.
“He didn’t do anything when I told him,” Terry Hayes answered.
“The sheriff is going to be out of this” Crow continued as he continued to question Terry Hayes about the matter and even volunteered to fill out the affidavit for the charges.

Final Comments
“It’s not about pointing fingers. Hopefully things will work out and be fair,” said Donald Hayes.
“Let me tell you something, this board has been more than fair. You are down there operating a facility, selling alcohol or giving it away, or whatever you are doing, without a permit. Yet you want to come before this board for some type of relief. You don’t want to file charges against people you say are committing criminal offenses. I don’t know what else this board can do. I don’t know what else the sheriff can do,” Crow told the brothers.
“The incident you are talking about filing the charges on, that guy is already in prison,” Donald Hayes added about the AK-47 incident.
Board president Tommy Vaughn then shut down the dialogue, telling the brothers they had ample opportunity to make their case.
“You had something in the paper about some type of ordinance?” Donald Hayes asked.
“Sir if you continue to try to operate in Yalobusha County, sending out brochures with naked women on them and serving alcohol without permits, you think we are going to sit back and do nothing? You’re wrong,” Vaughn said.