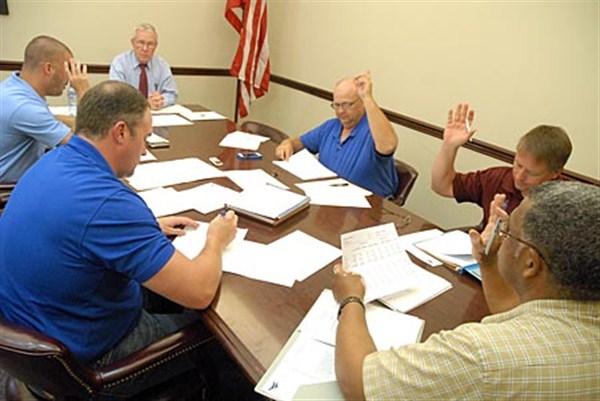 School board members vote to adopt the budget for the coming school year, but deferred implementing uniforms for a year. 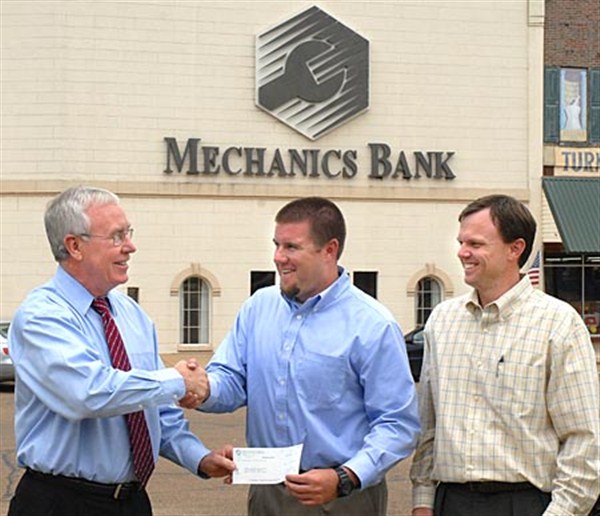 Mechanics Bank, represented by Charlie Edwards (center) and Tyler Hill (right) presented a $5000 check to Water Valley Schools Superintendent Kim Chrestman. The donation will be used to fund new technology, which is part of goal number three of the district’s strategic plan. – Photo by Jack Gurner


WATER VALLEY – Uniforms will not be required for the upcoming school year. But, school board trustees left open the possibility of adopting a uniform policy for 2014-2015.
“We’re a month out from school starting,” Trustee Pierce Epes said during discussion at Monday night’s school board meeting. “There’s no possible way that the retailers in town can get uniforms ordered, in place and have people buy them. And, I am already pretty sure people have already started purchasing clothes for school.”
“Second thing is I want to see what the policy looks like before I say school uniforms or not,” he continued. “I’m for uniforms, but I want to see the policy before I approve it.”
Trustee Taylor Trusty said that the school board has always been very cautious about acting without a recommendation from our administrators. “I don’t think that’s a good idea,” he said.
Trusty has stated he is against uniforms.
“I share Pierce’s feeling logistically,” said Trustee Casey Washington, who is for uniforms. “I don’t think the community is ready.”
“I hate that we’re the ones who have to sort of dictate or make the decision,” he added. “As Pierce stated, we need to hear something from the school administration about what they recommend and how they would do it.”
“The last time we tried to define a “flip-flop” that got us in trouble,” Washington noted, getting a laugh from board members. His reference was to a 2009 meeting during which 40 female teachers asked the board to reconsider their decision on footwear.
Trustee Chris Terry said that he was for uniforms, too. But, he didn’t know the right way to go about it.
Board president Lamar Burgess said that he understood that it is a logistical issue now and added that the discussion should have started the first of the year. “It’s not something we would have to institute for the beginning of the coming school year.”
Burgess continued, “Right now we have publicly stated what our feelings are. Now I think it would be left up to the administration to come back with a policy and a recommendation.”
Burgess has stated his strong support for uniforms as a cost-saving measure for parents, among other reasons.
Epes said that another concern he has is that uniforms should be implemented at the beginning of a school year because parents would have to buy clothes twice if the policy came halfway through the year.
Superintendent Kim Chrestman said that he is neutral on the issue and added that there is not a lot of data that supports the uniform issue one way or the other. “It’s totally dependent on what you are trying to prove in your research.”
He said that from the conversations he has had, opinion is mixed. His research suggested that about 20 percent are for, 20 percent are against and the rest don’t have a strong opinion.
Chrestman said that he is hearing more about teacher dress than student dress “and the professionalism our teachers show at the work site.”
He also said that the administrators have so many things “on their plate” with all the school changes that school uniforms would be a burden for this year. “Right now for my faculty and staff, we don’t need one more thing.”
Chrestman said that he would collect data and look at some other schools’ policies.
“We’ll continue to look at it,” Burgess said, ending the discussion.
Among other actions Monday night, trustees:
• Held a public hearing on redistricting. Although no one was at the hearing, the public will have another chance to voice their opinion next Monday night, July 8, beginning at 6 p.m. in the board room of the central office on Market Street.
• Adopted the 2013-2014 school budget during a separate session that was opened, a vote taken and then the session was closed as required by state law.
• Heard an insurance presentation by Steve Brown of Wellington Associates.
Trustees learned that the district’s insurance would cost $93,237 for the coming school year. That is up from around $70,000. Trustees accepted the quote.
• Approved the tax resolutions for both Yalobusha and Lafayette Counties.
• Authorized the use of the CHART abstinence-plus sex education program for the coming school year.
• Approved Tuesday, May 20, as the date of graduation after a conflict with other schools for use of the Tad Smith Coliseum on the Ole Miss campus.
• Accepted a $5000 donation from Mechanics Banks.
The money will go toward technology, which is part of goal number three in the district’s strategic plan, according to Chrestman.
• Heard the Superintendent’s Report from Chrestman, which is posted below.


Summer projects are continuing at both campuses.  Classrooms and hallways are being stripped, cleaned, and waxed.  The majority of classroom preparation has been completed at both campuses.  The roof on the Ag Building has been replaced. Other projects like the installation of video cameras, installation of a wireless network, and school safety projects are planned to be completed by the opening of the school in August.
School safety and security continue to be a major focus for the summer and for the 2013-2014 school year.  Water Valley School District invited safety inspectors from the Mississippi School Board Association to come in and do a safety audit for the district.  Several safety issues were identified and are being addressed by the maintenance department.  School security plans are being reviewed and updated for the coming year.
Mechanics Bank has donated $5000 to the Water Valley School District in support of the WVSD Strategic Plan.  Under the Strategic Plan, Goal #3 is to provide the technology necessary for teachers and students.  Using this donation to Purchase technology will also help support Goal #1 (academic), Goal #2 (modern facilities), and Goal #4 (culture conducive to learning).  We “Thank” the Mechanics Bank for its support for education in Water Valley.
Water Valley High School Administrators in June completed the High Performance Leadership Institute that began in November 2011.  We had five members of our administrative team.  Dr. Glenn Kitchens, Trey Allman, Brandy Vollbracht, Brad Embry, Kim Chrestman.  Among the many topics covered were:  Leadership Types, Holding Critical Conversations, Teacher Interviews, Use of Data in Making Educational Decisions, MSTAR Training, and Best Practices in Education.
We want to wish everyone a happy and safe 4th of July as we celebrate the founding of our great nation.