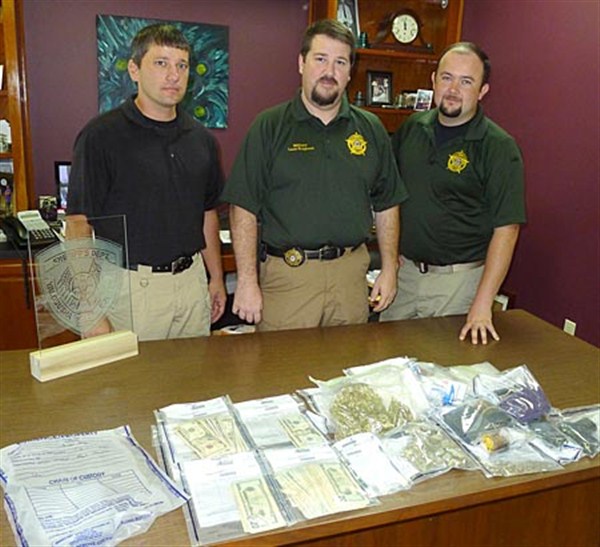 
WATER VALLEY – A local man was arrested Wednesday night following a two-month investigation into an alleged drug operation on Central Street.
Michael Morgan was charged with possession of marijuana with intent to distribute, possession of a firearm by a convicted felon and simple possession of a controlled substance, to-wit ecstasy, according to sheriff Lance Humphreys.
Morgan was taken into custody at his residence at 1520 Central Street after a search warrant was executed around 9 p.m. Officials seized almost three-fourths of a pound of marijuana, $1,784.64 in cash, three ecstasy pills, a pistol and other drug paraphernalia, according to the sheriff.
The serial number on the pistol had also been scratched over which could lead to a potential federal charge for defacing the firearm.
“I contacted ATF, it will be up to them whether they want to pursue that angle of the case,”Humphreys told the Herald.
The sheriff said complaints from the neighborhood about alleged drug activity at the house prompted his department to start work on the case in early May.
“I know a lot of time people get frustrated when they see what appears to be obvious drug activity and we don’t come lock them up,” Humphreys said.
The sheriff explained that officers have to build a case that can take weeks or even months before taking action.
“We want to make sure we can get a conviction and there is procedure we have to follow to make that happen,” Humphreys added.
That procedure typically includes multiple drug buys using a confidential informant, monitoring the traffic in and out of the residence and even detailed surveillance of a suspected drug house.
“Then we can get a judge to sign a search warrant and go in and collect evidence in a manner that will stand up in court,” the sheriff said.
Assisting deputies with the arrest were agents with the Mississippi Bureau of Narcotics and Constable Brent Anderson.
“Brent had been involved from the beginning of this case,” Humphreys added.
Morgan is current in the Yalobusha County jail awaiting an initial appearance. A convicted felon, Morgan was sentenced in 1992 for aggravated assault.
“He had only been off paper for two years,” Humphreys said, referring to the 15-year sentence, plus five years probation that ended in early 2012.
Morgan also had other convictions, another for aggravated assault and one for burglary of an automobile.