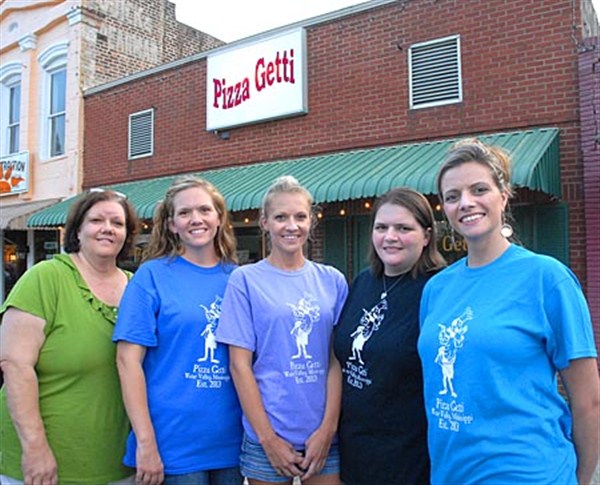 Bill Rotenberry’s wife, Peggy, and four daughters; Amy Olsen, Katie Rotenberry, Leslie Rotenberry and India Hale, have taken over his Pizza Getti Restaurant on Main Street and will continue to run it just the way he would have wanted. – Photo by Jack Gurner 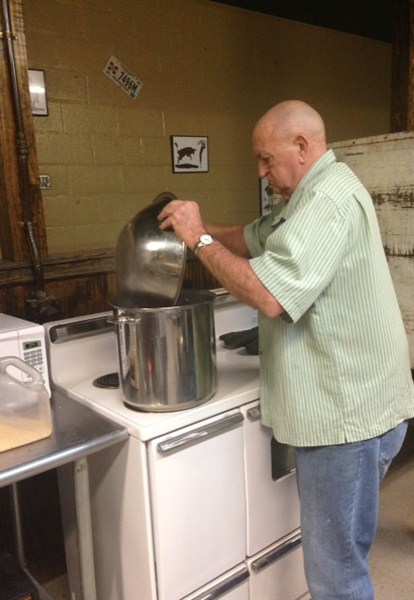 The late Bill Rotenberry got his interest in cooking from his mother, who was a well-known cook. He is shown cooking on his mother’s stove, which the family dubbed Eula Mae in her honor. He passed away in April and his daughters continue to operate his Main Street restaurant. 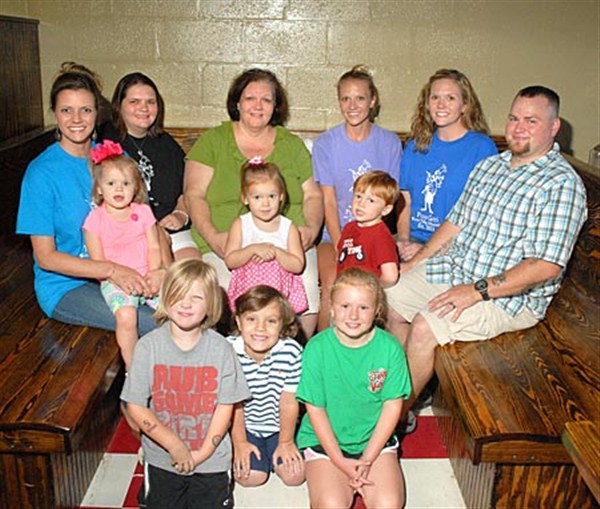 Mom, Peggy, the four daughters, Amy’s husband, Erik, and a collection of the grandkids.


WATER VALLEY – Bill Rotenberry would be just as proud of his daughters as they are of him.
The four girls and their Mom, Peggy, have taken over his Pizza Getti Restaurant on Main Street and continue to run it in just the way he would have wanted.
Rotenberry passed away Friday night, April 12, doing what he loved – working in his restaurant.
“Dad taught us how to make everything,” said Katie Rotenberry, who the sisters describe as being “in charge.”
“We’re serving something to the public that he taught us to make that he loved so much and meant so much to him,” she continued. “It makes you feel like he’s still here. This is his restaurant and all the recipes are his.”
Katie emphasized that she and her sisters never had a strong desire to run a restaurant. “We all just have a really strong desire to carry on his name and make him proud.”
“It’s taken a lot of work and sacrifice from all of us. There are times we work here until eleven o’clock making sauce,” she added. “We’re all kind of going full speed…jobs, this (restaurant) and we have kids.”
“But, anytime you get someone who comes up and says, ‘This place is great. Your dad would be proud,’ it really makes the hard work and the struggle worth it,” said Katie.
All of the sisters have a roll in running the business. Katie – the bossiest and the meanest, according to her mom – does most of the ordering, a lot of the cooking, handles staff and does payroll. India Rotenberry Hale describes herself as the customer service person who loves talking to customers. Amy Rotenberry Olsen, a former military policemen who served in Iraq, said she walks behind the employees and makes sure everything is being done and done right. And, Leslie Rotenberry, who describes herself as the ‘sweetheart,’ takes up for the employees.
“If we could combine into one person, we’d be awesome,” Katie said about the sisters’ managerial skills.
They got an early start learning the restaurant business. “My dad has always had restaurants and we always worked really well together in them,” Katie explained. “My dad raised us to help each other out and to be there for each other.”
Their mom, Peggy, said that the girls started out washing dishes. Their dad wouldn’t let them wait tables until they did well at their other jobs. If they did, they could waitress when they were around 15.
“We used to tease my dad that he had us in the back, slaving away, and he was out here making the rounds hobnobbing with the customers,” said Katie.
“Most of us are dad’s kids,” Katie commented on her father’s strong work ethic. “You get up in the morning, you hit the floor and you don’t stop until you lie down in bed. That’s him coming out in us.”
One thing that the sister’s don’t share with their dad is his perceived “grumpy old man” persona. “Oh my gosh, he had reached the age where the rules of society – the games you have to play – didn’t apply,” said Katie. “People were just supposed to understand that he was a grumpy old man and it was everyone else’s fault and we were just supposed to accept it.”
“I said, ‘No, Dad. They don’t have to accept it, they can arrest you,” she added. “I think people would be surprised to hear he really liked people.”
Bill got his interest in cooking from his mother, who was a well-know cook, according to the sisters. In her honor, he moved her original stove from the farmhouse in Oakland into the restaurant. “I didn’t know what was special about it, it was just Meemaw’s stove,” Katie said. “He had it brought here and we’ve been cooking on it. They call it “Eula Mae,” that was my grandma’s name.”
Recently, on a Sunday morning, as the staff prepared for the buffet, someone accidentally spilled water into the back of the stove. “There was this huge explosion. I could have been killed,” Katie said. “Dad would be devastated.”
The sisters hope to repair the stove and return it to service in the kitchen.
Even through the restaurant is a lot of hard work and responsibility; Katie said that she would like to keep Pizza Getti open as long as the family can. “I think it is therapeutic for me. Having this kind of helps fill the spot that he left.”
Pizza Getti is open from 4:30 p.m. until 9 p.m. Wednesday through Friday and the weekend lunch Buffet is 11 a.m. until 2 p.m. both Saturday and Sunday.