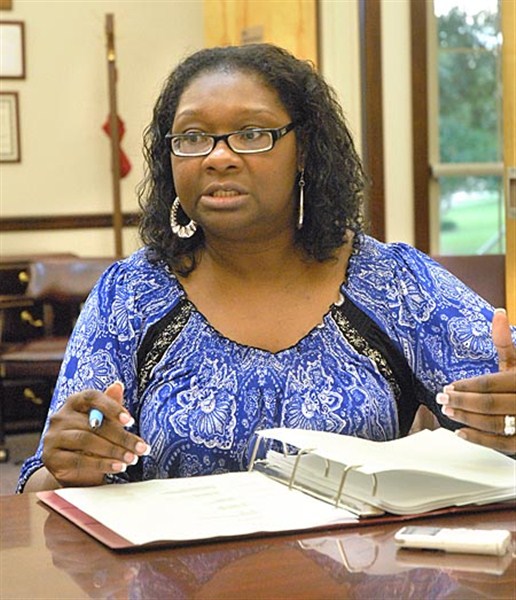 Dr. Carol Gary presented the changes in the elementary school handbook. She replaces Chester Drewery as the principal. 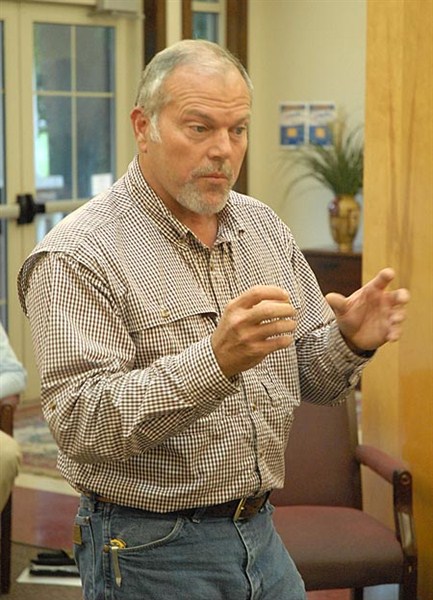 Leo Wood, senior project manager for Broaddus and Associates, explained the grant procedure for getting funds to build a multipurpose shelter at Davidson Elementary School. The building will be similar to the one being built at Smithville (below.) 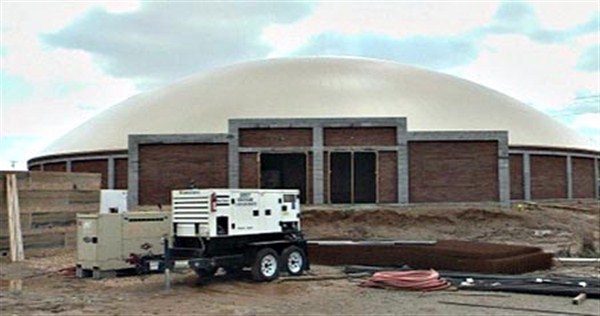 
WATER VALLEY – A dome-style shelter capable of withstanding  strong tornados will be constructed at Davidson Elementary School if FEMA approves the school district’s application.
School board trustees voted Monday night to authorize Leo Wood, senior project manager for Broad-dus and Associates, to begin the application process to build the structure.
The multi-purpose shelter will not only provide protection for students, staff and members of the community living near the school in the event of a tornado, it will also serve as a physical education facility. It will be similar to the one being constructed as a gymnasium and shelter at the Smithville High School, which was destroyed by an EF-5 tornado in April 2011.
Wood said that federal money is available under the Hazard Mitigation Grant Program, which is funded after every major disaster based on the total damages. Currently there is still money available from Katrina.
He explained that the size of the facility is determined by the number of students and staff at the school and the population within a half-mile radius. “They use a .5-mile radius because normally when a tornado siren goes off you have 19 to 22 minutes to respond and take shelter.”
Anyone can use the shelter, but those within that distance are the most likely to reach the shelter in time.
Wood added that there were only two weeks left to submit the pre-application. “They want it turned in by the fifth of August.”
The grant would pay about 90 percent of the construction cost with the school district providing about ten percent of the money. Wood has filed applications for more than 25 shelter projects and all have been approved.
Wood estimated that it would probably take from 18 months to two years for the project to move through the federal bureaucracy.
Among other actions at the July 22 meeting, trustees:
• Approved the redistricting plan as advertised and presented at two public hearings.
• Tabled the performance based compensation plan for additional research.
• Approved the interagency memorandum of agreement between the school district and the Yalobusha County Sheriff’s Department.
• Agreed to changes in the high school student handbook.
Among the changes is clarification of the dress code regarding patches and holes in clothing, none of which will be allowed.
• Approved changes in the athletic hand book.
• Approved changes in the Davidson Elementary School handbook as presented by Dr. Carol Gary, new principal of Davidson Elementary School.
• Voted to approve the faculty and staff handbook, which includes a table of contents for the first time.
• Approved the safety and crisis response plan, a 164-page document required by the state that has grown over the years as the dangers to students have increased.
Trustee Pierce Epes asked if the document could actually be used in a crisis because of its length. “The emergency is going to be over by the time you find it in this plan.”
Superintendent Kim Chrestman nodded agreement and said, “The bureaucracy that they are placing school districts under is unbelievable. We’re going to have to hire people to do all these things that they are telling us we are going to have to do besides teach school.”
Epes made a motion to accept the plan “even though it is ridiculously thick.”
• Paid Claims and heard a financial report from District Business Manager Randy Goodwin. He said that the end of the fiscal year district maintenance fund balance is $1,785,479.45.