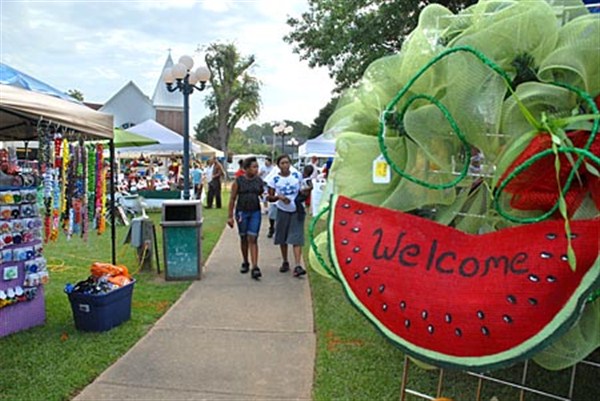 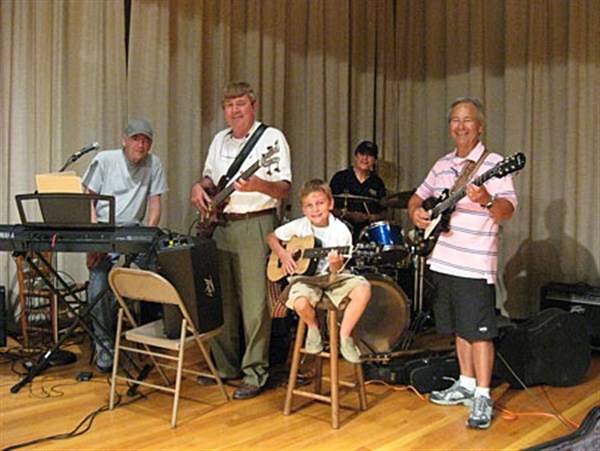 
WATER VALLEY – It’s that time of year again. For the 44th time in the city’s history, the watermelon will be celebrated.
Thousands will gather at City Park and all around town to participate in activities that range from a walk/run to class reunions, all set to a musical beat provided by day long entertainment from the park gazebo.
Activities kick off Thursday night with the Watermelon Carnival Music Festival sponsored by the Town and County Garden Club. The annual musical treat will feature the Sharecroppers, known affectionately as Yalobusha’s house band, as the opener. Watermelon Queen Carrie Carlisle will also be presented.
Talented performers will include singer Jacob King, the band Whiskey Joe and the Bottom Dollars, vocalist Coulter Clement, Mad Kat made up of sisters Madison and Katie Williams, and the Worship Team from First Baptist Church. A few tickets were still available at press time at Turnage Drug Store and the Chamber of Commerce office as well as from club members.
Friday will feature all day shopping at City Park, which sponsors promise will feature more arts and crafts and less foreign made products this year. Food vendors will be offering a wide range of festival and carnival style food items to tempt the taste buds.
Singer Jacob King will provide music from the gazebo from 4 until 6 p.m. when opening ceremonies begin. Water Valley Mayor Larry Hart will welcome carnival attendees and the Community Band will play the National Anthem and then continue their performance until 7:30.
The street dance sponsored by Renasant Bank will get underway at 8 p.m. and break for the 9 p.m. Mechanics Bank fireworks show.
Saturday morning activities start early with the 26th annual 3K run/walk at 7:30 a.m. sponsored by Mechanics Bank and the 18th annual car display in Shuffield Park at 8 a.m.
At 9 a.m. music begins at City Park with Tom Foolery on the gazebo.
The air conditioned trolley begins its runs between City Park and downtown at 10 a.m. so that visitors can get a taste of downtown shops, boutiques and restaurants. They can also get a taste of the specially brewed root beer during the tour of Yalobusha Brewing Company. Plus they can visit the Water Valley Casey Jones Railroad Museum.
At 11 a.m. the watermelon games begin at the Renasant Bank parking lot followed by the largest melon contest at noon. The Lions Club will hold a prize drawing at 12:15 and Water Valley athletics will be presented at 12:30.
Ice cold watermelon slices will be served at the south end of the park beginning at 1 p.m. and music will resume from the gazebo at 1:30 with Eric Allred and Dr. G. R. Orndorff.
The Ellis family will take center stage at 2:30 followed by Drew Logan at 3. At 4:30 the Pickup Porkers Barbecue winners will be announced.

By Lucia Holloway
Special To The Herald


WATER VALLEY– Hometown talent will dominate the line-up of the 20th Watermelon Music Festival on Thursday night at the Civic Auditorium, kicking of with music by The Sharecroppers at 6:30.
“Musicians and vocalists donate their talents and time to the event and are the backbone of our financial success, allowing our club to continue with our community beautification projects,” said Zandra Walker, club president. The recent planting of shrubs and flowers at the base of the Gardiner Industrial Park is an example of The Town and Country Garden Club’s dedication to adding curb appeal to Water Valley sites.
The Sharecroppers hold the record for most appearances at the music fest. The newest member of the band, organized over 10 years ago, is Brian Ward, studio engineer for an Oxford recording studio and active in the Parchman Prison Ministry.
Other members are Dr. Jessey Higdon, Dr. Larry Tyler, Daryl Burney, and Clay Ashford. The band will appear at Ground Zero Club in Clarksdale on August 24. “The group plays a variety of musical styles, including country pop and gospel, blues, and old Jazz standards,” said Clay Ashford.         “Each musician has a specific area of expertise that contributes to our blend of music.” The band has appeared at the Drom Club in East Village in New York City.
“First-time Music Fest emcee Jerry Helms will keep acts on pace with his quick wit and humorous quibs,” added Jonnie Mayo, co-chairman of the festival.
Helms, along with his wife, Mary, joined the ministry staff of Reedy Acres in 2001. Presently, he is Sunday School Director at First Baptist Church. Earlier, he was an insurance agent serving as Regional Agency Director and President of both the Mississippi Association of Life Underwriters and  Mid-Delta Associa-tion  of Life Underwriters.
In addition, he is past president of the Greenville Optimist Club. The Helms have two children, Joey, who lives with his wife, Sara, and son, Wilson, in Tunica, and daughter, Brandi, married to U.S. Army Chaplain, Kirk Kay of Fort Hood, Texas, and children, Jeremiah, Kirklyn, and Kristen.