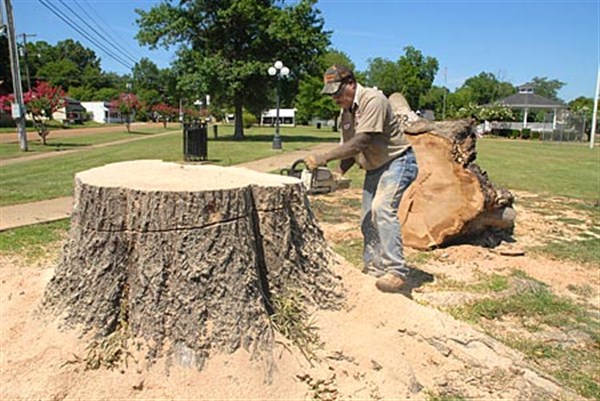 Robert Walker of the electric departments evens up the stump as a sitting place for carnival. 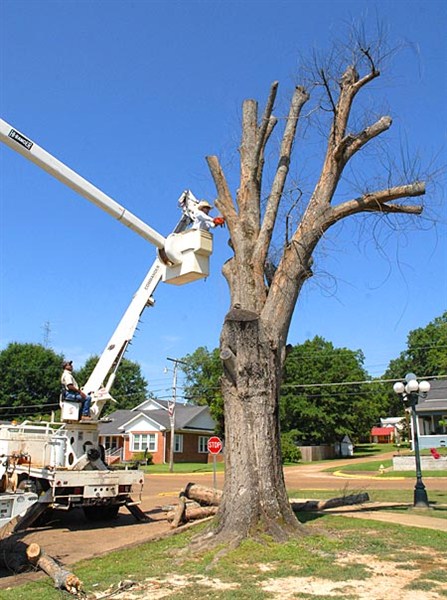 Walker (seated on pole setter) lowered limbs to the ground while Andy Hall (also in photo below) cut them. 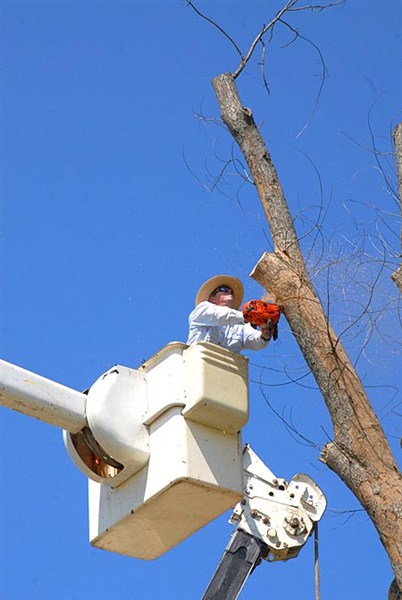 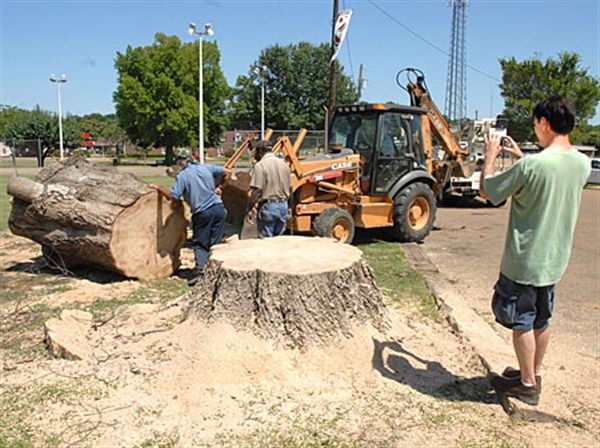 
WATER VALLEY – The city lost an old friend Monday.
The last of the old oak trees that stood for so long in City Park was cut down. It was the victim of a tornado, two ice storms and the ravages of time.
City officials made the decision late last week after attempts to save the tree were unsuccessful.
Those of us old enough to remember the way the park looked “back then” hated to see the tree go. It wasn’t particularly pretty. In fact, it had become scraggly and bare. But, it wasn’t so much the tree itself, it was what it represented.
For me, it brought back memories of splashing in the cold water of the wading pool that once occupied the northwest side of the park. I remember sitting on the edge of the pool with my toes just touching the water until I worked up the nerve to wade into the icy shower provided by the fountain in the center.
Later, when I was old enough to play in the park after dark, I can recall chasing lightning bugs that were bigger and more plentiful than anywhere else in town.
The park was also very much a part of my childhood’s end as my fellow sixth grade students and I celebrated the finale of our elementary school days with a picnic there.
For several years after I snubbed the park, choosing instead to ride my bike passed the line of catalpa trees that bordered the block toward more “big kid” adventures downtown. Movie matinees featuring beach bunnies dancing to rock and roll had gained my attention on Saturday afternoons.
As an older teen, I would  attend the Jaycee political rallies. The smell of 25-cent hamburgers was much more of an attraction than anything spouted from the old concrete gazebo.
As I grew, so did the trees in the park. It’s not the kind of thing you notice, but an oak can grow a lot in just 25 years or so.
By the time the first of the new Watermelon Carnivals were held in the early 80’s, the park had some beautiful towering oaks.
And then, on an April day in 1984, they were gone.
Not all of them thankfully. The tree on the corner was one of the exceptions. He was younger then and better able to stand up to the tornado’s wind. So, there he stood for another 30 years.
But, there are still trees in the park. They may be young and not as tall, but they will grow. Just as another generation of youngsters will grow and create their own special memories of the park and their hometown.
For them it may be the sticky sweetness of watermelon juice running down their chin or the fireworks filling the air. But, they are memories that will last a lifetime.