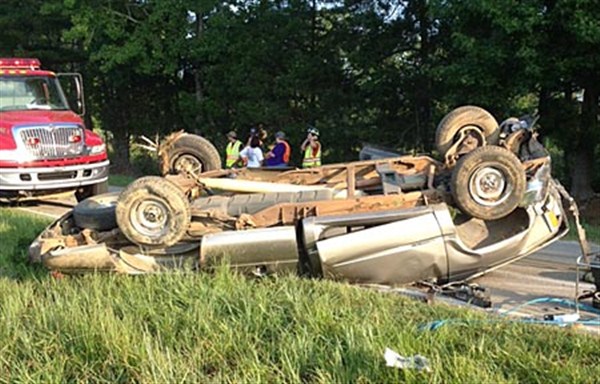 Quaterius Jones was killed last Thursday morning in a one-vehicle accident on Hwy. 32.


A Water Valley man was killed last Thursday morning in a one-vehicle accident on Hwy. 32, east of town. Quaterius Jones, 20, was killed according to Yalobusha Coroner Ronnie Stark. He lived on Lafayette Street.
Sheriff Lance Hum-phreys reported that the 911 call came in around 6:30 a.m. While the Mississippi Highway Patrol worked the accident, deputies assisted with diverting traffic after the road was closed for almost two hours. Firefighters from Pine Valley Fire Department and the county rescue unit also responded.
Humphreys said reports  from the scene indicated Jones was coming home after working a night shift in Bruce when he lost control of his vehicle.
In other law enforcement news:
• Woodrow King was charged with aggravated assault after he allegedly shot a man in the stomach with a .22 caliber rifle Saturday night.
Humphreys said King and Dan Beeler had been arguing outside a residence  on County Road 94 around 11:30 p.m. King went inside the home and got the rifle and fired the shot. Beeler was airlifted to Tupelo for medical treatment.
Humphreys said alcohol was likely a contributing factor in the shooting.
Justice  Court Judge Gary Tippit set a $15,000 bond for King during an initial appearance Monday afternoon.
• Humphreys warned that multiple Yalobusha County residents received phone calls from someone impersonating a law enforcement officer wanting money for “unpaid” fines.
The calls started Monday morning and Humphreys said the scammers were likely concentrating on the area.
In the first report received Monday, Humphreys said the scammer impersonated a DEA agent.
“He claimed the victim was part of an ongoing investigation, but said the matter could be cleared if they paid a  fine,” Humphreys told the Herald.
In a second call reported, the sheriff said the caller said he was working for the Pontotoc Sheriff’s Department and was seeking payment for fine.
“Both of the calls were bogus and I am sure other residents received similar calls that were not reported to authorities,” Humphreys added.
While scammers are always at work, Humphreys said someone impersonating a law enforcement officer could get a stronger reaction, especially from an elderly person.
“Please spread the word, especially if you are older parents, neighbors or friends to never, never send money after receiving a threatening a phone call,” the sheriff advised.
Instead, immediately contact the sheriff’s department at 473-2722.