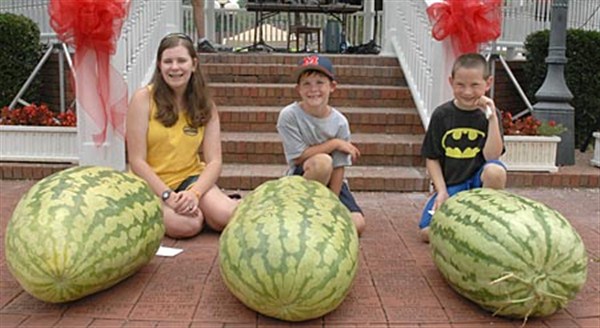 
WATER VALLEY–The temperature was down and the participation was up in Water Valley’s 44th Annual Watermelon Carnival last weekend.
In fact, Chamber President Tyler Hill reported several folks commented that it was the largest crowd in recent years.
The chamber registered 138 arts and crafts venders in the park, up from just over 100 last year. The annual Mechanics Bank 3K run/walk attracted 183 participants, up from 122 last year.
The cloud cover that kept the temperature in the upper 80s until early afternoon was likely a contributing factor.
“The Lord blessed us with a good day,” Hill said.
But, chamber  organizers promoted the carnival in different venues including social media this year with hopes to reach different people and stretch their advertising budget.
“I talked to one couple from Oxford who had lived in the area several years and said they had never even heard of the carnival before this year,” Hill said.
“We appreciate everyone’s support and participation. This is a tremendous investment,” Hill said. In fact, that investment topped $20,000, counting the chamber’s spending plus funding from event sponsors.
Orderly Crowd
While the streets were packed, especially during the street dance Friday night, Water Valley Police Chief Mike King reported that the crowd was orderly. King said his department only responded to two minor altercations.
“One was a vender on vender fight,” King reported. The second involved two minors and charges were not pressed in either disturbance.
The only problems were open containers, triggering several citations.

A Case Of Mistaken House
While the food, entertainment and visiting was superb, the best watermelon carnival tale of the weekend happened outside the park and did not involve the police department or bodily harm.
But it could have.
The instructions seemed easy enough for out-of-town guests Tom and Amy Tyler Brawswell. Come to the house, the door would be open, pet the dog and head on upstairs and make yourself at home. They were visiting Water Valley for Amy’s 45th  class reunion, the class of 1968.
They planned to stay with Amy’s first cousin, Nell Jobe, who provided the instructions.
“I told them I was living in my mom’s house. She is deceased,” Jobe explained.
It turns out that Amy remembered visiting another home Jobe’s mom lived in over 25 years ago, a home now occupied by Rex Howell and Denise Sunderland.
When they arrived home  Saturday morning around 1:30 a.m. after enjoying the carnival they noticed an unfamiliar car in the driveway with Tennessee tags
Actually Denise had made it home ahead of Rex.
“She took a knife with her in the house, she wasn’t sure whose car it was,” Rex said, retelling a story that has already made the rounds across town numerous times.
Everything seemed fine inside and they speculated that the car may belong to a friend of the kids.
“Then we thought we better check and see if the kids are home,” Rex continued. He checked the bedrooms and decided he better look upstairs too.
“I got to the bedroom and there were two people in there,” Rex explained.
He cut the light on and a man raised up.
“I cut the light back off,” Rex said.
“How are y’all doing?” was the first question Rex asked.
Next was, “Who the hell are you?” he added.
“Neal’s cousin,” was the answer, or at least that’s what Rex thought he heard.
“Who the hell is Neal?” was the next question.
It took a few minutes, but they sorted out the details–the couple had intended to crash in Nell Jobe’s second story bedroom.
Rex hated to relocated them in the middle of the morning, especially after they had lugged their luggage upstairs.
“We tried to get them to stay, but I think they were too embarrassed,” Rex explained.
The couple relocated to Jobe’s home, where she had left the light on after they didn’t show.
“She remembered visiting my mom at that home. The driveways were also similar,” Jobe said about the case of the mistaken homes.
By the next day the story had circulated ahead of the couple as they enjoyed the carnival.
“Tom asked who he needed to bribe to keep it out of the newspaper,” Jobe said. “I think he had a good time with it.”
Amy’s class members also took it in stride, Jobe told the Herald. They even made a special name tag, “Goldilocks,” for the reunion.
“It would have been even funnier if we had not checked it out and they had showed up the next morning for breakfast,” Rex added.