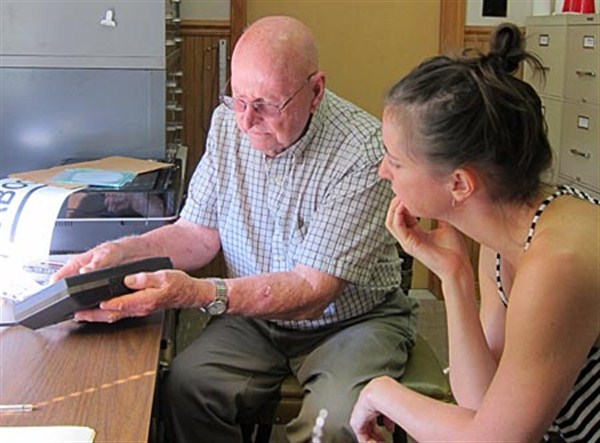 
WATER VALLEY – The chugs, whistles and ringing bells that were once part of everyday life will again fill the air more than 30 years since the last train passed through town.
The sounds of railroading are part of the art installation, “Waiting,” by Brooklyn, New York artist Andrea Ray that will open this Friday at Yalo Studio and Gallery.
Ray’s installation is the second collaboration between Yalo Studio co-owner Coulter Fussell and New York resident and former Memphian Mary Lapides, whose family owns a tree farm near Coffeeville.
She and her family visit the farm during the summer and have established the Lapides/Pinehurst Artist Residency program during which an artist will spend time among the pines.
Last year Zeffery Thro-well came to Yalobusha County, spent two weeks with Lapides and her family and came up with “Everyday Awards,” an art show that honored 15 mostly ordinary folks from the area.
This year’s project recognizes Water Valley’s railroad heritage, according to Ray, by pulling up history and also referencing the present day.
She developed the idea for the railroad themed installation while doing a site visit earlier. “I love going to a place and looking at it, meeting people and learning about the history and letting that sort of feed the ideas for the project,” Ray said.
For the show, Yalo Studio will be transformed into a passenger waiting room, according to Fussell. “Andrea will bring back to life the old sounds of the railroad in Water Valley. She’ll turn Yalo Studio into a train depot waiting room and the sounds of old steam engines from Water Valley will be heard down on Main Street once again. This is a piece about waiting, love, and heat. We certainly don’t lack for any of that in north Mississippi,” she said.
The artist researched railroad timetables and schedules and train sounds with the help of Water Valley Casey Jones Railroad Museum Curator Jack Gurner, Sr.
Ray said that she is excited about having a piece that operates in different places, yet with each other. “The sounds of the train are out here,” she said, pointing toward the park. “Anybody just going around in Water Valley will hear it. They don’t necessarily have to come find the piece, it is just going to be there.”
But, she emphasized the importance of having people participate in the installation by coming to Yalo and sitting on the benches as if they were lingering with the character in the story that is part of the piece.
“The work isn’t done until I’ve got people in them,” Ray said. “It’s not like a painting that can just sit on the wall. I really rely on having people come an engaging in the work for it to come alive.”
“Waiting” opens this Friday, Aug. 9, with a reception from 6 p.m. until 8:30 p.m. at Yalo Studio and Gallery at 303 North Main Street. The reception is open to the public and everyone is invited to come, said Fussell.
Train sounds will be heard on Main Street as part of the show, which will run through Sept. 7. Studio hours are Tuesday through Saturday from 12 p.m. until 5 p.m.
More detailed information about the artist and her work is available at www.yalostudio.com.