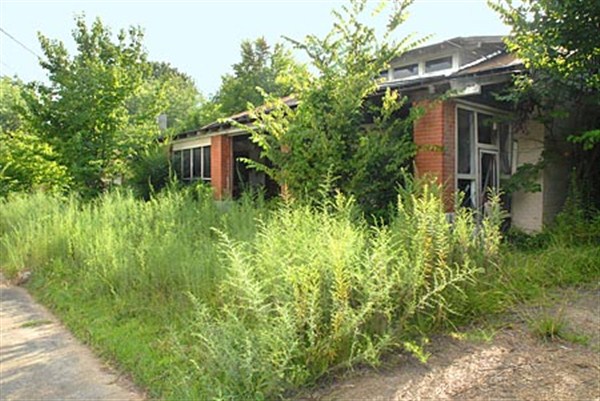 This property in need of attention at 1301 North Main Street was the topic of conversation at the August meeting of the Board of Aldermen and for some visitors to the city during the recent Watermelon Carnival. “That’s the one people really see,” commented Alderman Donald Gray. – Photo by Jack Gurner 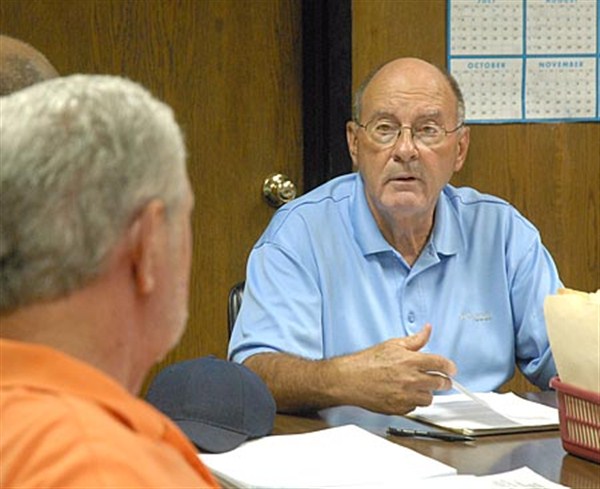 Mayor Larry Hart read from the city ordinance and explained his policy of using diplomacy when dealing with neglected property.


WATER VALLEY – The city’s extensive clean up for this year’s Watermelon Carnival may have focused more attention on several neglected properties scattered around town.
Alderman Bobby Cox brought up the subject during the August “first Tuesday” meeting of the board as he thanked city workers, civic clubs and organizations and the citizens for their efforts in cleaning up for the yearly event.
“I’ve heard nothing but positive comments about the town and about its people,” Cox said. “And, I think due to our very excellent clean up, it did draw attention to some properties that perhaps did not get the proper care needed. I had some concerned citizens ask me some questions that I could not answer.”
Cox added that he told those concerned that he would bring their questions to the board meeting for input from the Mayor and City Attorney.
Cox said that he was asked what could the city do to address some neglected property in town with problems such as high grass and weeks, debris around homes, abandoned cars, and litter in general. “I think their main question to me was, does the city of Water Valley have any codes, laws or whatever to address those type issues and if we do, who would enforce these codes or laws.”
Cox noted that he suggested that those concerned come to the board meeting, but they did not.
Mayor Larry Hart explained that Police Chief Mike King is the code enforcer. “We do have an ordinance that addresses everything you mentioned,” he said. “And we have been using this ordinance in a limited fashion but a workable fashion.”
The mayor continued that he believed in using diplomacy first. “That’s the best way to go when you can. But, sometimes you can’t.”
He then read a section of the lengthy ordinance, adopted ten years ago, that described violations and punishments. Violators can be fined up to $500 and imprisoned for up to 90 days for each day that the property is not in compliance.
“Here’s the real teeth,” Mayor Hart commented as he read the section that allows the city to “do all things necessary” to bring the property into compliance. Under Mississippi Code the owner or occupant will be liable for all costs and expense incurred by the city.
The Mayor described a recent situation that required contacting a property owner on Airways Drive about garbage blowing around the neighborhood from a broken sack and other problems. He said that the owner agreed to clean up the property by the next morning and when he drove by it was done.
“That’s the way I believe is the best way to handle these things,” he said. “I find that a lot of people will work with you.”
“To answer your question, Bobby, we are doing work in this area right now,” said the Mayor. “One of my goals for us in this term is to do a lot more.”
Alderman Larry Bell commented that many of the property owners appear to be out-of-towners. He suggested that they be contacted and told they would be responsible for paying to have their grass cut or property cleaned up.
Mayor Hart responded that the only way to legally make the property owner comply is through the ordinance.
Aldermen briefly discussed one of the most prominent properties located at 1301 North Main Street. “That’s the one that people really see,” said Aldermen Donald Gray.
Cox emphasized that derelict property was not just a Water Valley problem. He said that he had seen references to similar situations in Oxford, New Albany and Tupelo.