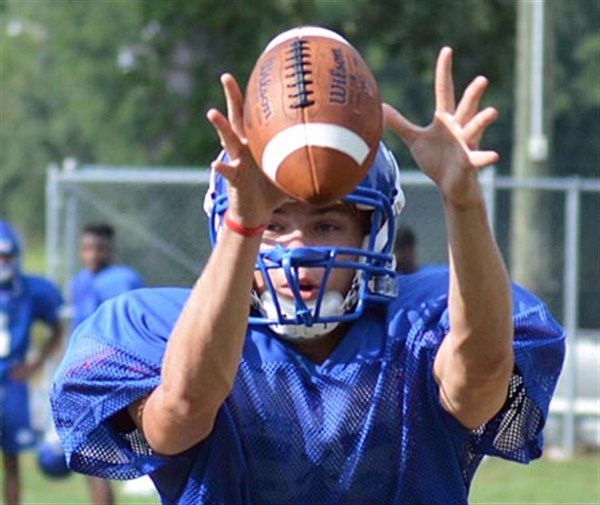 
WATER VALLEY – The 2013 football season gets underway Friday night with the annual “Meet The Blue Devils.”
The action starts at 6 p.m. as the football players, cheerleaders and band members are introduced.
“We hope everyone will come out, see the kids and have a good time,” Coach Brad Embry reports.
There is no admission and the band boosters will offer concessions.
The action will intensify the next day, Saturday, as the Blue Devils travel to Ole Miss to face the Philadelphia Tornadoes in a three-quarter scrimmage game as part of jamboree action at the Vaught-Hemingway Stadium.
Embry reports the scrimmage game gets underway at 7 p.m., and both varsity and junior varsity athletes will see playing time.
“It will be a controlled scrimmage, there won’t be a lot of special teams,” Embry said. “We will focus on getting film on all the kids and work on some of our weaknesses.”
The Blue Devils open the first game of the season next Friday, Aug. 23 in the Classic Game against New Albany

Growing Pains
Embry has also been juggling work off the field in the weeks leading up to the season, assisting the football boosters and other volunteers on a field house addition.
The expansion was necessitated by a growing Blue Devil squad, up to more than 70 players this year. The existing field house only has around 50 lockers, creating growing pains for Embry’s squad.
When the concrete is poured and landscaping, Embry expects to put the project on hold until after the season.
“We raised enough money for the slab, but we are still looking at different ways to help fund this project,” Embry added.
The funding is needed to install a metal building, lockers and an air-conditioning unit.
Embry has cited the strong community support as a huge factor in the success of the Blue Devils. He also cites the field house addition  as an important step in building one of the strongest 3A programs in the state.
Anyone interested in helping with the project can contact athletic director Trey Allman or Coach Embry.

All Sports Season Passes On Sale


All sports passes are now on sale for the 2013-2014 school year. The passes cost $65 and covers all home athletic contests with the exception of playoff games, which are managed by the Mississippi High School Activities Association.
This pass takes you from the first serve in volleyball to the final out in baseball. Get your All Sports Pass and enjoy Blue Devil sports throughout the year. Passes can be purchased at Water Valley High School from 9 a.m. to 11:30 a.m. and 1 p.m.-2:30 p.m. Monday through Thursday, beginning Tuesday, August 13.
The final day to purchase a pass is Thursday, September 5.