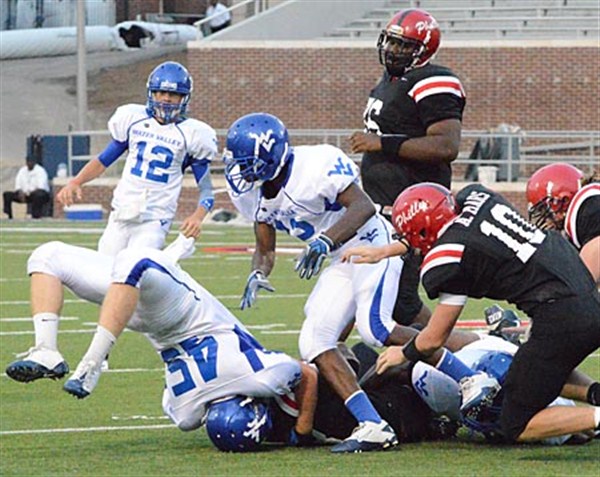 Dillon Zinn (45) gets upended after making a tackle in last Saturday’s jamboree against the Philadelphia Tornadoes. The Blue Devils will face New Albany Friday night at Kitchen Field in New Albany. – Photo by Claudia and Mark Anthony


NEW ALBANY– The Blue Devils will face New Albany in the sixth game in the two schools’ history as the 2013 campaign gets underway Friday night at Kitchen Field in New Albany.
The Blue Devils actually opened up the 2013 season and the sixth year under direction of Coach Brad Embry last Friday with “Meet The Blue Devils” on the Bobby Clark Football Field.
Activities continued last Saturday during a jamboree against the Philadelphia Tornadoes at the Vaught-Hemingway Stadium at Ole Miss.
During the three 20-minute quarters that included varsity and junior-varsity play, the Blue Devils found the end zone first during an 11-play opening drive. However that would be their only score and the Tornadoes would score three touchdowns to record a 20-7 win.
One of the Tornadoes’ scores came on an interception, which was returned for six. The second and third scores came late in the game, which also including playing time for Embry’s junior varsity players.
The season comes with high hopes for the Blue Devils as almost a dozen starters including four-year starting quarterback E.J. Bounds as Embry works to build a powerful 3A team and has experienced “good results” during the last three seasons.
In 2010, Embry led the Blue Devils to an 11-win season that ended in the third round of the playoffs against Winona. In 2011, the Blue Devils recorded another 11-win season, but again fell in the third round of playoff action against an undefeated Cleveland Eastside team.
Last year, the Blue Devils lost again to an undefeated Eastside Team, this time in the second round of playoffs.
“That’s good,” Embry told the Herald during pre-season practice. “But good is the enemy of great.”
Kickoff Friday night is set for 7 p.m.


The Water Valley School District is tightening the perimeter around the Bobby Clark Football Field to  keep the environment as safe as possible for fans, players and officials.
Athletic Director Trea Allman reported that new fencing is being installed to control the crowd flow. Allman explained that while the entrances will be the same this year, fans that enter on the visitors’ side will  not be able to cross over to the home side. The same goes for fans entering the home side entrance.
“Basically we are going to cut down the area that we will have to supervise,” Allman explained.
The fencing work is underway now and will be ready for the first home game, scheduled August 30 against Coffeeville.
Allman also said fan access will be limited to the field house until a designated time after the game.