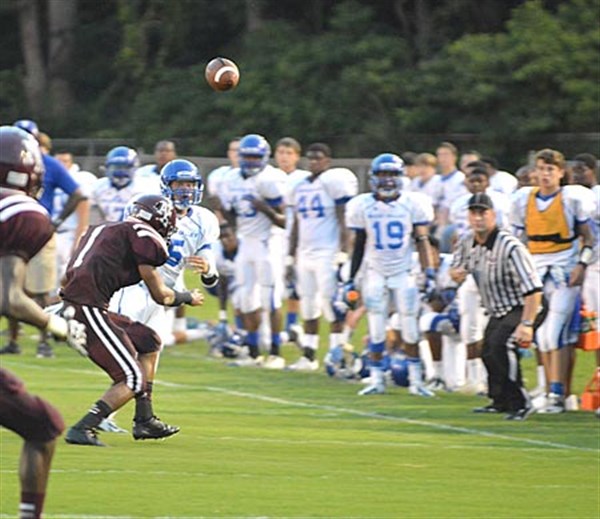 Blue Devil quarterback E. J. Bounds completed seven of 11 passes in Friday’s opening game victory over New Albany, 38-13. Water Valley plays Coffeeville at home in the Railroad Classic Friday. The Blue Devil’s football games are now broadcast live on the Internet by Supertalk Mississippi for fans who may live outside the station’s coverage area. To listen go on Supertalk.FM website and select station WTNM, North Ms and click on the link. 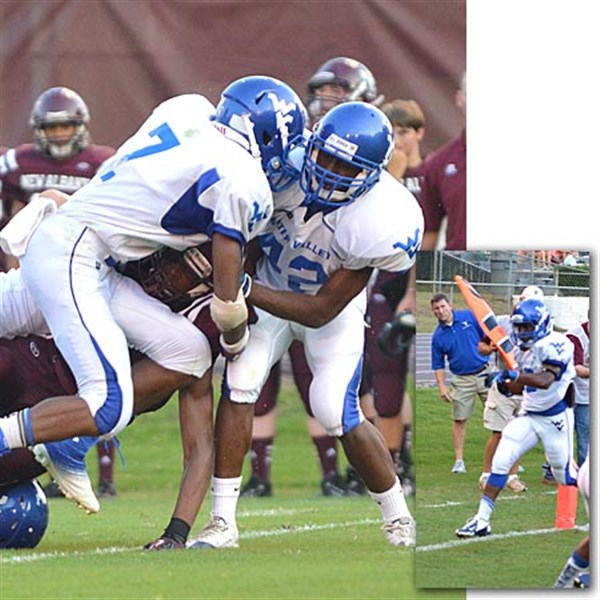 Quintez Holmes (right in photo on theleft ) and Kirkland Horton combine for the stop in Water Valley’s opening game against New Albany. James Washington (right photo) crosses the goal line for the first touchdown of the season. The Blue Devils won, 38-13. – Photos by Mark Anthony 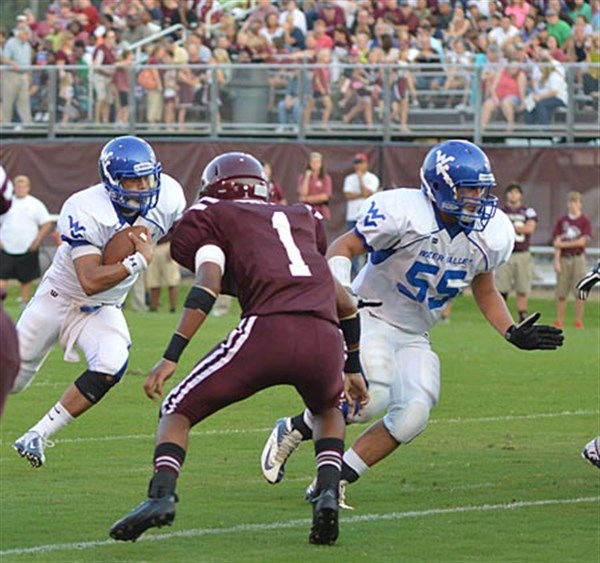 Senior quarterback E.J. Bounds rushed for 57 yards during the season-opener.


NEW ALBANY–For the fourth consecutive season, the Water Valley Blue Devils (1-0) opened their campaign with a resounding win.  This year it came with a solid early-season performances on both sides of the ball as coach Brad Embry’s boys cruised to a 38-13 victory over the larger 4A class New Albany Bulldog.
“We played hard and fast,” Embry said about Friday’s win.
Senior quarterback E.J. Bounds connected in the air on seven of 11 attempts, including three for touchdowns. Bounds’ three touchdown passes went to three different receivers, senior James Washington, and juniors Trey Alexander and Derrick Gooch.
On the ground junior Elijah Rogers led his team in rushing with 13 carries for 90 yards that accounted for both touchdowns on the ground. Bounds ran for 57 yards on the ground in a dozen carries, and senior player K.J. Lee recorded 33 yards in six carries.
Junior kicker Alex Robles had a perfect night, kicking five extra points and connecting on one field goal.

Getting Underway
Water Valley’s defense set the tone for the contest during the Bulldog’s opening drive after standing strong on a fourth down and 1 from the Bulldog’s eight-yard line.
After the takeover on downs, the  Blue Devils offense also showed their stuff, grinding out 89 yards that culminated with an eight yard touchdown  pass from Bounds to Washington to take an early seven-point lead.
It would only take the Bulldogs three plays to answer after starting from their own 31 yard-line. In two plays, the Bulldogs were backed up six yards when blown pass coverage opened the field for Bulldog receiver Jimmy Baldon to go 75 yards on a pass play for the score.  An extra point tied the game at seven.
The Blue Devils went three-and-out on the next series, setting up the Bulldogs on their own 36 yard line after the punt.
The Bulldogs again failed to convert at the start of the second quarter after the Blue Devil defense stood strong, forcing the second turnover on downs in the game and setting up the second successful drive in the game for the Blue Devils.
This time Alexander capped off a 12-play drive, scoring on a 10-yard pass play putting the Blue Devils up 14-7 with 7:32 remaining in the half.
After both teams went three-and-out in the successive drives, the Bulldogs were looking to even the score when sophomore  Kirkland Horton came up with a big interception with three and-a-half minutes remaining in the half.
The Blue Devils then marched 51 yards in five plays that included a 25 yard touchdown from Rogers that put the Blue Devils up 21-7 with 1:38 remaining in the half.

Second Half
In the kickoff to open the second half, senior Robert Mays scrambled 67 yards to set up the Blue Devils opening drive on their own 28 yard-line. Rogers would waste no time taking advantage of the excellent field position, running in for a touchdown on the next play after a big block from Bounds to put the Blue Devils on the scoreboard again with only 25 seconds off the clock.
After both teams were forced to punt in the consecutive possessions, the Blue Devils’ next score came after a fumble recovery that set the offensive up on the Bulldogs’ 13 yard line.
This score would come from Robles, who connected for a 26-yard field goal after the Bulldog defense stood strong on third and six. The perfect kick put the  Blue Devils up 31-7 with 3:35 remaining.
Water Valley connected with their fifth touchdown of the night early in the fourth quarter, when Gooch scored on a 28-yard catch and run.
With Embry rotating starters off the field late in the game, the Bulldogs scored their second touchdown of the night on a five-yard run into the endzone with less than a minute remaining, making the final score 38-13.
Water Valley will now turn their attention to local rivals Coffeeville, who dropped their season opener 45-6 to Calhoun City last Friday.
The Devils will be going after their fourth straight Railroad Trophy.
“They are very athletic and with the county rivalry, we better get ready to play or we will be sad for a year,” Embry told the Herald.