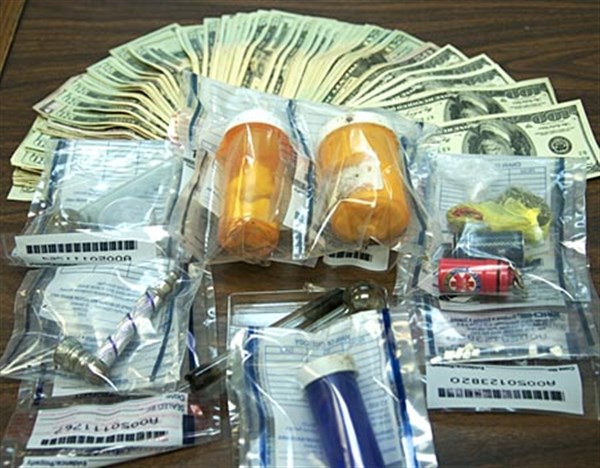 Deputies seized money and drugs during a drug raid in Coffeeville last Wednesday.


COFFEEVILLE–Two people were arrested last Wednesday morning in a pre-dawn drug raid on Rayburn Street.
Mark A. Moody and Delma Pruitt were taken into custody after a forced entry into the camper home they were residing in the well-orchestrated raid that included  almost a dozen deputies and both constables in the county.
Sheriff Lance Humphreys said the group met around 5 a.m. and coordinated a plan that focused on the plumbing in the camper after obtaining a search warrant from Justice Court Judge Steve Riley.
“One deputy’s job was to turn the valve to keep the drugs from being flushed into the town’s sewage system,” Humphreys explained.
The authorities were convinced the evidence they needed was inside after working the case for months, but Humphreys said it could easily be lost in the sewage system.
“We knew if he heard us, he would be trying to flush it,” Humphreys added.
That was the plan–strike early and enter fast and it went pretty much  as scripted except the door was well secured allowing the suspects extra time. Which meant one unnamed deputy had to dissemble the commode to recover some of the evidence.
“Some of the drugs were flushed, but they got stuck and we were able to retrieve them,” Humphreys told the Herald.
Other visible evidence of what appeared to be cocaine farther down the plumbing system was “not recovered,” according to the sheriff.
The haul both inside the commode and in other locations in the camper included almost an ounce of crack cocaine with an estimated street value of $2,500; a small amount of marijuana, 70 hydrocodine pills, and a small amount of methamphetamine.
Also seized was $2,533 in cash and a vehicle.
Moody was charged with possession of a controlled substance with intent to distribute, to-wit cocaine and possession of a controlled substance with intent to distribute, to-wit hydrocodine.
Pruitt, who is originally from Lambert, was charged with possession of methamphetamine.
During an initial appearance Wednesday afternoon Judge Riley set a $100,000 bond on Moody. The district attorney’s office also placed a hold on him for an earlier charge.
Judge Riley also set an $8,000 bond on Pruitt. She posted bond Wednesday night and was released.